Hillary Blasts Trump Over WHO Funding; Dan Bongino Shoots Down, Stomps All Over Argument in One Perfect Tweet 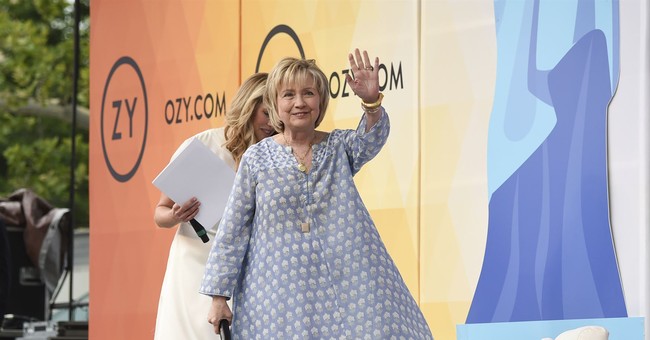 Democratic presidential candidate and former Secretary of State Hillary Rodham Clinton waves to the crowd before a conversation with Laurene Powell Jobs at OZY Fest in Central Park on Saturday, July 21, 2018, in New York. (Photo by Evan Agostini/Invision/AP)

Twice failed presidential candidate Hillary Clinton can’t seem to resist her impulse to pass judgment on every move President Trump makes. Following the President’s wise decision to halt funding to the World Health Organization (WHO) over their director-general Tedros Adhanom Ghebreyesus’ dangerous mismanagement of the coronavirus pandemic, Hillary took to Twitter to weigh in. She wrote:

@WHO is on the front lines of this pandemic, providing advice, training, and equipment crucial to saving lives—including Americans’.

Cutting their funding is not only dangerous—Trump doesn’t have the authority to do it. He should know: violating spending laws got him impeached.

Dan Bongino destroyed her pathetic provocation in one perfect tweet.

The WHO is as credible as Hillary and her dossier. They’re perfect for each other.

The WHO is as credible as Hillary and her dossier. They’re perfect for each other. https://t.co/4NSFP2asT3

Where did Hillary get the idea for her latest hit on Trump? It’s the new, Nancy Pelosi-approved Democratic talking point. A simple Google search indicates that every lamestream media outlet has published some version of it. CNBC, which has been carrying water for the Clintons forever, published an article entitled, “Trump’s WHO funding threat echoes action that got him impeached, Democrats say.” The piece sums up how the House Democrats plan to spin Trump’s decision when they try to impeach him a second time this fall. The author highlights the three main points:

They argued he would violate the same laws the administration ran afoul of when it froze military aid to Ukraine, a move that led to the president’s impeachment in the House.

In announcing the decision to pull funding from the WHO, Trump said the United Nations agency mismanaged the early stages of the outbreak.

Apparently, the left took this news rather hard. Following Trump’s announcement, MSNBC’s Chris Hayes was especially blue. He tweeted that he felt “just incredibly bleak.” In fact, Hayes hasn’t felt this bad since his “absolutely darkest moments right after the 2016 election.”

I wonder how he’ll feel when Trump wins a second term?

Anyone who was on the fence about whether defunding WHO was a good move…..