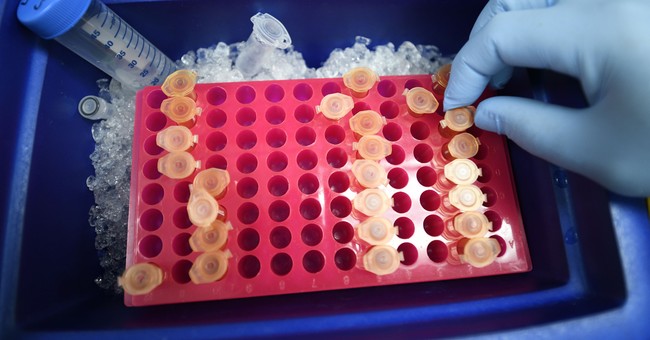 On Thursday morning, FDA Commissioner Dr. Stephen Hahn told CBS News Radio, “We’re going to announce today our first approval of a serology test that will, in laboratories, allow the labs to determine exposure in the antibodies.”

The serology test was developed by Cellex, Inc.

The letter of approval states that “Emergency use of this test is limited to authorized laboratories.” It defines an “authorized laboratory” as one which has been “certified under the Clinical Laboratory Improvement Amendments of 1988.” This letter, written by FDA chief scientist Denise M. Hinton to James X. Li, the CEO of Cellex, can be viewed here.

According to CNN, the test isn’t perfect because antibodies take a certain amount of time to develop. This is why it was approved on an emergency use basis. The benefits outweigh the risks, but if a test is performed too early, it may not pick up the presence of the antibodies.

The letter explains that the test looks for two specific antibodies, “IgM and IgG that are generated as part of the human immune response to the virus. IgM antibodies to SARS-CoV-2 are generally detectable in blood several days after initial infection (although levels over the course of infection are not well characterized). IgG antibodies become detectable later following infection. Positive results for both IgG and IgM could occur after infection and can be indicative of acute or recent infection.”

As we’ve been hearing repeatedly, in a war, you have to fight with whatever weapons are available.

Fox News medical contributor Dr. Marc Siegel spoke to Tucker Carlson on Thursday night to discuss the new test. Siegel said, “This is called point-of-care testing. Rapid testing that can give you results in just a few minutes. There are a few different kinds of tests, one where you test for the virus itself. We know that from the swabs. The other [is] where you do a blood test, you test for immunity.” He added that “Cellex was approved for emergency usage to see whether we can tell who has had this virus and who’s immune to it, so they can go back go back into society, but we are not entirely there yet.”

Siegel said he had contacted Adm. Brett Giroir, the assistant secretary for health at the U.S. Department of Health and Human Services (HHS), who informed him that “the tests that we have already, the ones that are on the big mobile units that require all of this protective equipment, they have a one out of three rate of not getting it right. They say you don’t have the virus when you actually do.”

Prefers the test developed by medical device company Abbott, which uses the company’s portable ID NOW platform and does not require a central lab for analysis, saving precious time for medical workers and patients.

That test allows doctors to swab someone’s nose or throat, insert the swab into a machine, and receive getting results in five to 15 minutes (results can take longer if a sample tests negative, but can take only five minutes if the person tests positive).

“That [Abbott] test — this is breaking news — is already around the country in 1,800 different tiny boxes that we only use for the flu that we can now use for coronavirus. It’s ready to go.”

On Thursday, President Trump tested negative for coronavirus for a second time. According to White House Dr. Sean Conley, the president had been tested by the Abbott rapid point-of-care test and the results were delivered in 15 minutes.

Once a person has developed an immunity to the coronavirus, they can go back out into the world and help America restart the economy which has been hemorrhaging jobs in the last couple of weeks.

CNBC just reported (at 8:30 am EDT on Friday) that nonfarm payrolls fell by 701,000 in March pushing the unemployment rate up to 4.4%. The consensus among economists surveyed by Dow Jones had been a drop of only 10,000 jobs and an unemployment rate of 3.7% This is the first decline in payrolls since September 2010.

America has to get back to work.