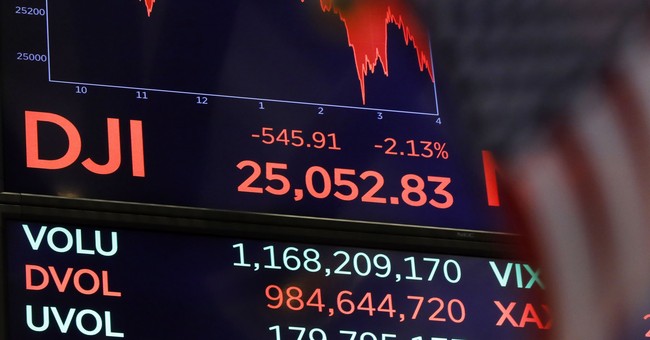 FILE- In this Oct. 11, 2018, file photo a board above the floor of the New York Stock Exchange shows the closing number for the Dow Jones industrial average. A period of relative calm on Wall Street that led to a milestone-setting September for the stock market came to a sudden, screeching halt in October. The slide snapped a six-month winning streak for the benchmark S

On January 24, the Senate Health, Education, Labor and Pensions (HELP) and Foreign Relations Committees were briefed by top administration health officials about the Wuhan virus.

On Thursday, it was widely reported that on February 13, Sen. Richard Burr (R-NC), who chairs the Senate Intelligence Committee, sold anywhere from $628,000 to $1.7 million worth of stocks, according to Senate disclosure forms. (Note: Senate Financial Disclosure information can be viewed here.)

Sleuths over at NPR “obtained a recording of him privately warning of its dangers.” Burr is heard telling a private group, “There is one thing about this, it is much more aggressive in its transmission than anything we have seen in recent history. It’s probably more akin to the 1918 pandemic.”

He [Burr] had inside information about what could happen to our country, which is now happening, but he didn’t warn the public. He didn’t give a prime time address. He didn’t go on television to sound the alarm…Instead, what did he do? He dumped his share in hotel stocks so he wouldn’t lose money, and then he stayed silent.

Maybe there’s an honest explanation for what he did. If there is, he should share it with the rest of us immediately. Otherwise, he must resign from the Senate and face prosecution for insider trading. There is no greater moral crime than betraying your country in a time of crisis.

It wasn’t long before AOC called for Burr’s resignation.

Later in the day, it was reported that Sen. Kelly Loeffler (R-GA), who was appointed by Georgia Gov. Brian Kemp to fill the seat vacated by retiring Sen. Johnny Isakson, had sold stock on the very day of the briefing. Within three weeks of the briefing, Loeffler and her husband, Jeffrey Sprecher, chairman of the New York Stock Exchange, sold stock worth between $1.2 million and $3.1 million.

The Senate’s newest member sold off seven figures worth of stock holdings in the days and weeks after a private, all-senators meeting on the novel coronavirus that subsequently hammered U.S. equities.

Sen. Kelly Loeffler reported the first sale of stock jointly owned by her and her husband on Jan. 24, the very day that her committee, the Senate Health Committee, hosted a private, all-senators briefing from administration officials, including the CDC director and Anthony Fauci, the head of the National Institutes of Health of the United States, on the coronavirus.

That first transaction was a sale of stock in the company Resideo Technologies worth between $50,001 and $100,000. The company’s stock price has fallen by more than half since then, and the Dow Jones Industrial Average overall has shed approximately 10,000 points, dropping about a third of its value.

The New York Times reported that Sen. Jim Inhofe (R-OK) sold up to $400,000 in stock on Jan. 27, in companies such as PayPal, Apple and real estate company Brookfield Asset Management.

Finally, Sen. Dianne Feinstein (D-CA) and her husband sold between $1.5 million and $6 million in stock in California biotech company Allogene Therapeutics, between Jan. 31 and Feb. 18, The New York Times reported.

Here’s what reporters are missing:

1. The stock market was extremely overbought at the time and professionals, in addition to most Americans who follow the financial markets, were waiting for at least a ten percent correction. It had come a long way in a short period of time and everyone knows markets never go straight up. This market was screaming for a shakeout from at least mid-January on. If you were to indict every investor who sold stock during this period, the number would be into the millions.

2. Burr didn’t sell his stock until three weeks after the briefing. Why would he wait 21 days? That’s an eternity in the stock market.

3. Burr addresses the accusations in a lengthy text message thread which can be viewed here. The gist of it is that the lunch which NPR portrays as “secret” was anything but. Burr writes:

This lunch was hosted on Feb. 27 by the North Carolina State Society. It was publicly advertised and widely attended. NPR knew, but did not report, that attendees also included many non-members, bipartisan congressional staff, and representatives from the governor’s office.

Every state has a state society. They aren’t “secretive” or “high-dollar donor” organizations. They’re great civic institutions that bring people in D.C. together for events, receptions, and lunches. And they’re open to anyone who wants to get involved. Like most members of Congress, I address our state society every year.

4. Loeffler and her husband have a combined net worth of over $500 million. If we take the midpoint of the $1.2 to $3.1 million range indicated on the Senate disclosure form, the third party investment manager sold stock valued at $2 million. The market has fallen by roughly 33 percent. So the Loeffler saved $700,000 by selling the stock. This equates to .14 of one percent, or .0014 of their net worth.

Most portfolios are actively traded meaning that transactions are made regularly throughout the year. In any given month, there will likely be several transactions and in periods of high volatility, there will be more.

Additionally, managing an investment portfolio of any size requires one to follow the markets on a daily basis. Just as a journalist must keep up with current events on a daily basis to remain informed, so must an investment manager. Since this is a full-time job and most investors either already have a full-time job or outside interests, they rely on the services of money managers. They turn the day-to-day investment decisions over to a third party. “Managed money” has become the norm for many Americans, even those one wouldn’t consider to be particularly wealthy.

Does anyone think for a minute that, as a U.S. Senator and socialite, Kelly Loeffler has the time to pour over day-to-day market moves and news? Late Thursday night, Loeffler tweeted: “This is a ridiculous and baseless attack. I do not make investment decisions for my portfolio. Investment decisions are made by multiple third-party advisors without my or my husband’s knowledge or involvement.”

5. According to her spokesman, Tom Mentzer, “All of Senator Feinstein’s assets are in a blind trust, she has no involvement in her husband’s financial decisions.”

Barron’s reports that the Feinsteins sold Allogene Therapeutics near it’s year-to-date low. The stock price was actually up by $2.07 yesterday, an 11.36% gain given the low price of the shares.

In April 2019, a Gallup poll found that 55 percent of Americans owned stock. Many of them saw the market becoming toppy and sold their shares.

6. There is insufficient information available about Sen. Inhofe’s transaction or the circumstances surrounding it to make a judgement.

7. The only situation that can possibly be questioned, that is even a close call, in my opinion, would be Sen. Burr’s.

When a member of Congress attends a briefing like the one that Senators on the Health, Education, Labor and Pensions and Foreign Relations Committees attended on January 24, does that mean they can’t sell stock because it would be seen as insider trading?