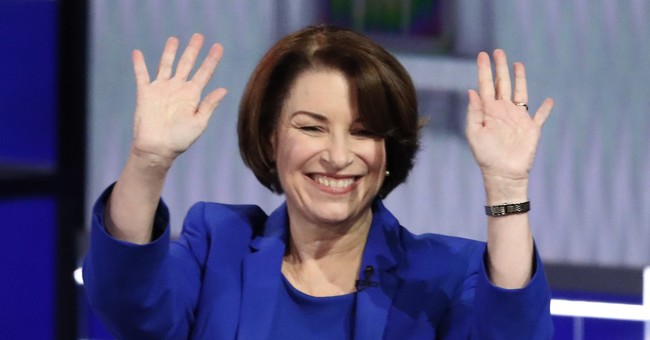 KARE11 reported that a group of Black Lives Matter activists occupied the stage ahead of a planned St. Louis, MN rally for Sen. Amy Klobuchar on Sunday evening, forcing the campaign to cancel the event.

They were protesting what they believe was the wrongful conviction of Myron Burrell during Klobuchar’s tenure as the Hennepin County Attorney. In addition to calling for Burrell’s release, the group demanded that Klobuchar drop out of the race.

The Klobuchar campaign issued a statement which read: “The campaign offered a meeting with the Senator if the group would leave the stage after being on for more than an hour. After initially agreeing, the group backed out. We are canceling the event.”

Burrell is currently serving a life sentence in the death of 11-year-old Tyesha Edwards, who was shot while studying inside her south Minneapolis home in November 2002. Burrell, who was a teenager at the time of the shooting, was convicted twice in the case: once in 2003, and again in 2007 after the Minnesota Supreme Court ordered a new trial.

In a video statement (below), current Hennepin County Attorney Mike Freeman said, “Myon Burrell was convicted by prosecutors in this office not once, but twice. Contrary to some reports, this was solid police investigation and prosecution. We believe the right man was convicted in this heinous crime. However, as we have said before, if new evidence is submitted to us, we will gladly review it.”

According to the Associated Press, there may be reason to believe Burrell was wrongly convicted. The AP reports:

The case relied heavily on a teen rival of Burrell’s who gave conflicting accounts when identifying the shooter, who was largely obscured behind a wall 120 feet away.

With no other eyewitnesses, police turned to multiple jailhouse snitches. Some have since recanted, saying they were coached or coerced. Others were given reduced time, raising questions about their credibility. And the lead homicide detective offered “major dollars” for names, even if it was hearsay.

There was no gun, fingerprints, or DNA. Alibis were never seriously pursued. Key evidence has gone missing or was never obtained, including a convenience store surveillance tape that Burrell and others say would have cleared him.

Burrell, now 33, has maintained his innocence, rejecting all plea deals.

Klobuchar may be forced to drop out of the race anyway if she fails to gain enough traction on Super Tuesday.