Another Advisor to Iran's Supreme Leader Dies; Might the Coronavirus Succeed Where Sanctions and Military Deterrents have Failed? 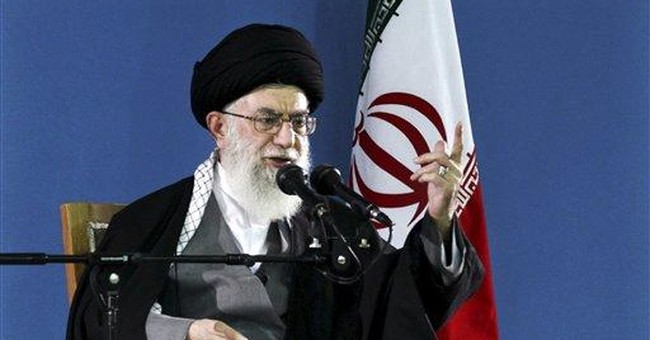 FILE — In this Wednesday, Feb. 29, 2012, file photo released by an official website of the Iranian supreme leader’s office, Iranian supreme leader Ayatollah Ali Khamenei, delivers a speech in a public gathering in Tehran, Iran. Just days before Iran’s parliamentary elections, the country’s supreme leader gave what amounted to a pep rally on the Islamic Republic’s nuclear views. Atomic technology is a pillar of “national dignity,” said Ayatollah Khamenei, and Iran must stand firm against the “bullying” pressures from the West. (AP Photo/Office of the Iranian Supreme Leader, File)

One has to wonder if the coronavirus might be the final nail in the coffin of the brutal Iranian regime.

According to Fox News, multiple media outlets are reporting that Mohammad Mirmohammadi, 71, an advisor to Iran’s Supreme Leader Ayatollah Ali Khamenei, has died from the coronavirus. Mirmohammadi served on the Expediency Council and was responsible for settling disputes between Khamenei and parliament.

His death comes on the heels of news that several high profile regime officials had either died from or been diagnosed with the coronavirus.

But here’s the problem. Here he is yesterday [one week ago at this point] with the government spokesman, briefing journalists, coughing and sweating excessively, without a mask. You can almost see him spreading it. He’s been interacting with and briefing people for days.

Deputy Health Minister of #Iran Harirchi who is infected with #CoronaVirus had a joint presser along with spokesman of the government Rabiei yesterday among journalists. A footage published earlier had raised suspicion that he might had been infected with the virus. pic.twitter.com/IWKsga06SC

Then, Nick showed a video of the spokesman one day later “looking sick without a mask, next to the industries minister, who is looking none too well either.”

Now there are suspicions that #Iran’s gov spox (left of picture) may have contracted #COVID19 from deputy health minister, who was sweating profusely next to him during a press briefing today & passed #Coronavirius on to industries minister (right of picture) in a meeting today. pic.twitter.com/HXIGGRf1id

We know how highly contagious this virus is, even among those who take precautionary measures.

After China and South Korea, Iran has been one of the countries most hardest hit by the coronavirus. Although we have no way of knowing when the disease first hit the country, Iran reported their “first case less than two weeks ago.” As of 4 am on Monday, according to Fox News, the Iranian Health Ministry “recorded 523 new cases in the past 24 hours, bringing the country’s known total to 1,501.”

Over the weekend, it was reported that Secretary of State Mike Pompeo offered Iran assistance in dealing with the coronavirus, however it was rejected. Foreign Ministry spokesman Abbas Mousavi said at a Monday briefing that, “We neither count on such help nor are we ready to accept verbal help.”

The Heritage Foundation’s Lt. Col. Dakota Wood appeared on Fox Business News last week to discuss how rapidly the virus was spreading in Iran and the country’s high mortality rate (15%*) from the disease.

In the tweet below, The Heritage Foundation’s John Cooper wrote, “If you want to be angry, be angry at dictators more concerned with saving face and preserving their regimes than protecting human life.”

(*Note: I have seen varying estimates of Iran’s mortality rate from the coronavirus. Fox News reports it at 5.5%.)

ICYMI: The #coronavirus mortality rate in a free and open South Korea is about .3%, but in authoritarian Iran, it's about 15%.

If you want to be angry, be angry at dictators more concerned with saving face and preserving their regimes than protecting human life: pic.twitter.com/hZoNd2SYEc

Regardless, it’s become clear that the government’s counter-measures are insufficient. Iran has closed schools and universities, yet they allow religious Shiite shrines to remain open. Recently, Iranians were photographed licking surfaces inside the shrines “in defiance of the coronavirus.”

Some believe that if they contract the disease, Allah will save them. Good luck with that.

Meanwhile, the regime’s inadequate response to this crisis has not gone unnoticed by the people of Iran.

According to Haaretz, “Some critics accused the clerical rulers of initially concealing the outbreak to secure a high participation rate in state-organized rallies in February. Some others suggested there was a cover-up to ensure a high turnout in February 21 parliamentary polls. Government spokesman Ali Rabeie on Thursday rejected this accusation, saying the outbreak should not be politicized.”

A high school teacher told Haaretz, “It has spread across the country. How is it possible in 10 days? Obviously they concealed facts to go ahead with their own plans. They lied to us again.”

A doctor in Qom, who wished to remain anonymous, told Reuters that well before Iran’s first case of coronavirus was announced, “We had many patients with the same symptoms. But they were treated with flu medicine and sent back home.”

No doubt the people of Iran feel betrayed by the regime yet again. Some likely feel this is a prime opportunity to make a move. As the coronavirus sweeps through the ranks of government officials, one wonders if it will reach the Ayatollah Khamenei himself, whose health we already know to be compromised. Has he been isolated? He was photographed giving a speech on Saturday.

In any case, several of his subordinates have contracted the virus and a few have already died.

Is it possible that the coronavirus can accomplish what sanctions and other deterrents could not?