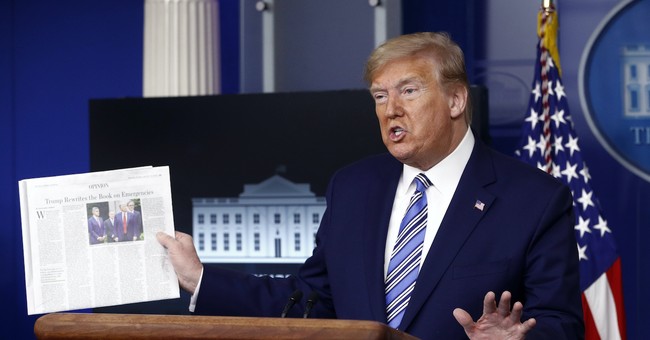 President Donald Trump holds a copy of a newspaper as he speaks during a coronavirus task force briefing at the White House, Sunday, April 19, 2020, in Washington. (AP Photo/Patrick Semansky)

This is the 34th in a series of nightly updates regarding Wuhan Virus numbers in these United States. As of 2359Z, the below charts reflect current U.S. Wuhan virus numbers.

Chart One’s data table shows Total Reported Infections, Total Reported Fatalities, and estimated Mortality Rate. The upper graph shows the reported number of reported NEW infections by date. As more test materials have made into the field and been put to good use, trend lines are becoming more clear, even if at times, counterintuitive. Today’s number of new infections reported is 25,193, which is 2,930 fewer than yesterday. The curve in new infections is still moving in the right direction.

The lower graph shows new reported U.S. Fatalities. Today, we added 2,765 to the count of American deaths, raising the total to 45,279. This was 826 more than yesterday…largely as a result of the erroneous classification procedures now promoted by the federal government. When we take out New York, then the increase is 62. This chart now has two lines. The upper is total reported Fatalities. The lower line reflects U.S. Fatalities absent the outlying New York numbers.

This chart also contains a “What If” graphic. It represents the M/R for reported infections. This chart will also be modified in time for tomorrow’s report, to reflect New York’s outsized impact on U.S. numbers. This chart now shows the M/R if we assume for each reported case of Wuhan Virus, there are 1, 2 or 3 other persons out there with it. These numbers will change going forward as we find better, more accurate information to use as the denominator. For today’s report:

Analysis: Today, we see the evidence of continued artificial tampering with the numbers. In order to produce this report and set the stance for further reporting, we had to find and distribute the 3,778 additional (and falsely attributed) China Virus deaths reported by Mayor DeBlasio. See below chart for what this looked like before DeBlasio and Worldometers “distributed” the new numbers in order to hide the spike.

This is our first report showing the outsized impact that New York has on U.S. numbers and just how much it distorts our decision-making process. We will continue to refine our calculation to give you our readership, our best assessment of what is actually happening.