Opinion: Time to Reshuffle the Supporting Cast in the Nightly Briefs 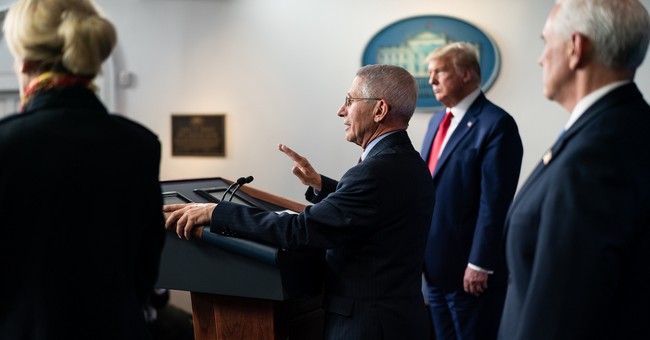 Despite the continuing opposition of the press, President Trump continues to be the focus of the daily Presidential Wuhan Virus Task Force Briefing. However, that hasn’t stopped Dr. Fauci, with the assistance of that same press, from trying to become the star of the show. At times, he’s like a little kid trying to be the center of attention as he hops back to the lectern to “clarify something” that was pretty clear already; which brings me to my next point.

It’s time to divert most of the focus away from the medical fight which, despite protestations from Fauci, is all but over (more on this in another piece). We need to move our attention to operational and economic problems. We need to focus on getting America back to work. To promote that, President Trump has formed an economic task force to reopen the economy and that’s a great idea. However, that group doesn’t need to have its own separate briefing that competes with the Dr. Fauci show. It needs to be a part of his daily Wuhan Virus Briefing…a significant part. Here’s how.

Over a period of 3-5 briefings, the emphasis needs to migrate from what Fauci has to say and move towards whichever 2, 3 or 5 economic/business advisors are brought in to make recovery points as directed by the President. Proximity is power. Over that 3-5 briefings, Dr. Fauci and COL/Dr. Birx need to be nudged to the edge of the supporting cast, but not off stage. More on that further down. During that short transition period, the President needs to put more and more emphasis on the economy, by calling those experts up to brief in their specific areas of expertise. In not more than 5 days, the medical side should end up as a mere afterthought.

“Well, Ford,” you might ask, “why not just get rid of Fauci and Birx completely? Or just hold a separate economics briefing?” That’s because the press would totally ignore the economic brief. The only reason they attend the medical brief, is to hopefully catch the President saying something that sounds like he’s either incompetent or doesn’t care about human life…or to get Dr. Fauci—COL/Dr. Birx to contradict him.

Fauci and Birx are the press “bait.” Going forward, it’s much smarter to keep them on stage, albeit at the far edges and with very minor speaking roles. There might be some flareups here or there, but this war is mostly won. It’s now time to get busy picking up the pieces, get Americans back to work and earning a living…living their lives. President Trump will need the support of the American people for that part, and these daily briefings are the best way to do that.