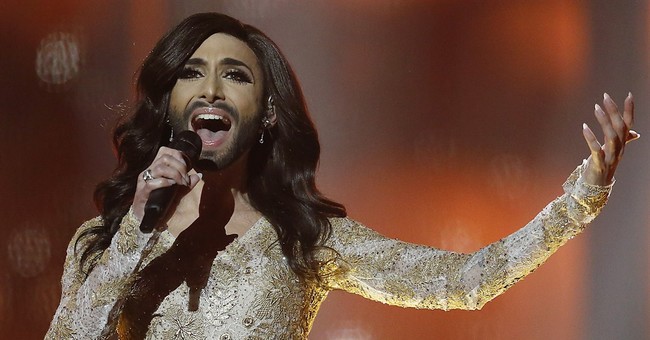 AP10ThingsToSee – Singer Conchita Wurst, representing Austria, performs the song “Rise Like a Phoenix” during a rehearsal for the second semifinal of the Eurovision Song Contest in the B

A few years taking women’s or gender studies courses isn’t going to reverse millions of years of nature. When it comes to the animal world, certain traits are going to be preferred over others. Humans, being part of the animal world, also have trait preferences.

Men are naturally attracted to women with certain bodily features. Women are attracted to men who exhibit the ability to care for and protect her and potentially, her children. When men exhibit overtly feminine traits, they begin to lose attractiveness to many a female. This can’t really be helped. It’s just nature.

However, we live in an era where too many carry the idea that masculinity is “toxic” and causes too many problems within our society. Men are encouraged, mostly by women, to be more vulnerable and exhibit more female traits. They’re called “brave” if they embrace feminine hobbies and modes of dress. This may even go so far as pushing men to physically touch other men in tender ways without crossing the line into homosexuality.

Funny enough, when men do as asked of them by these feminist women, the feminist women begin to lose interest in the men, or at the least, become uncomfortable with their lifestyle. In fact, it happened to one feminist in particular, and she decided to write about it.

According to her article in The Guardian, Emily Halnon was at a Goodwill with her boyfriend when he came across a wedding dress he really liked. Not for her, but for him. The dress was for an event where men don dresses and climb up a mountain in honor of mothers and female mountain climbers. While it was all for fun, Halnon was feeling discomfort about it, and making her feel ashamed due to the fact that she considered herself a progressive who approves of this kind of behavior in men:

I knew Ian would be among the most outrageous on the mountain. My boyfriend is aggressively fun and a flair fanatic, which I find wildly attractive on most occasions – like when he’s scaling technical slopes in jorts and a cat shirt or skiing the steepest lines in the Pacific north-west in space tights.

But I found myself unexpectedly uneasy with his new fondness for feminine frocks – a reaction that challenged the progressive ideals I’d prided myself on for decades. I’d long thought I was contributing to a progressive shift in how we define masculinity, finally allowing men to be emotional and vulnerable, or to ask for help, or to hug their male friends … or to wear dresses.

She later adds that she’s felt this level of discomfort with her boyfriend before:

This was not the first time I’d found myself a little uncomfortable with the sight of Ian in women’s wear. It’s not an unusual sight to spot him sporting a skirt, dress, or sarong at a party, picnic, or trailhead. He uses his unconventional apparel as a display of his individuality and a reflection of his fondness for fun. I adore both of those qualities, but I was realizing I was less fond of seeing them exhibited through floral numbers or tight sequined garments or wedding dresses.

While it was attraction-at-first sight with Ian, his closet full of feminine gear put a tiny dent in his desirability from the very beginning of our relationship. Not enough to stop me from acting on my huge crush, but enough to notice there was an unexpected disconnect between what I thought I was OK with a man wearing, and what I actually found appealing on his body.

At one point, she found that when it came to her feelings about masculinity don’t meet with reality:

As we interrogated our feelings about masculinity, we recognized gaps between our ideals and reality. I’m quick to blame men for perpetuating toxic behavior, but in this case, I, the woman, was part of the problem.

Halnon seems to be confused by her own progressive ideals, which is pretty typical for someone who holds them. She seems to think that she’s the problem because she wants more masculinity in her man, but that’s not the problem at all. She’s subject to her own nature, and nature is the way it is because it’s the best way for our species to survive and prosper.

Masculinity, whether feminists like it or not, is a societal necessity. Men naturally protect, provide, and do the dirty, physically demanding work. This requires an element of daring and willingness to embrace danger. It’s embedded deep into the male code.

What’s more, it’s embedded deep into the female code to desire that kind of daring and danger.

The issue rises when men exert power over women in order to physically harm them, intimidate them, or use their masculine gift for malicious reasons. However, only crazy people get mad at a man for protecting innocent people, doing work that requires great physical effort, or squashing the scary bug at the woman’s request. That was masculinity in action the way it was meant to be used.

Feminists can pretend they don’t desire this for themselves, but they absolutely do. Displays of femininity from a man may inspire feelings of humor or sometimes tenderness, such as when a man helps paint his injured wife’s nails or dances in a tutu with his daughter in order to bond. These are moments when masculinity is playful, but playful is about as far as nature would have this go. To actually embrace these feminine things as a lifestyle is in direct defiance of a man’s internal coding. It is unnatural, and as a natural creature, females will find this offputting. Even the ones who encourage it.

Comedy Gold: Cher Stumps for 'Joe' Cuz He's 'Gonna Get the Freedoms Back' That Trump Took Away From You, America
Mike Miller

Opinion: Rush Limbaugh; The Measure of a Man’s Courage in the Face of Adversity
Mike Ford

Flight to Crazytown: All Heck Breaks Loose on a Plane to New York, and It's a Masterful Metaphor for America
Alex Parker