President Obama has his “executive action” pen out again. Frustrated with his inability to negotiate anything with Congress (not that he even makes a reasonable effort) he wants to take matters into his own hands to control gun ownership in the United States.

This is how The New York Times reported on his executive action proposal from Tuesday of this week.

As tears streamed down his face, President Obama on Tuesday condemned the gun violence that has reached across the United States and vowed to curb the bloodshed with or without Congress.

First of all, I am not a gun nut. I have used firearms and at one time had obtained the NRA Sharpshooter classification.  I respect guns and what they can do.  More importantly, I respect the U.S. Constitution. I believe the 2nd Amendment is pretty clear.

For example, does an individual have the right to keep and bear arms such as a nuclear weapon, surface to air missile or bazooka?  I have not heard anyone with the NRA or anyone else make that argument.  Machine guns and other military types of automatic weapons are already illegal and have been since the 1930’s.  In fact, the use of these weapons by gangsters such as Machine Gun Kelly, Baby Face Nelson and John Dillinger led to the passage of the National Firearms Act in 1934 that made them illegal in the U.S.

If anything is going to be done that might infringe on the right to bear arms in the Constitution it would seem that it should be clearly demonstrated to be a reasonable regulation. To meet that standard government should have to show that vast numbers of the public are being killed (or could be killed) to outweigh the individual constitutional right.  This is clear with an atomic weapon, machine gun or SAM.  In other words, the public’s interest to safety outweighs the individual’s right to keep and bear arms.

If it is done it should also clearly be done by the Congress in conjunction with the President. There is a reason the Constitution established both an Executive and Legislative branch. They are supposed to be co-equal partners in governing and in protecting the rights of the people.

I often say, “Context is everything in assessing anything”, so let’s put “gun violence” in the United States in context.

First, despite all that President Obama, Hillary Clinton and the media talk about gun violence, the reality is that murders by firearms have actually dropped across the United States since Obama became President in 2009.

Here is a graph showing murder victims by firearms. (Note: the most recent data for all the charts below from government sources is 2013).

Homicides in which a gun was used are down 8% since Obama took office. 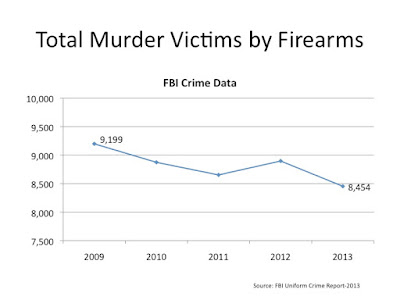 In addition, despite the fact we hear a lot about the need to control assault rifles, the reality is that rifles of any type are rarely used to kill anyone in the United States. There were only 285 murders committed with a rifle in 2013. That is down 19% since Obama took office. Handguns were used 5,782 times. 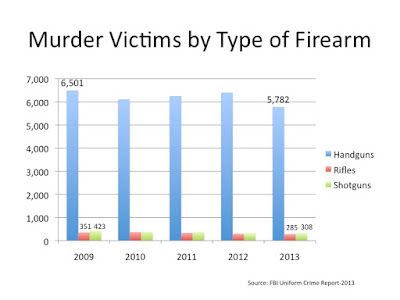 It is also true that firearms are much more likely to be used to commit suicide than to commit a homicide. In fact, almost 2/3 of deaths from firearms in the first five years of the Obama administration were from suicides. 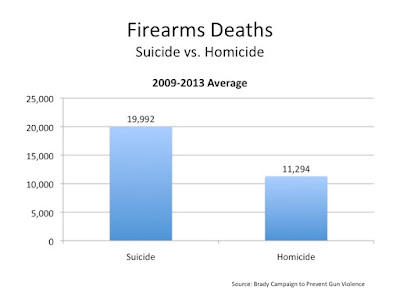 How do gun deaths compare to other causes of death?

Homicides caused by guns is not even close to other causes of death including drugs, poisoning, motor vehicle accidents, falls and alcohol. For example, there are over 4 times as many deaths by drugs as there are homicides by guns.

What sense is it then for many liberals to favor legalizing drugs but banning firearms? 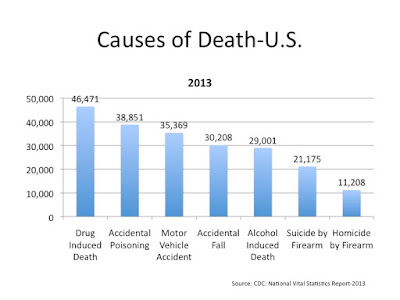 And why is it that Barack Obama spends so much time on the subject of guns but spends so little time trying to change the culture of violence that exists within our community of young, black males?

In fact, in 2013, almost 50% of the deaths of young, black males between 15 and 24 years of age were the result of homicide. The comparable number for young white males of the same age—8%. 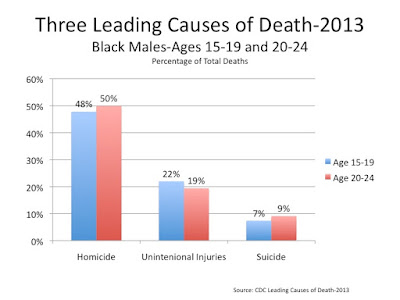 Finally, we see and hear a lot about police violence directed at African American males.

CDC statistics on causes of death indicate that the overall homicide death rate for all black males is 35.1 per 100,000 with 29.4 of those being through the discharge of a firearm. 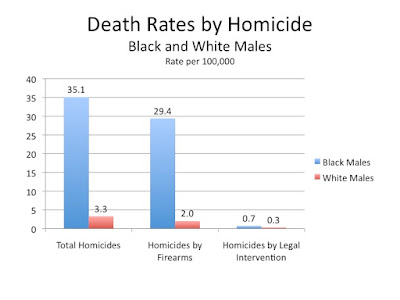 The comparable numbers for white males?

Therefore, the overall homicide rate for black males is 10 times that of white males.

More interesting, about 10% of total homicides involving white males come as a result of police action. For blacks, only 2% of homicides are the result of legal intervention.

Therefore, if a black male is the victim of a homicide, there is a 98% chance it was by someone other than a police officer. If it is a white male, it is a 90% chance.

Context is everything when assessing anything.

Even when it comes to the subject of guns.