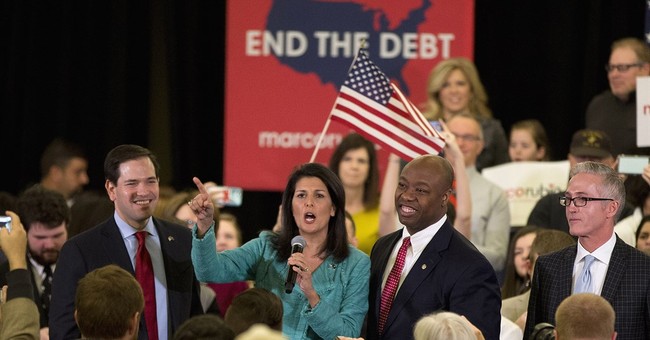 During this time of Wuhan flu lockdowns and layoffs across the country, one politician is sharing a hopeful message for any American afraid that the American Dream has left them behind.

In a new book, Opportunity Knocks: How Hard Work, Community, and Business Can Improve Lives and End Poverty, South Carolina Senator Tim Scott (R) tells the story of how adults in his life helped him see America’s promise.

As one of only three black members of the U.S. Senate and the first to hail from his state since Reconstruction, the Republican lawmaker is all too aware of the challenges that go along with that mantle. And his words and actions have been front-and-center in the pages of RedState since he won a special election in 2014 for the Upper House.

Over the weekend, Sen. Scott sat down for an interview about his book with former Governor Mike Huckabee on his TBN show.

He started by explaining how he was able to overcome a childhood that most people, at first glance, might consider disadvantaged. Scott said it was anything but:

I had the good fortune of being raised by a powerful, praying mother. Unfortunately, in a single-parent household, mired in poverty.

My mother said that I was always optimistic [as a young man], but was a bit distracted from the core principles of success, education and faith. As a matter of fact, as a freshman in high school, I flunked out.

He went on to tell Gov. Huckabee that it was a manager at an early job, at a Chick-fil-A restaurant, who inspired him to turn things around.

It also never hurts to have people like former South Carolina congressman Trey Gowdy (Scott’s co-author on a 2018 book) singing your praises.

Sen. Tim Scott and Rep. Trey Gowdy joined @FaceTheNation to talk about their new book, "Unified: How Our Unlikely Friendship Gives Us Hope for a Divided Country" https://t.co/Wp1L4eCjs5 pic.twitter.com/MFrpeHXeai

Gowdy told the Post And Courier newspaper that he and Scott had originally planned to write this book together, too.

….Gowdy said discussions about this book began years ago when he and Scott met with an agent in Charlotte. Gowdy was anxious to write another book with Scott, but he said everyone at the table quickly realized the story that needed to be told was Scott’s alone.

Gowdy added, “It’s not a Republican book. It’s a book for people who want to be inspired.”

I couldn’t say it any better than that.

Sen. Scott also spoke to my RedState colleague, Jeff Charles, in an exclusive interview last December, which is worth a read. In it, he talked about his “Opportunity Zones” legislation — which partly inspired his book’s title.

Opportunity Knocks dropped on April 14 and is available nationwide.

Meanwhile, get ready to be inspired by this clip from “Huckabee”:

You can also watch Sen. Scott’s full interview here [forward the video to -51:47].

Karine Jean-Pierre Has Her Predecessor's Words Thrown Back at Her
Townhall
Rachel Dolezal trends because she has an Only Fans account and OMG-LOL the comments
Twitchy
Brian Kemp Goes for the Jugular as Stacey Abrams' Campaign Continues Its Freefall
Redstate
The Morning Briefing: The Drag Queens Hanging Around Kids Are Skeeving Me Out
PJ Media