Kicking Us While We're Down: An 18-Wheeler Crashes in Texas, and Fire Wipes Out the Load - of Toilet Paper 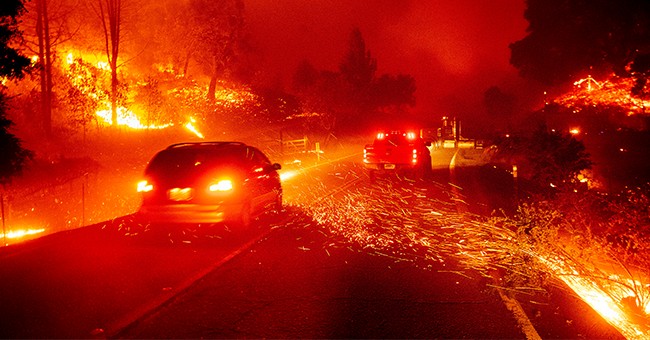 Embers fly across a roadway as the Kincade Fire burns through the Jimtown community of Sonoma County, Calif., on Thursday, Oct. 24, 2019. (AP Photo/Noah Berger)

But if you cry, for goodness sake, don’t use tissue.

On Wednesday, April 1st, a tractor-trailer crashed near Dallas.

What’s more, not only did the 18-wheeler end up on its side, but it caught fire.

And that precious cargo went up in flames.

Precious, indeed, as the truck was transporting tranquility.

As reported by Denver’s ABC7, roasting on the roadside were thousands of rolls of toilet paper.

At a time when that fluffy multiple-ply treasure is so sought after, we’re faced with the spectacle of the hot commodity burning on westbound I-20.

The driver was on his way to a rest stop when the spill occurred — a rest stop where, perhaps, he may have found occasion to open a pack of that merciful merchandise.

But have mercy — the mass of majesty melted. Or at least, such was the case for any cellophane packaging.

As for the driver, KXAS indicates he wasn’t seriously hurt.

Neither was his dog.

That’s certainly great news, but from the AP about the TP, here’s some horror to hurt your heart:

The toilet paper appeared to be large rolls typically used in stores, restaurants and other businesses. Texas Department of Transportation officials said the load of toilet paper “burned extensively,” according to Dallas TV station WFAA.

TxDOT officials estimated that the red-hot rolls would “take authorities ‘some time’ to clean up.”

Bathroom tissue having to be cleaned up — that’s called “full circle.”

In this time of empty shelves, let’s have a moment of silence for the loss.

Gone but not forgotten.

To borrow a phrase from politics, let’s face it: Toilet paper does the work Americans don’t want to do.

No Makeup, No Auto-Tune: Here’s a Roundup of Celebrity In-the-Raw Isolation Videos for Your Pandemic Pleasure