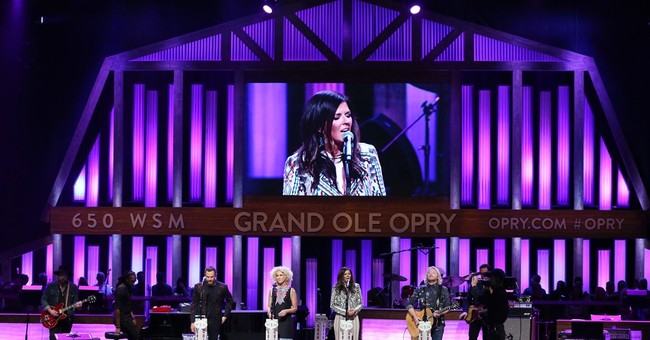 A celebrated singer has died of complications from the coronavirus.

He’s definitely a celebrity to me.

And if you grew up around country music, he will be to you, too.

Country singer Joe Diffie bounded onto the national music scene in the 1990’s, with smashes such as the great “Prop Me Up Beside the Jukebox (If I Die).”

Like the aforementioned chart-topper, some of the Oklahoma native’s hits offered a quirky bit of humor. Cases in point: “Bigger Than the Beatles” and his alien invasion ode, 1994’s “Third Rock From the Sun.”

And none was more comedic than 1995’s new holiday standard, “Leroy the Redneck Reindeer.”

But Joe knew how to get serious, too — his ballad, “Ships That Don’t Come In,” offered the following:

On Friday, the 61-year-old with 13 albums and more than 20 Top 10 hits under his belt confirmed he’d tested positive for COVID-19 and was receiving treatment:

“I am under the care of medical professionals and currently receiving treatment. My family and I are asking for privacy at this time. We want to remind the public and all my fans to be vigilant, cautious and careful during this pandemic.”

Joe leaves an indelible mark on American music and its fans.

During the 90’s, amid an high-rolling country wave, he wrote hits for artists such as Tim McGraw, Jo Dee Messina, and Conway Twitty.

1993 saw his first Grammy nomination — for a duet with Mary Chapin Carpenter, “Not Too Much to Ask.

For the song “Same Old Train,” along with Merle Haggard, Randy Travis, Clint Black, Patty Loveless, and others, Diffie took home the 1998 Grammy for Best Country Collaboration with Vocals.

Through his songs, Joe delivered a personality so big that it was enshrined in country star Jason Aldean’s 2013 single “1994,” the chorus of which consisted of the chant, “Joe, Joe, Joe Diffie!”

At the time, Diffie told CMT News that he was surprised that Aldean made him the focus of a song.

“It’s really an honor. It’s kind of flattering, yet uncomfortable at the same time,” he said. “Talk about unexpected, you know?”

“I was like, ‘You gotta be kidding me.’ It’s pretty flattering they went that far with it. It’s one thing to hear a song title or your name mentioned, but when it started into the ‘Joe, Joe, Joe Diffie’ part, that’s cool right there,” he said.

Joe was an inductee of the Oklahoma Music Hall of Fame and a 25-year member of the Grand Ole Opry.

His last solo release was 2010’s The Bluegrass Album: Homecoming.

Fellow artist Travis Tritt, who toured with Diffie during both singers’ heyday, posted a remembrance of his lost country pal:

I just learned that @JoeDiffieOnline has passed away due to complications from the Coronavirus. Joe was a friend and touring partner with me in the 90’s. This comes as a huge shock to all of us in the country music community. Deepest condolences to Joe’s family, friends and fans.

Just weeks after the passing of Kenny Rogers, sadly, the world loses another indelible voice — this time, to a planetary pandemic.

And if I may say so, his was a great voice indeed.

Through a chance circumstance, I once found myself alone with Mr. Diffie, just standing outside. And he was singing to himself.

And boy, did it sound good.

Sing with the angels now, Joe.

Dolly Parton Remembers Her Dear Friend, the Late Great Kenny Rogers: ‘I Loved Him as a Wonderful Man’