Pro-Life Students in Washington Are Treated to Indecent Exposure, Self-Pleasure, and Praise to Satan 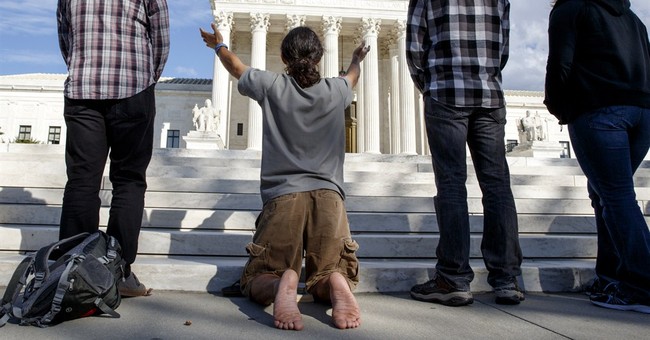 FILE – In this Oct. 4, 2014 file photo, as the U.S. Supreme Court begins its new term this week, pro-life advocates hold a prayer vigil on the plaza of the high court in Washington, Saturday, Oct. 4, 2014. The group, Bound 4 Life, has come to the court for ten years to make a silent appeal against abortion. Abortions have declined in states where new laws make it harder to have them – but they’ve also waned in states where abortion rights are protected, an Associated Press survey finds. Nearly everywhere, in red states and blue, abortions are down since 2010.(AP Photo/J. Scott Applewhite, File)

On Saturday, students praying outside a Washington state Planned Parenthood got treated to a bevy of responses including praise for the Dark Lord.

Autumn Lindsey, leader of Whatcom Community College’s Students for Life, recounted some of the group’s experiences.

SFL was at the Bellingham clinic as part of its “40 Days for Life” campaign, whereby they hope to speak encouragement to women considering abortion.

But to hear Autumn tell it to The Daily Caller News Foundation, that doesn’t always result in kudos:

“We have people constantly scream at us or flip us [off while] driving by.”

And here’s something you (hopefully) don’t see every day, as stated by TDC:

One man masturbated in a car “towards the group” as his friend drove slowly by the protesters, [the press release] said.

Autumn called that one “unheard of.”

“It has only happened to us once,” she noted, “and personally, I have never heard that happen anywhere else.”

Another heckler yelled, “My body, my choice” — while flashing everyone.

As seen in the video above, one girl pulled up in her car to school the organization and give props to the Prince of Darkness.

She shouted out the window:

“Satan is the one true lord! Satan, the Dark Lord.”

Perhaps she believed she was really freakin’ everybody out.

“Do you have a sweet baby back there?” one of the students asked.

The Whatcom crew explained that they were there to pray for people.

The driver provided a correction:

“We don’t need your prayers.”

She closed with a callback:

According to Autumn, Beelzebub gets mentioned “more than you would think.”

The press release also reported other reactions, such as people shouting “threateningly in one young student’s face, calling him a ‘c—s—er.” And a man throwing a glass vial that exploded as he bicycled past.

It’s a bit intimidating, as conveyed in the statement:

“This kind of intimidation causes some our volunteers to feel uneasy to sign up to pray for mothers and preborn children during a 40 Days for Life event. We are only 11 days in, and we have already been bullied and threatened to the point where our volunteers are nervous to go alone.”

“[W]e will not back down because this just demonstrates how evil the abortion industry is. We will stand united together and not let the bullies stop us even though the violence of abortion is celebrated by increasingly violent people.”

“Whatcom Students for Life bravely stood up against the threats of intimidation and the obscenities hurled at them by violent pro-choicers. Abortion advocates are becoming more violent against those who advocate for the innocent, but we will not be silenced.”

I can’t help but think those attacking pro-lifers in various extreme ways largely results from a misunderstanding of intention, perhaps courtesy of their individual bubbles.

Whatever the reason, some are clearly greatly angered.

Such was evidently the situation last year, with a Pennsylvania state legislator badgering an elderly woman, AKA “an old white lady”:

This is not the first time @briansimspa has harassed pro-life women.

"I’ve got $100 to anybody who will identify these three, and I
will donate to Planned Parenthood"https://t.co/ZS61gIFosn pic.twitter.com/R77mqyhsLR

He’s plainly not a warm and fuzzy guy; consider how he welcomed Mike Pence:

OFFICIAL WELCOME: @MikePenceVP let me be the first to officially welcome you to the City of Brotherly Love and to my District! We’re a City of soaring diversity. We believe in the power of all people: Black, Brown, Queer, Trans, Atheist, & Immigrant. So…get bent, then get out! pic.twitter.com/G9eLrXgeVn

There was also this, seven months prior:

It would be a shame if everyone Retweeted this and exposed the identity of this tolerant leftist. 🤦‍♂️pic.twitter.com/Yn7qzbyNYI

It’s been said over and over, but it bears rampant repeating: In the political discourse of America, we’re in desperate need of civility.

Such was the case in Washington Saturday. And Pennsylvania last year.

And so many other places and times as of late.

We’re a great nation; but we need to be greater.

Woman Is Dumped by Fiancé for Being ‘Too Fat.’ She Loses Weight and Becomes Miss Great Britain

Strange and Terrible: A Policeman Shoots to Death His Fellow Officer in a Game of Russian Roulette. Reportedly, He Claimed They Were ‘in Love’