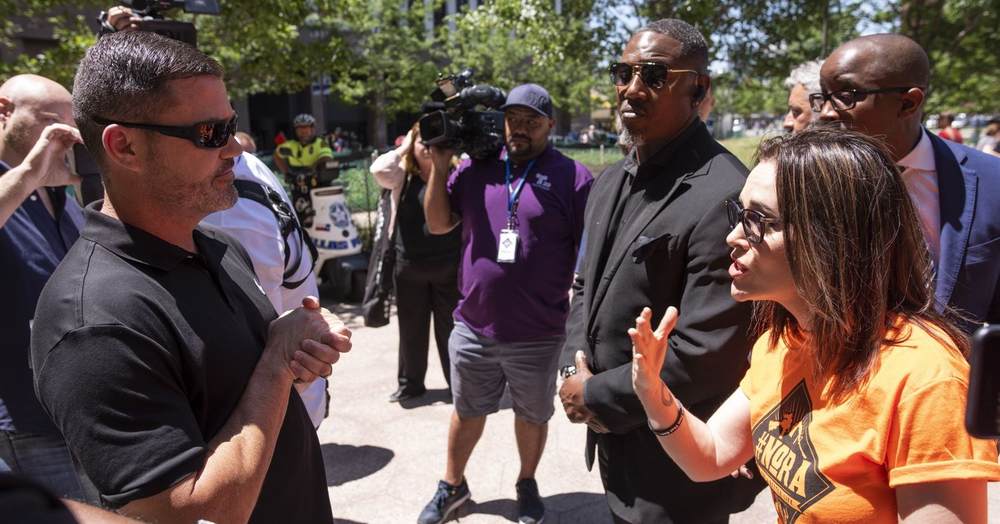 Actress Alyssa Milano of “Charmed” fame has become a very vocal activist on many of the Hollywood protest fronts like #MeToo ( although she did hit a snag with her fellow Charmed co-star Rose McGowan over that) and now, #NoNRA.

So naturally, Ms. Milano and a whole bunch of her compadres who think as she does, were in Dallas, Texas this weekend for the NRA Annual Meetings.

What could go wrong?

Well according to the Daily Wire…….

A member of the National Rifle Association visited Alyssa Milano’s anti-gun rally being held just outside the NRA’s national convention in Texas, and ended up in a bizarre confrontation.

After jokingly asking her bodyguards whether they were armed — it turns out, ironically, that they were — suddenly one bodyguard turned angry and forced the man back to the sidewalk, even though the man was on public property and was not there to counter-protest.

The gentleman’s name that was forced back to the sidewalk is Will Haraway and he is an NRA member and handgun instructor according to his Twitter bio. Alyssa did engage with him for a bit, for which kudos should be given.

Yet the reason this rally was being held was as a counter-protest to a convention being held with people who are interested in preserving their Second Amendment rights. Controversy ensued.

Were Ms. Milano’s security people armed? Will Haraway tweeted at Alyssa when she said her “personal bodyguards” were not.

She is lying. All of us who know what a handgun looks like under a jacket know he was armed. #Hypocrisy https://t.co/8UdedPsLqd

She then followed up with this tweet that event security was.

This was event security, not my bodyguard. But regardless, this security guy has had training and passed a background check. These are the common sense gun reform policies we are fighting for for everyone.

I just have a couple thoughts.

How does Ms. Milano know if ANY of the security personnel have gone through any training? Background checks? Did they go through NRA training, which is offered throughout the country and has trained millions of Americans?

Also, even if her personal bodyguard is not armed with a gun, what a luxury that she can have someone follow her around and protect her from anyone meaning her harm with something other than a gun.

Which is the whole reason for the existence of the Second Amendment. Being able to protect yourself EVEN when you cant afford to pay someone to do it for you.

I hope she does a little digging, though, to explore the lack of consistency of those who think as she does.