U.S. to Russia: We Can STILL See Your Bombers from Sarah Palin's House 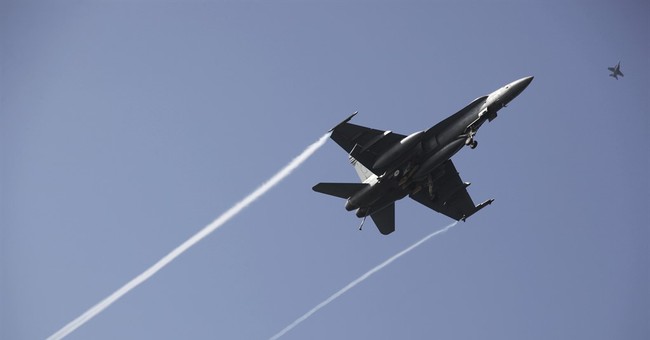 As we reported on Tuesday, Russia has been sending long-range bombers on flights that took them mighty close to Alaska.

Turns out, those pesky Russians are still at it.

There are scant few details being circulated about the Wednesday and Thursday evening pleasure flights. But we know quite a bit about the events of Monday and Tuesday.

According to Fox News, two nuclear-capable Russian TU-95 Bear bombers were first spotted on Monday evening flying within 100 miles of the coast of Alaska. Two U.S. F-22 fighter jets were scrambled to intercept the bombers, with the F-22s flying alongside the TU-95s for a good 15 minutes before the Russians returned to an airbase in Anadyr, some 1,000 miles away.

The Tuesday night incident was somewhat less dramatic. Again, two TU-95 Bear bombers flew close to the U.S. border, this time coming within 36 nautical miles of the mainland. The U.S. military response was more restrained, merely deploying an E-3 (AWACS) surveillance aircraft to keep an eye on the Russian fighters.

All of the incidents have taken place within the Alaskan Air Defense and Identification Zone (ADIZ), which is the airspace around the U.S. and Canada. Aircraft entering the ADIZ must radio their planned course and destination; the Russians, presumably, did not extend this courtesy to their hosts.

This is the first time Russia has sent bombers so close to the U.S. since President Trump took office. It might mean nothing at all, but coming on the heels of Secretary of State Rex Tillerson’s comment last week that U.S.-Russian relations were at a “low point”, these incidents certainly feel very Cold War-esque.

Sounds like it’s time to get Mav and Goose on the case.

The World Has Gone Crazy
Townhall
New York Governor Kathy Hochul tweets about grilling for a barbecue and LOL
Twitchy
Sen. Kennedy Speaks for All of Us as He Takes Apart Dems for Passing Manchin-Schumer Bill
Redstate
Gaslighting: How the Mainstream Media Tries to Drive You to the Left
PJ Media