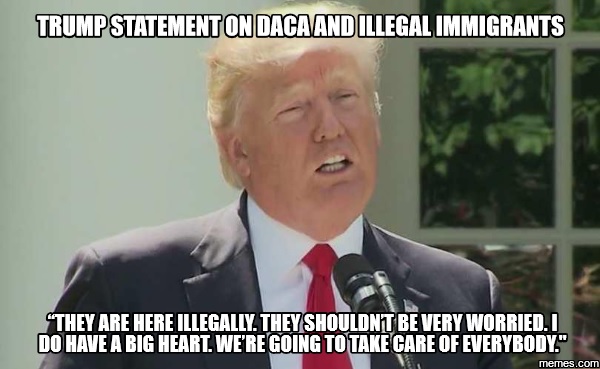 When Donald Trump issued an executive order in Sept. 2017 rescinding the Deferred Action for Childhood Arrivals (DACA) order issued by Barack Obama, he was cheered by his adoring fans for appearing to keep one of his campaign promises regarding the illegal immigration problem. However, as the old saying goes, appearances can be deceiving.

The reason I call it deceiving is because Trump’s order was merely a technicality—sort of a Rescind-In-Name-Only moment—used to buy the time necessary to make DACA permanent, which has been his “big heart” goal from the beginning.

Of course, any permanent legislation needs to come from Congress, which should have been problematic for Republicans who campaigned for years against Obama’s handling of illegal immigration. But in today’s Republican party—owned and operated by Trump—such commitments have become secondary to the requirement to please Dear Leader.

For example, just days after Trump’s deceptive order, Mitch McConnell went on record in support of negotiation with Democrats and the president—but I repeat myself—to save DACA and create an amnesty plan and eventual citizenship for approximately 1.8 million DREAMers.

Though past attempts have failed, election-season fever is sweeping Washington, so Trump and Republican party loyalists are making another push to get the job done.

Wait a minute! I though Trump promised us that Mexico was going to pay for the wall. I suppose that’s just another in-name-only moment for the New York liberal.

Back to the House proposal. DREAMers can apply for “nonimmigrant status” which is essentially a newfangled way to say visa. The extra visas necessary to handle these requests will be available due to new restrictions that will lower the number of legal immigrant applications, which means legal immigrants will be effectively moved to the back of the line.

But that’s not the worst part.

Once obtained, these visas become the first step on a pathway to citizenship, which means that years down the road, 1.8 million illegals—probably more—will have jumped the line to US citizenship ahead of legal immigrants, despite the rhetoric from Trump and the GOP claiming otherwise.

Though this proposal may or may not pass, making DACA permanent and creating a pathway to citizenship are broken promises. But as I wrote a few days ago, breaking promises has become a job requirement in the age of Trump and today’s GOP.