United Socialist States of America May Be Closer Than You Think 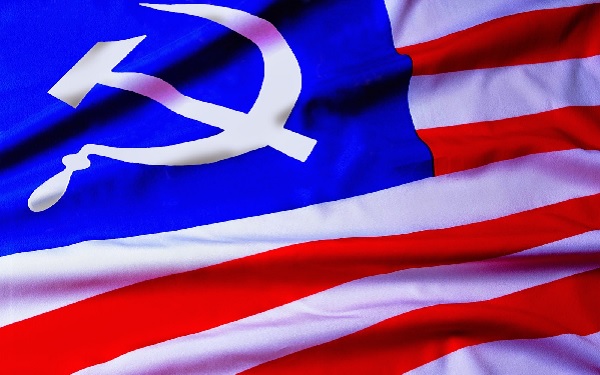 When Bernie Sanders recently announced his Democratic-Socialist plan to give every American “who wants or needs one” a lifetime government job, it was seen by many as nothing more than the ramblings of a left of the left-wing loon, but as I pointed out in an article I wrote about the announcement, Bernie’s Marxist beliefs are gaining in popularity and a majority of millennials now reject capitalism.

Considering Bernie’s plan, I found it rather interesting to hear Hillary Clinton at the 2018 Shared Value Leadership Summit in New York City yesterday where she was interviewed about her 2016 presidential campaign. When the interviewer pointed out to Hillary that she was the only Democrat candidate who was asked if she believed in capitalism—because Bernie clearly didn’t—he also asked her if she felt that it hurt her campaign.

“Probably. It’s hard to know, but if you’re in the Iowa caucuses and 41 percent of Democrats are socialists or self-described socialists, and I’m asked are you a capitalist, and I say yes, but with appropriate regulation and appropriate accountability, that probably gets lost in the ‘oh my gosh, she’s a capitalist.’”

She was wrong of course because it didn’t cost her. Hillary won the Democrat nomination over Bernie, and she won the popular vote in the general election over Trump. However, she was right about the “socialists” part of her answer. And it’s not this lame attempt at blame shifting that I found the most interesting, it was the fact that Hillary said that being a capitalist is what cost her the presidency.

The Democrat party has indeed begun to align itself with the ideals of socialism. From calls to nationalize healthcare to repealing the Second Amendment, Democrats have embraced the ideals promoted by the likes of Karl Marx, Joseph Stalin, and Chairman Mao—who murdered hundreds of millions of their own citizens to advance socialism and communism.

This metamorphosis of the Democrat party is troubling enough in its own, but it’s made worse by feckless big-government Republicans brandishing the word “conservative” to hide the fact that they are also socialists working in one accord with their Unibrow Party counterparts. Just like the Democrats, Republicans will advance any ideology necessary, including socialism, to save their cushy jobs

With a Blue Tsunami warning in effect for November, and with the GOP’s “party of no” approach to elections, America could be on the verge of witnessing the death of capitalism and the Constitution and the rise of the United Socialist States of America . . . possibly as early as 2020.

Undercover Footage: Women Drugged with Xanax Before Speaking to Abortionist
Townhall
Ilhan Omar dances on a stage sponsored by a 'greedy' corporation that's an enemy of The Squad
Twitchy
DeSantis Fires Back After Gavin Newsom's Pathetic Anti-Florida Ad Is Revealed
Redstate
Five Tips on How to Have Fun AND Annoy Your Commie Neighbors on the 4th of July
PJ Media