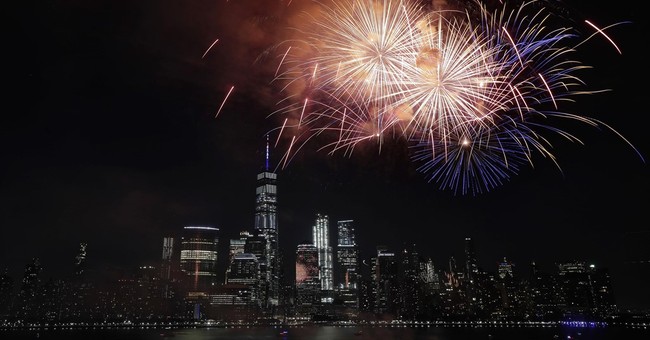 With the New York City skyline in the background, fireworks explode over the Hudson River during the Jersey City Fourth of July fireworks celebration Tuesday, July 4, 2017, as seen from Jersey City, N.J. (AP Photo/Julio Cortez)

Yesterday, while beginning to harbor deep concerns about my manhood and considering the possibility I may actually be going gay, I had, or rather, encountered an epiphany.

Because of the Wuhan virus, I’ve been home for a month now. I’ve been burning through my leave balance at work while avoiding going the ‘work at home’ route. I spent three years strategically and stealthily removing myself from ‘critical personnel’ status and being able to give up my employer-supplied phone and laptop and I have no real desire to go back in that direction. So a month’s vacation has been a bit of a godsend that I’ve used to finish out a 700 s.f. basement and create an actual office for myself and a real home gym.

Earlier this week, my state’s governor, nominal Republican Larry Hogan mandated that, starting today, anyone going to any place outside the home had to wear a facemask. Because I live very close to West Virginia, I vowed to not spend another dime in Maryland until Hogan is replaced by a Democrat who can at least claim that he believes in what he’s doing. This is critical to how I came to question my sexual identity. I needed a piece of window sill so I decided to visit the Home Depot in Ransom, WV. In Maryland, Home Depot has imposed a rather stupid policy of counting shoppers in and out. When my son and I first saw the line of people spaced neatly 6-feet apart waiting to get into the Home Depot in Frederick, MD, a couple of weeks ago, we both agreed that we would have to be as gay as the holidays to stand in line to get into a freakin Home Depot when Lowe’s, at least of this writing, is still acting like it is in the business of selling sh** to people.

It never occurred to me that a Home Depot in WV, which has had 500 Wuhan cases and 16 deaths — the latter makes Wuhan less dangerous than adultery in WV — from the dread virus would have the same idiot f***ing policy as the one in the People’s Republic of Maryland. When a surly, obese, bemasked person of uncertain gender in a soiled corporate apron directed me to the back of the line I was dumbfounded. At first, I walked back to my truck. Then I realized that without a single 6-foot section of wood, my project was at a standstill. So I got in line. And standing there I had plenty of time to contemplate the degraded state to which I had fallen. From an infantry officer, a veritable centurion, a warlord, to standing in line to get into a f***ing Home Depot in Ransom, WV. I could not reconcile what I was doing with who I was…and yet I was doing it…so obviously I’ve been working in DC for too long and the constant exposure to the lack of manliness must be having a long-delayed effect. Sort of like mesothelioma but for sexual identity.

There, having hit rock-freaking-bottom, I encountered the epiphany.

A burly guy with his kid were a couple of folks ahead of me; he had the mountaineer-in-the-building-trades look. He was talking to another guy about how stupid everything was because of the infestation of Chinese Lung AIDS. Maybe, said the bearded guy, this will be over by the Fourth of July so we can celebrate our freedom. You could feel the earth shake from the irony in his tone.

This virus is dangerous to a smallish number of people who are also vulnerable to a lot of other diseases. Overwhelmingly, the data show that something more than 30 times the number of people who test positive for the Wuhan virus get infected and either have no symptoms or symptoms so minor that they don’t recall having the malady. We can argue over whether this a regular flu or plus-sized flu but only clowns are claiming this virus has some extraordinarily high mortality rate. In fact, the US mortality rate is driven by exactly one state, New York, which is openly and dishonestly juicing its mortality data to make a grab for federal money to fill a $6 billion-and-growing hole in the state budget. The ‘social distancing’ craze is a non-falsifiable presumption, not a fact. If there is an increase in new cases then ‘social distancing’ isn’t being observed. If the cases go down, then it is. There is zero evidence of this; it is an assertion in the absence of evidence. The experience of the USS Theodore Roosevelt shows that 6,000 men and women jammed on a boat for in close quarters for at least three weeks in the presence of the virus can generate about 100 cases of Wuhan virus and in a month it can create 600 cases and 6 hospitalizations and bowel-loosening panic in one Navy captain. This is orders of magnitude below the levels predicted by the various models which are based on ‘social distancing’ and all the other nonsense being implemented.

If this virus is only dangerous to people who were already at risk of an ICU stay or a cemetery plot if they caught basically ANY infection, then why are we hunkering down and locking ourselves in our safe-rooms? Simple. What we are experiencing right now has zero to do with our safety or the safety of anyone else and everything to do with the aggrandizement of power and money to governments.

Across the nation, state and local governments have used the Wuhan virus scare to take draconian measures to curtail civil liberties. Some states, like the fascist paradise of Gauleiter Gretchen, have forbidden the sale of garden seeds and child passenger safety seats as non-essential. She has forbidden Michiganders from traveling from one residence in the state to another residence. Over Easter, states and municipalities across the country directly banned religious services. Not merely services in a church, but services in a parking lot. Curfews have been imposed because, I guess, viruses are more active at night. California is filling in skate parks.

California is filling their skate parks with sand to make them unusable amid mandated lockdown.

Neighbors are encouraged to narc on one another.

Neighbours pinned this note on a sick, elderly woman’s front door after her daughter dropped off some groceries.

You can see how easily men like Stalin and Hitler achieved their aims. pic.twitter.com/WcyUinpDIy

How do you report places that aren’t enforcing social distancing? It’s simple: just snap a photo and text it to 311-692. #AskMyMayor pic.twitter.com/WQdCcVf1Rl

The Governor of New Jersey had the mourners at a Jewish funeral beset upon by police (stop me if you’ve heard something like this in a history class) and some were arrested. When questioned, he said he never considered the Bill of Rights in giving his order:

Tucker Carlson asks New Jersey Gov. Phil Murphy where he got the authority to nullify the Bill of rights when he banned religious services in his state:

"I wasn't thinking of the Bill of Rights when we did this… The science says people have to stay away from each other." pic.twitter.com/DPQ5d2DFl2

The police department in Raleigh, North Carolina, has taken upon itself to declare that protests are a ‘non-essential’ activity.

The criminalization of movement ends with ten Philly cops dragging a passenger off a bus for not wearing a face mask. It ends with local Brighton, Colo., cops handcuffing a father in front of his family for playing T-ball with his daughter in an empty park. It ends with three Massachusetts men being arrested, and facing the possibility of 90 days in jail, for crossing state lines and golfing — a sport built for social distancing — in Rhode Island.

None of these policies, none, not a single one, make you safer or prevent the spread of the virus. They are nothing more than government-ordained virtue signaling. It is not sufficient that you don’t become infected with Wuhan virus or that you observe a correct treatment protocol if you are infected, you must do it in the correct way and you can’t be allowed to enjoy anything while the mandated lockdown period goes on. To be effective, the policy must make you as miserable as possible. What all these policies have in common is that they are calculated to impress upon you that your ability to move, to shop, to travel, to work, to wear what you wish, to engage in legal activities, to congregate, to worship or just to f*** off a bit are all dependent upon some level of government deciding that no emergency exists.

Now that we’ve eliminated a good swath of the Bill of Rights with barely a whisper from the citizenry and with total cooperation of the media, ostensibly to protect us all from virus, do you really think government, having learned this lesson, is going to stop using this power any more than a tiger who has tasted human flesh is ever going to forego it again?

Right now we are in a perfect storm of fear and cowardice and stupidity. The modelers who drove this bullsh** frenzy desperately need to not be exposed as the buffoons they are. Politicians and the media who have fanned the flame need a body count to justify their abuse of power. Corrupt governors are trying to turn this crisis into a profit center to shore up budgets that are now dangerously out of kilter because they’ve destroyed the economies of their states. And we are all going along with it because we are either too scared to see this for what it is or we’re too cowardly to say enough is enough and f*** these people and their face masks and ‘social distancing.’