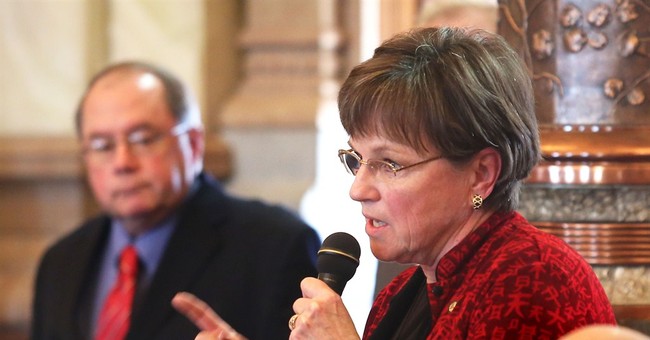 Last night, voting on strictly procedural grounds, the Democrat-dominated Kansas Supreme Court decided that the Kansas Legislative Coordinating Council had no authority to set aside an obviously unconstitutional order by fascist Democrat Governor Laura Kelly banning Easter services. Because of the facts in the case, they were able to avoid beclowning themselves and ruling that the order is constitutional and were able to skirt the issue by ruling that the process used to abrogate the ban was improper.

The KS Supreme Court has overruled the LCC’s decision to revoke @GovLauraKelly’s executive order to limit church gathering on Easter Sunday — the first ever Supreme Court hearing to be held via Zoom. #ksleg pic.twitter.com/aRs5JvNJI8

Kelly’s actions are just one in a series of orders across the country which specifically target religious services for suppression under the paper-thin guise of saving us all from a virus which up to 86% of the people who have been infected with it never even knew they had it. This is no accident, in the same jurisdictions that have banned religious gatherings, WalMarts, and liquor stores are still open (don’t get me wrong, I think they should be open).

We Have Sacrificed Our Constitutional Freedoms to Fight a Virus; Will We Ever Get Them Back?
Religious Freedom Seems to Have Been Singled out for Suppression by Wuhan Virus Regulations
Federal Judge Shocks Many When He Informs Louisville Mayor That the US Constitution Applies There

Yesterday, a federal judge in Kentucky bluntly informed the fascist Democrat mayor of Louisville that he did not have the authority to target church services. And the Department of Justice has promised that it will eventually bestir itself in the defense of one of the founding principles of the Republic

During this sacred week for many Americans, AG Barr is monitoring govt regulation of religious services. While social distancing policies are appropriate during this emergency, they must be applied evenhandedly & not single out religious orgs. Expect action from DOJ next week!

In the meantime, though, some bright lights have appeared through the haze of contrived Wuhan virus fearmongering. One of those was the On Fire Christian Center which, alone among Louisville churches had the guts to call bullsh** on a blatant and in-your-face unconstitutional order. Now, we have another. Pastor Aaron Harris of the Calvary Baptist Church in Junction City, Kansas has announced that regardless of what Kansas’s Gauleiter says, he will proceed with services

The Kansas Supreme Court’s decision does not validate the governor’s order. The legislative council may not have had legal authority to revoke it, but it is still unconstitutional. We’ll be having services tomorrow. I hope and pray that our local LE will respect the constitution.

Should Pastor Harris deliver on his promise, and I have no reason to think that he won’t, what will the Governor do? Send in the highway patrol or National Guard to break up the service? My gut feeling is that petty totalitarians can’t handle being challenged because once they are challenged and don’t respond, it is just minutes until everyone decides to laugh at them. And there is no shortage of assclowns on Twitter cheering on the Governor to suppress the service by force.

If religious liberty is to survive in the United States, if it is to have the pride of place as a unique exercise of personal conscience, then we need more of this. It is no accident that many governors and mayors are placing the ability to gather for religious services below the ability to buy a six-pack (in my own state, Maryland, the Archbishop of Baltimore has ordered all churches in the state locked in obeisance to the order of the nominally Republican governor, but I was able to buy wine at a liquor store yesterday because it was totally essential that I do so). The ability to suppress church services is not going to cease when the panic over this virus goes away. The precedent has been set for elected officials to close churches based on any bullsh** drama they wish to drum up. If you think pro-life churches in pro-abort states are not going to feel the heavy hand of governmental interference in the future, think again.