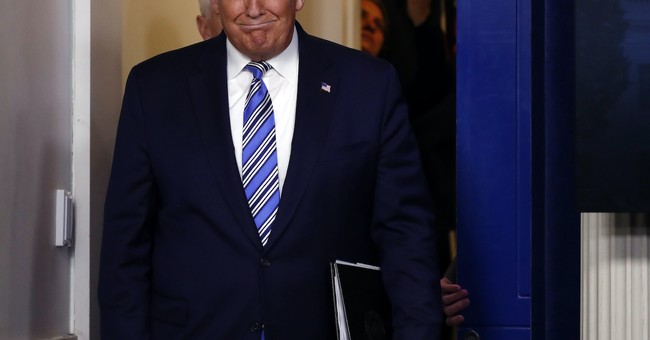 After an initial testy period, President Trump and New York Governor Andrew Cuomo seemed to have reached a modus vivendi on how to react to the Wuhan virus crisis. Considering that their fates were basically intertwined, this was a great move by both men. The situation is serious enough without the two men most at the front line of the fight bashing each other.

READ other RedState articles on Andrew Cuomo during the Wuhan virus crisis.
Tater Stelter Spins a Bizarre Story of Fredo’s Older Brother Actually Calling the Shots on Wuhan Virus Response
Fredo’s Big Brother Loses His Cool When Trump Tells Him to Man up and Do His Job
Andrew Cuomo Goes Full Commie and Demands Nationalization of Means of Production

That truce was violated yesterday during Cuomo’s daily press conference. The video is cued up to this exchange.

Zack: Governor, I noticed you didn’t mention President Trump by name today. You mentioned federal government, you mentioned Secretary Gazier are, I wonder if you could tell us [inaudible 00:12:02] they seem very dug in. Peter Navarro. Larry Kudlow are telling them not to do this. They say they’ve got their own supply chain stabilization board with the staff general [inaudible 00:12:18].

Andrew Cuomo: That’s not how you did it. President said, “It’s a war.” It is a war. Well then act like it’s a war and it’s not anti-business. Nobody’s talking about changing the governmental philosophy. By the way, the businesses would welcome it. I speak to the businesses. You know what they say, “I’ll do it, but I need startup capital. I can’t turn my factory overnight into a ventilator manufacturing company. I have to buy equipment. I have to find personnel. I have a lot of startup capital. Will you give me the startup capital? Will you give me an order that says if I go through all this, you will buy X number of units?” It’s actually a pro-business mentality, not an anti-business mentality. This is a false distinction.

Andrew Cuomo: Well, we don’t want to tell business what to do. That’s our philosophy. We don’t want to tell business what to do. You know what business wants? They want to make money. That’s what they want. They want to put people to work. They want to open their factory, they want to make money. Let them open their factory and make money. Help them do that by ordering the supplies you need. It’s a war. You’re right. Say, “Zack, you’re building battleships. Here’s your contract. God bless you.” That’s what the defense procurement act was all about. And at the rate they are going, it is not happening. FEMA says, “We’re sending 400 ventilators.” Really? What am I going to do with 400 ventilators when I need 30,000? You pick the 26,000 people who are going to die because you only sent 400 ventilators.

There is a lot of bullsh** being slung by Cuomo in this. Some of it is playing to a national office (message: I’m on top of things but the feds are screwing me). Some of it is simply because Cuomo is given to bouts of melodramatic excitement which frightens people because he acts like he’s about to lose his crap. The odds of New York needing 30,000 ventilators is pretty slim. In the current situation, no matter how much money you throw at the problem, it will be difficult for an manufacturer to either increase production or retool their existing production lines to churn out 30,000 FDA approved medical devices in a two week period.

President Trump noted the criticism and was ready and waiting when he convened a virtual town hall on FoxNews yesterday with his Wuhan virus team. The video is cued for your convenience.

Donald Trump: Well, I think they’re actually coming together. We had a bill that was done the other night and then all of a sudden somebody else injected herself in and all … we didn’t have anything that was even remotely signable. But now I hear just from a few minutes ago that they’re doing well and it’s for the workers, it’s for the people of the country and I hear they’re doing pretty well, so we’ll see how it comes out. I watched Governor Cuomo and he was very nice. We’re building him hospitals. We’re building him medical centers and he was complaining about … we’re doing probably more, definitely more than anybody else. And he was talking about the ventilators, but he should have ordered the ventilators and he had a choice, he had a chance because right here, I just got this out that he refused to order 15,000 ventilators. I’ll show this to Bill, but take a look at that, Bill. What does that say?

Donald Trump: This says that New York Governor Cuomo rejected buying recommended 16,000 ventilators in 2015 for the pandemic, for a pandemic, established death panels and lotteries instead. So he had a chance to buy in 2015, 16,000 ventilators at a very low price and he turned it down. I’m not blaming him or anything else, but he shouldn’t be talking about us. He’s supposed to be buying his own ventilators. We’re going to help. But if you think about, Governor Cuomo, we’re building him four hospitals, we’re building him four medical centers, we’re working very, very hard for the people of New York. We’re working along with him and then I watch him on the show complaining. And he had 16,000 ventilators that he could have had at a great price that he didn’t buy them.

At its most severe, coronavirus attacks the lungs, making it impossible to breathe without a ventilator. Landing in the hospital on a ventilator is bad. But worse is being told you can’t have one. After learning that the state’s stockpile of medical equipment had 16,000 fewer ventilators than New Yorkers would need in a severe pandemic, Gov. Andrew Cuomo came to a fork in the road in 2015. He could have chosen to buy more ventilators. Instead, he asked his health commissioner, Howard Zucker to assemble a task force and draft rules for rationing the ventilators they already had.

That task force came up with rules that will be imposed when ventilators run short. Patients assigned a red code will have the highest access, and other patients will be assigned green, yellow or blue (the worst) depending on a “triage officer’s” decision. In truth, a death officer. Let’s not sugarcoat it. It won’t be up to your own doctor.

Cuomo could have purchased the additional 16,000 needed ventilators for $36,000 apiece or a total of $576 million in 2015. It’s a lot of money but less than the $750 million he threw away on a boondoggle “Buffalo Billion” solar panel factory. When it comes to state budget priorities, spending half a percent of the budget on ventilators is a no brainer.

This from the New York Times:

Across New York, there were 7,241 ventilators in acute care settings, and another 1,750 stockpiled for use in an emergency, according to a 2015 state report. The report noted that the supply of ventilators would be inadequate for a pandemic on the scale of the 1918 flu outbreak.

The task force that issued the report devised a formula, relying partially on medical criteria, to help hospitals decide who would get ventilators and who would not. It also envisioned a lottery system in some instances. And age could play a role, with children being given preference over adults.

The guidelines were developed with input from experts in the fields of medicine, ethics, law, and policy as well as members of the public. Key points include:

“The guidelines were written to reflect the values of New Yorkers, and extensive efforts were made to obtain public input during their development,” said Susie Han, Deputy Director of the New York State Task Force on Life and the Law and project chair of the guidelines. “The guidelines are a living document, intended to be updated and revised in line with advances in clinical knowledge and societal norms.”

Not to put too fine a point on it, but when a Democrat was in the White House, Andrew Cuomo had a rather laissez faire attitude towards supplies of medical equipment and a decidedly die-and-go-to-hell opinion of people in need of said equipment.