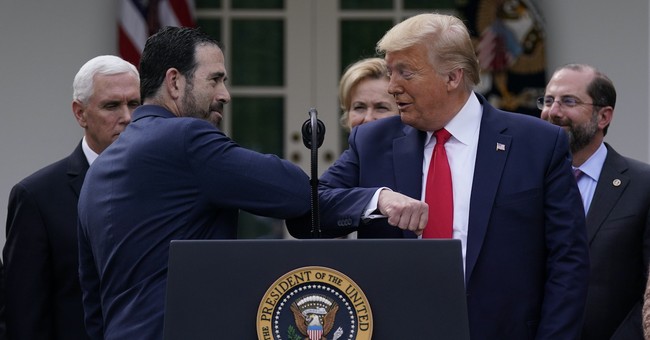 LHC Groupâ€™s Bruce Greenstein elbow bumps with President Donald Trump during a news conference about the coronavirus in the Rose Garden at the White House, Friday, March 13, 2020, in Washington. (AP Photo/Evan Vucci)

One of the unsurprising facts that has been shown time an again through the course of the Wuhan virus* is that is again reveals that a large number of reporters and Coastal elites do not have the vaguest idea about how their own government is organized and are equally clueless about how even out their country operates outside the Deep Blue bubbles of a handful of major metropolitan areas.

Here are a couple of prime examples of this pig-ignorance. They are by no means alone, because they are not, but they are exemplars of a whole body of elite opinion that seems to hold that no one is allowed to act unless and until someone tells them to do something.

I’m not the first person to make this observation but it truly is remarkable the degree to which local and state officials as well as private entities and businesses are making these massive public health policy decisions while the feds seem to be moving much more slowly.

While he presents himself as the nation’s commanding figure, Trump has become a bystander as school superintendents, sports commissioners and business owners shut down much of American life without clear guidance from the president. ⁦@maggieNYT⁩ https://t.co/3dmK62787s

Here are some basic principles.

The federal government is extremely slow moving. While you might think that something such as the Wuhan virus would cause it to move with a common purpose, nothing could be further from the truth. Ever decision is going to carry with it negotiations over turf and money and credit and avoidance of blame. The delays in the US developing a Wuhan virus test (personally, I think this is a red herring, until Thursday the lag between taking a sample and getting results was from 5 to 9 days; this is not a test, this is a historical record) can be traced largely to a bureaucracy that was unwilling to take extraordinary measures without a lot of pressure.

When the federal government is spurred into action, it actually has very limited facilities and personnel to do things. Tests and vaccines will be developed by Pharma. Existing private labs have to expand capacity to process tests. As my friend Mike Ford has said over and over, this is a logistics issue, not a medical one.

Conditions and resources and politics vary wildly from area to area in the US. It is ludicrous to think that a central focal point would be competent to set policies for Seattle, Washington, and Charleston, West Virginia.

Bureaucrats are not accountable to anyone, as far as I can tell, and in this situation the very last people we need calling the shots are people who don’t give a fat rat’s ass about what the citizenry thinks. They can provide information and recommendations but they don’t have executive authority. Trust me, this is a feature, not a bug.

There are thousands of jurisdictions in the country headed by elected officials. It is those people who have the responsibility and the authority to make policy. There is nothing wrong with Mike DeWine possibly shutting down Ohio schools for the rest of the year, Fredo’s older brother Mario calling out the National Guard to help control the spread of disease in New Rochelle, and other places doing nothing more than issuing public health warnings and advice. This is as it should be.

The genius of the American system is that our overall system of government is flexible, responsive, and resilient. Decisions are made at the lowest level consistent with the need (we Catholics, we call this principle ‘subsidiarity’). This in not a new observation on my part. A Frenchman named Alexis de Tocqueville noted the ability of Americans to organize themselves spontaneously to accomplish tasks (think barn raisings, harvesting, frontier communities protecting themselves from marauding Indians) without any directive from anyone. In some areas, people will lock the doors and avoid all contact with people. In other areas, we’ll get along with our lives. That is as it should be. Decisions being made at the lowest possible level without the need for a political or scientific priesthood to tell you what to do and when to do it.

I realize that these comments are not only ill-informed but made in bad faith. The media has made no secret out of trying to turn the Wuhan virus into a political disaster for President Trump and their coverage and fear-mongering demonstrates it. The clear purpose of these tweets is to forward the narrative of a president flailing about and a government made incompetent by the blindly political decision to ‘hollow out’ public health agencies and a reliance on Mike Pence’s prayer meetings rather than science.

The best summary of the state of affairs is this clip form Last of the Mohicans. It is the way Americans react to most anything.

Last of the Mohicans: “I don’t call myself subject to much at all” from [email protected] on Vimeo.

Not only are we not subject to directives from on high, we are free to ignore those directives when they don’t work or seem counterproductive or if we deem the cost-benefit ratio off kilter.

We are going to make it through this fine. Once the panic recedes and the overwhelming desire to “do something” fades away, things will get back to normal. This is not the Black Plague, it isn’t even the 1918 Flu, and we are not Italy and we are not China. Americans and the family and community level will deal with this according to the immediate facts on the ground. We fought a war to keep our betters from controlling our every move and there is no good reason to go back to that over this scare.

The sad part of this entire story, is that even when you put aside the political hit jobs being carried out by our media, it is obvious that a large number of them have no idea at all about what the country they live in is actually like. They don’t know the people, they don’t know our history, they don’t even know how the different levels of government function. And the are supposed to explain to us what is happening.

I think, starting next week @RedState contributors will be required to call it foreign Wuhan Chinese virus because #ChinaIsAsshoe