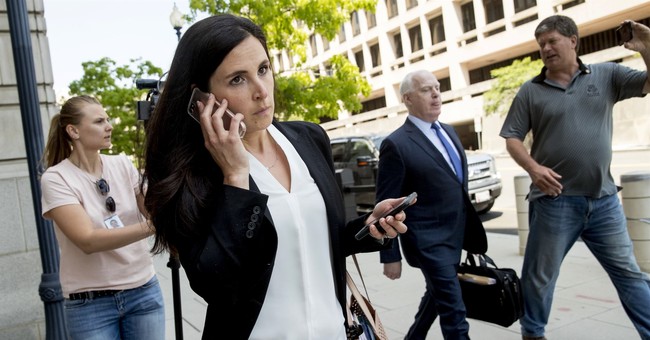 Attorneys Eric Dubelier, second from right, and Katherine Seikaly, second from left, representing Concord Management and Consulting LLC, walk out of federal court in Washington, Wednesday, May 9, 2018, after pleading not guilty on behalf of the company, which has been charged as part of a conspiracy to meddle in the 2016 US presidential election. (AP Photo/Andrew Harnik)

If there is a unifying feature in the entire Mueller investigation beyond it being an unsuccessful coup attempt against President Trump is that it was a Seinfeld-esque “investigation about nothing.” By the time Robert Mueller had pulled on his jackboots he already knew with near mathematical certainty that the key piece of evidence he was working from, the Steel dossier, had been the subject to nearly nine months of unsuccessful effort by the FBI and intelligence community to verify it. The report by Department of Justice Inspector General Michael Horowitz documents the extreme and dishonest lengths gone to by the FBI to keep the Steele dossier in play.

When the Special Counsel did file indictments (if you were ever an the laughably dishonest LawFareBlog or anywhere on the left you knew it because you’d see BOOM! or “It’s Mueller time” in their tweets”) they had zero relationship to the alleged subject of the investigation and involved process crimes, not substantive acts. But the most significant indictment by Mueller was that of Concord Management, a company owned by Putin crony Yevgeny Viktorovich Prigozhin, and thirteen individual Russians, who may or may not exist, affiliated with the so-called Internet Research Agency. I say may or may not exist because one of the commercial entities owned by Prigozhin did not even exist when the alleged crimes took place and people involved in covert activities often use fake identities…#tradecraft, right? I did an evaluation of the charges in my contemporaneous post If Mueller’s Indictment Isn’t a Nothingburger You Could Be Forgiven For Making That Mistake.

What started out a simple exercise in public relations–Mueller knew he was supposed to be investigating Russians and so he indicted some rando Russians and a company close to Putin to try to create the narrative that he was hot on the trail–quickly became a farce when instead of refusing to answer charged, Concord Management retained US counsel who quickly revealed what kind of buffoons were working for Mueller. (See all of my Concord Management vs. Team Mueller post at this link. Be sure to bring some dry undies.)

Now, with trial looming, the government has suddenly decided that it doesn’t want to proceed because Concord Management is cheating.

The Justice Department signaled Monday that it could back away from plans to put a Russian company on trial next month on a criminal charge that it bankrolled online and offline troll activity during the 2016 U.S. presidential race.
…
Assistant U.S. Attorney Adam Jed, who served on Mueller’s staff and is still assigned to the case, said Concord’s defiance of a court-approved subpoena raised doubts about its commitment to the U.S. trial.

“We’re starting to have some concern about whether Concord is really participating in this case,” Jed told U.S. District Court Judge Dabney Friedrich. “We envision a possible situation where it would not be either possible or prudent to adhere to the current trial schedule.”

Friedrich seemed startled by Jed’s suggestion of a postponement, although she indicated earlier in the half-hour-long hearing that she was frustrated with the company’s limited response to a subpoena seeking various documents about its corporate structure, calendars of key personnel and internet use.

The judge, an appointee of President Donald Trump, said she was highly suspect of Concord’s failure to provide any documents in response to a request for the internet addresses the company used over a four-year period. Prosecutors say the firm’s response was so lacking that the company should be held in contempt of court.

I don’t know about contempt of court but they are guilty as hell of contempt of prosecutors.

So now, with jury selection beginning and after two-years of public onanism calling attention to this indictment, the government has suddenly discovered that the people they are attempting to prosecute are laughing at them. It gets even more sad and pathetic. This is the equivalent of the toddler with a full pantload sitting and bawling while feces squirts out over the waistband of his Pampers.

Jed said the company was already in contempt of court for failing to send an authorized representative to Monday’s hearing as the judge demanded, but Dubelier said that was completely unreasonable for the Russia-based firm to do on a couple of days notice.

Jed proposed “a daily fine” against Concord to persuade the firm to comply. It was entirely unclear how the U.S. could collect such a fine, but the same observation could be made about the criminal fine which is the only punishment Concord could receive if ultimately convicted.

For all the smokescreen here, let me break it down for you.

The government is trying to con the judge into cancelling the trial on the specious grounds that they aren’t participating (wtf? really? how does that even work). Why? Because this klutz knows there is zero evidence to prove any of the charges in the indictment to a jury who, unlike a DC grand jury, may actually be awake and paying attention. If the judge cancels the trial, then they can claim ‘they wuz robbed’ and continue to push this ridiculous story. If a jury is empaneled, then it is a different ballgame. The prosecutor is not particularly anxious to be known as the guy who lost Mueller’s big case and, quite honestly, there are a lot of Deep Staters in Justice who also have a vested interest in propagating the Mueller hoax and definitely don’t want to see Concord Management acquitted in a trial. And, from what we’ve seen thus far, the evidence is scant and only vaguely circumstantial and the government, itself, has not been very forthcoming in producing information to which the defense is entitled.

What happens next? So far, the judge has been incredibly deferential to the government. This is a case where the judge, a Trump appointee, obviously is bending over backwards in order to acquiesce to every prosecution demand so she can’t be accused of giving Trump a break. Odds are she lets the government avoid the trial and the humiliation that will come with it.