Listen, My Children, and You Shall Hear... 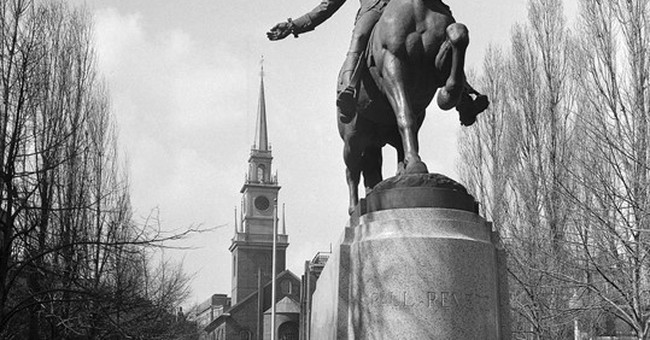 FILE – This March 23, 1948 file photo shows a statue of Paul Revere in front of Christ Church in Boston. It was in the church that the lanterns were hung, “one if by land, two if by sea,” that sent Revere on his famous ride, warning the countryside of the approaching British. The cornerstone of the church was laid in 1723, making it the oldest church in Boston, and it stands at the far end of Paul Revere Mall. (AP Photo/Abe Fox, File)

…Of the Midnight Ride of Paul Revere,
On the Eighteenth of April, in ’75:
Hardly a man is now alive
Who remembers that famous day and year.

Nevertheless, I do remember Henry Wadsworth Longfellow’s epic poem about Revere’s ride. Literally. In Fifth Grade, we had a unit on poetry which culminated in each student having to memorize and recite a poem to the class. I don’t recall the specific parameters — I assume there was a minimum length requirement. I was overly ambitious and undertook to memorize the entire poem. Which is rather lengthy.

I don’t recall the whole thing anymore — can only make it through the first three stanzas from memory at this point. But seeing as how today is the Eighteenth of April, I thought it fitting to give a nod to this integral Revolutionary figure (and event).

Maybe even particularly fitting, as our nation (and world) grapples with a war of a different sort. The “enemy” this time doesn’t announce its approach boldly with red coats and musket-balls — though it’s staged its invasion by land and by sea (and air, for that matter).

No, this enemy is stealthier. And, ironically, waging war against it is beginning to clash with the very freedoms our Revolutionary forebearers fought so valiantly to secure.

We’re treading a precarious path here. And the tension between safety and liberty is ratcheting up. What will the outcome be?

So through the night rode Paul Revere;
And so through the night went his cry of alarm
To every Middlesex village and farm,—
A cry of defiance, and not of fear,
A voice in the darkness, a knock at the door,
And a word that shall echo forevermore!
For, borne on the night-wind of the Past,
Through all our history, to the last,
In the hour of darkness and peril and need,
The people will waken and listen to hear
The hurrying hoof-beats of that steed,
And the midnight message of Paul Revere.