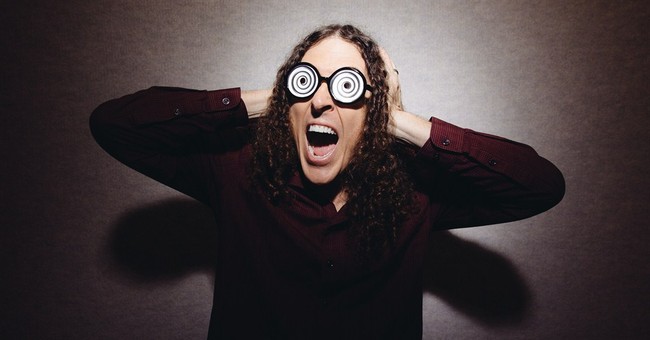 In this July 17, 2014 photo, “Weird Al” Yankovic poses for a portrait in Los Angeles. Billboard reported that Yankovic’s “Mandatory Fun” debuted at No. 1 this week with more than 80,000 units sold. That’s almost double the amount his last album, “Alpocalypse,” sold in its debut week in 2011. (Photo by Casey Curry/Invision/AP)

As Coronavirus and #TheGreatHunkerDown began to take hold in the U.S., I know I wasn’t the only one who momentarily had this thought: “Wonder if/when Weird Al will do a ‘My Corona’ parody?”

Thank you, Al. I think I speak for many when I admit I’m slightly relieved about that.

That said, Al hasn’t been idle while all this has been going on. In fact, he’s done his best to share helpful information:

Sadly, there’s a lot of misinformation going around these days, so I thought this might help clear a few things up. https://t.co/EeMZhlYETO

Yesterday, though, Weird Al gave us an extra special treat. He took to what appears to be his pool deck and serenaded the world with an accordion-ized version of a classic:

It took a bit for me to recognize it but eventually, I did. “Oh yeah, that’s…that one song.” It then occurred to me that, while the song was quite familiar to me — one I’d heard countless times growing up (thank you, K-SHE 95!) — I actually had no idea what its title was — or who the artist was.

Thankfully, it only took a brief perusal of Al’s Twitter timeline to discover:

Mason Williams – “Classical Gas”.  Yep – I would never have come up with that at a Trivia Night. But now I will — once we’re able to get back to semi-normal.

Right now, it’s not clear when that will be. Aspiring for an Easter ease to the hunkering is, perhaps, optimistic. But we could use a little optimism right about now. We’ve got plenty of realism (and a heaping dose of pessimism) being hurled at us of late. I’ll take every bright spot I can find.

Here in Missouri, the sun is peeking out a bit today (after several days of gloom and drizzle.) The temperature is in the mid-50’s. And Weird Al is treating us to a lively rendition of “Classical Gas.” It’s the little things.