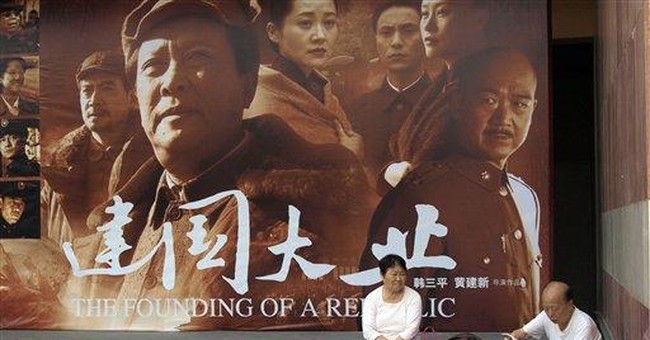 In this photo taken Sunday, Sept 27, 2009, an elderly couple sits near an advertisement for the Chinese propaganda movie “The Founding of a Republic” outside a cinema in Beijing, China. Chinese police are cracking down on illegal sales of several new propaganda films marking the nation’s 60th anniversary this week. (AP Photo/Ng Han Guan)

TownHall Political Editor Guy Benson posted an interesting graphic on Twitter today (taken from this Gallup poll), but it doesn’t speak well of public trust for media during the coronavirus crisis of the past few weeks.

Every single entity polled is above water on trust, by significant margins.

When one considers what the Economist — an outlet many consider venerable and trustworthy as a source of world news — has been pushing related to the pandemic, it’s not difficult to understand those numbers. Because they’ve been sharing state-sanctioned Chinese propaganda, something the U.S. State Department is in the middle of a campaign to denounce for the foreseeable future.

The Washington Free Beacon reports the Economist has been running propaganda from “an outlet that is violating U.S. law to spread the message that Chinese president Xi Jinping has done a masterful job handling the coronavirus pandemic.”

The propaganda advertorials, which are ads designed to look like news stories, come from the Beijing Review, an entity backed by the Chinese Communist Party. The outlet has never registered with the Department of Justice as required by the Foreign Agents Registration Act (FARA) and does not include a legally required disclaimer that the ad is being pushed by a foreign nation.

“President Xi [Jinping] leads the battle against COVID-19 outbreak toward victory,” an advertorial published in the March 21 edition of the Economist reads. “China has rolled out ‘probably the most ambitious, agile, and aggressive disease containment effort in history.'”

Advertorials, by the way, are exactly what they sound like: paid advertising that looks like an editorial. It’s nothing new in media, but they are often hard to distinguish from the real thing. The difference in what the Economist is peddling is that these advertorials, touting the brilliance of China in handling the plague they unleashed on the world, are from the the Beijing Review, and outlet that is not registered as an agent of the Chinese State and does not include the disclaimer that they are.

More disturbing still is the fact that other news outlets considered reputable in the U.S. have also been guilty of this propaganda pushing on behalf of the Chinese State. Most notably the Wall Street Journal.

The Wall Street Journal has also published more than a dozen Chinese propaganda articles about the coronavirus on its website since January. Many of the articles in the Journal downplay the pandemic’s impact on the Chinese economy while touting the regime’s successful response. Some of the advertorial headlines include: “China’s Virus Containment Wins Praise“; “Epidemic Impact to Be Limited“; “Apple CEO: China Getting Outbreak Under Control.” The Journal did not respond to a request for comment.

It’s a dark day in news media when once-giants in their field — who had remained giants as outlets around them folded to political bias — begin to bow to Chinese interests over the interests of the American people. But the good news, per Benson’s Twitter post above, is it looks like the American people are noticing.