AG Barr: Price Gouge Panicked Customers and You Could Be Prosecuted 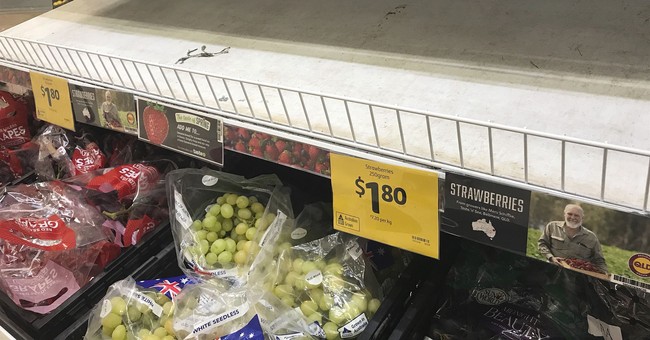 In this Sept. 14, 2018, photo, empty shelves, normally stocked with strawberry punnets, are seen at a Coles Supermarket in Brisbane. Public fears about sewing needles concealed inside strawberries on supermarket shelves have spread across Australia and New Zealand as growers turn to metal detectors and the Australian government launches an investigation to restore confidence in the popular fruit.(Dan Peled/AAP Image via AP)

There’s a lot of panic surrounding COVID-19 — aka the Wuhan Flu — infecting the airwaves and social media at the moment. Complaints about a lack of testing, vaccine development, self-quarantining, and whether those who are known to have contracted the virus should be publicly identified.

In response to some of the panic, Attorney General William Barr has declared his intent to prosecute any “bad actors” who might take advantage of the panic by price fixing or violating antitrust laws as the nation negotiates the unknowns surrounding Wuhan Flu.

“The Department of Justice stands ready to make sure that bad actors do not take advantage of emergency response efforts, healthcare providers, or the American people during this crucial time,” Barr said in a statement Monday. “I am committed to ensuring that the department’s resources are available to combat any wrongdoing and protect the public.”

The DOJ said it will “hold accountable anyone who violates the antitrust laws of the United States in connection with the manufacturing, distribution, or sale of public health products,” including face masks, respirators, sterile gloves, and diagnostic equipment. This is part of the Trump administration’s announced effort to ensure that all levels of government, the private healthcare, and the general public “are in the strongest possible position to respond to the outbreak” of the virus that causes COVID-19.

The Guardian reported last week that their consumer protection agency, the Competition and Markets Authority (CMA), would be “monitoring reports of price rises and other changes in sales practices during the outbreak and wanted to ‘ensure that traders do not exploit the current situation to take advantage of people’.”

Local officials stateside in places like New Jersey have also been warning retailers not to take advantage of “panic buying” during the outbreak.

The lobbying group Consumer Brands Association — which represents companies such as Coke and Clorox — asked the Department of Justice to intervene to dissuade price gouging at the height of the panic.

The Consumer Brands Association – which represents brands and companies including Colgate-Palmolive, Coca-Cola, General Mills and Clorox – wrote a letter to Attorney General William Barr on Monday urging him to take action on sellers taking advantage of the coronavirus outbreak.

The letter comes as Amazon, Walmart and other e-commerce companies have struggled to curb third-party sellers who are overcharging for products that have spiked in demand amid the spread of the coronavirus.

“If price gouging continues over the coming months, more and more Americans will become unwilling and/or unable to pay excessive prices for these products,” writes Bryan Zumwalt, executive vice president of public affairs for the Consumer Brands Association.

“This will decrease the likelihood that individuals will take recommended and necessary preventative actions.”

According to the Washington Examiner, Both China and Russia have been peddling misinformation about the flu which, as of Monday, had infected 600 people in the US and had been the cause of death of at least 22.