Schiff Confirms He's Conducting 'Real-Time Oversight' of Trump's Pandemic Response, but We Know What That Means 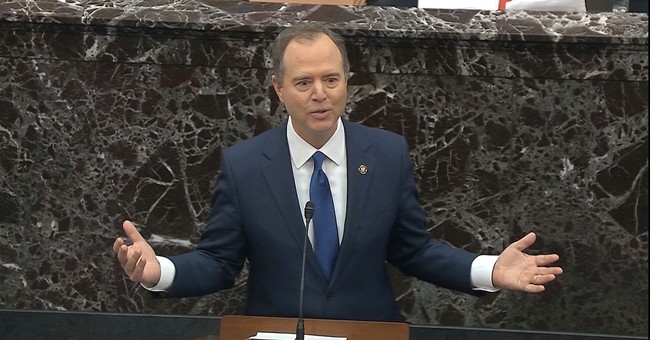 In this image from video, House impeachment manager Rep. Adam Schiff, D-Calif., answers a question during the impeachment trial against President Donald Trump in the Senate at the U.S. Capitol in Washington, Wednesday, Jan. 29, 2020. (Senate Television via AP)

A little over a week ago, House Speaker Nancy Pelosi (D-CA) announced a “bipartisan oversight panel” committee to oversee the Trump administration’s response to the Wuhan coronavirus “in the here and now.”

While Pelosi said the committee was not about investigating the administration and was more about making sure every dollar was spent well, House Intel Chairman Adam Schiff (D-CA) appeared on Joy Reid’s “AM Joy” program Sunday to confirm that his committee, too, is conducting their own “real-time oversight” of Trump and his response to the Wuhan coronavirus – and it sounds every bit like an investigation:

“We are right now going through our intelligence holdings. What did the intelligence community make us aware of at the end of last year or earlier this year? Other committees are doing like analyses,” Schiff (D-Calif.) told MSNBC’s “AM Joy” on Sunday.

While Schiff pledged that the 9/11-style commission he and his fellow California Democrats — including Sens. Dianne Feinstein and Kamala Harris — called for would be bipartisan, the former impeachment manager zeroed in on the Trump administration’s missed warning signs to address the virus.

“It is very important, I think, in reviewing the intelligence component to this to realize the intelligence piece is just one piece of the warnings coming to the administration. A lot of those warnings were in the public domain. They came from public health organizations, like WHO or CDC or his own National Security Council, and ignored those warnings.”

What this all means, of course, is that we will be subjected to yet another sham “investigation” conducted by Democrats similar to their failed “Trump/Russia collusion” investigation, and to their “Trump/Zelensky phone call” investigation, which resulted in Trump … remaining President.

As we launch into Round three (or is it four of five?) of Investigationpalooza, I’m reminded of when the House Intelligence Committee’s public impeachment inquiry hearings kicked off last November, when ranking member Devin Nunes (R-CA) delivered a blistering opening statement reminding the American people of Schiff’s pattern of duplicity in these investigations:

In the blink of an eye, we’re asked to simply:

-forget about Democrats on this committee falsely claiming they had “more than circumstantial evidence” of collusion between President Trump and the Russians;
-forget about them reading fabrications of Trump-Russia collusion from the Steele dossier into the congressional record;
-forget about them trying to obtain nude pictures of Trump from Russian pranksters who pretended to be Ukrainian officials;
-forget about them leaking a false story to CNN, while he was testifying to our committee, claiming Donald Trump Jr. had colluded with Wikileaks;
-and forget about countless other deceptions, large and small, that make them the last people on earth with the credibility to hurl more preposterous accusations at their political opponents.
[…]
And most egregiously, the staff of Democrats on this committee had direct discussions with the whistleblower before his or her complaint was submitted to the Inspector General, and Republicans cannot get a full account of these contacts because the Democrats broke their promise to have the whistleblower testify to this committee. Democrat members hid these contacts from Republicans and lied about them to the American people on national television.

The transcript said it all, but seeing it in living color just knocked it out of the park. The DC Examiner did a hilarious video mashup at the time of all the different ways Nunes scorched Schiff in his opening statement. Watch below:

As with the other investigations and inquiries, this one is not about oversight and holding Trump accountable. It is about undermining Trump’s presidency, this time during an election year and in the midst of a pandemic. Democrats are nothing if not painfully obvious about their intentions, and this is yet just another on a long list of examples of how they’ll play politics with literally anything because Orange Man Bad.