Progressives Get Prudish Over Kavanaugh 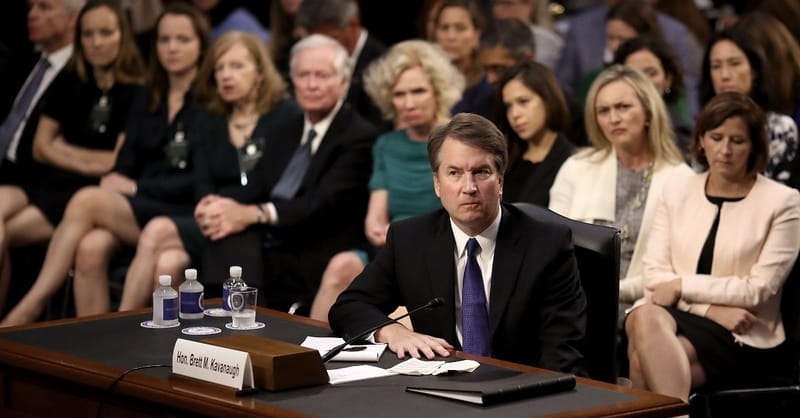 Democrats have recently resorted to smear tactics that make them look positively puritanical, and certainly not progressive. That they are employing their newfound prudery to campaign against Justice Kavanaugh in order to protect the pinnacle of the Sexual Revolution — the unrestricted right to abortion — is more than ironic.

The party of “stay out of my bedroom” now obsesses over a lewd antic that might have happened, over 30 years ago, at a crowded party in a college dorm room.

Never mind what 30 years later the Sexual Revolution has accomplished: Condom dispensers are standard equipment in college dormitories, as if living in co-ed spaces requires them to be readily available on every floor. Males who believe they’re female are allowed to use women’s bathrooms and locker rooms. Drag queens are invited into kid’s library rooms to read books, not about ABCs but LGBTQ’s, while holding small children in their laps or teaching them how to twerk.

The Left, after pushing the idea that sexual license is the ultimate freedom that the scolds of the Right are constantly trying to limit and that sexual preferences need to be protected with an amendment to the Civil Rights Act, is now mortified by [gasp] a 1980’s college party in a room with fully clothed, drinking students where maybe a penis might have been exposed as a joke and after some pushing and shoving may have touched a girl’s hand, in front of lots of people who were laughing — but no one in the room really seems to remember it at all, including the girl.

But since the suspect penis was alleged to have been Brett Kavanaugh’s, the story has, via cable television, entered all of our living rooms.

At The Hill the recent New York Times story was described as alleging “that a male classmate witnessed Kavanaugh press his genitals against a woman without her consent during college…[but that]…several friends of the woman told them she does not remember the incident.”

Wow. Is the Democrat-media complex just as prudishly offended about sexually-suggestive dancing at today’s parties and clubs with all the grinding and twerking and lots of body parts touching other bodies pressing together on the dance floor? Let’s hope they don’t take the time to listen to some X-rated rap lyrics that might be playing in the background or they just might pass out from the shock.

The alleged Kavanaugh incident was called “sexual assault” by journalists and commentators. Rep. Alyanna Pressley took the leap straight to “sexual predators,” who, she asserted in her statement regarding her impeachment resolution, “do not deserve a seat on the nation’s highest court and Brett Kavanaugh’s confirmation process set a dangerous precedent.”

In reality, the “dangerous precedent” being set is that the Democrats’ handling of the Kavanaugh allegations not only turns the rule of law on its head into “guilty until proven innocent,” but suggests that they automatically follow and define a person in later adulthood, translating as serious sexual predation even without a pattern or progression in later years being observed or claimed.

While the nation burns with important issues of security, economics, the budget etc. — the Democrats fiddle with this. How embarrassing that thousands of hours and dollars and media attention have been spent on incidents and accusations that are both so utterly juvenile. And how sad for Kavanaugh and his family.

It’s even sadder for any future nominee. Because that’s what this is really all about. Sure, there has been some blowback, corrections, retractions, and possibly we’ll hear of some firings and reshuffling among editors. But the point was made.

Future nominees, future candidates, future anybody who stands in the way of the Left — you have been warned. They’ll admonish you to keep your policies out of bedrooms, but don’t think they won’t try to peek into every room of your entire life. Maybe even a bedroom that somebody else says you were in but they can’t remember exactly in which house it was, and you might find yourself in front of Congress and on national television answering questions about it. You’ll be wishing all they wanted to see were your report cards and financial records, because at least that kind of stuff is mostly documented and defendable. But every party, every conversation, every friend, every comment…since you were a teenager? With the Democrat-media complex and their confirmation bias in control of the narrative, you won’t stand a chance.

They’ll even get someone you thought was on your team to assert that “if true” and the witness seemed “credible” that it could be part of a “troubling” pattern, even if they can’t find more accusers from more recent years. Multiple commentators will repeat the “credible” accusations. Networks will replay the loops 24/7.

Note, however, they won’t say whatever either you or Kavanaugh did was actually “criminal.” They’re not, as Sen. Gillebrand admitted, trying to “convict.” They’re just trying to assassinate your character. They’ll be careful whom they tell and how it gets out. And the media will gladly take the charge and weave it into the approved narrative. Sure, it may be a lie. But the damage will be done. Look for the retraction on page 74.

This is why Andrew Breitbart called this collusion the “Democrat-media complex.” And why Trump calls this complex the “enemy of the people.”

Because you can bet if the next Supreme Court nominee is Amy Coney Barrett or another religious conservative, the complex will immediately shed their puritan overcoats and assert that the nominee’s Christian faith and religious dogma lives much too loudly within them.

Read more of Cindy Simpson’s work at American Thinker. I you like what you read please let us know in the comments–streiff.