On Tuesday, the Department of Justice filed a motion to dismiss the criminal complaint filed against defendant Christopher Kelly on January 20, 2021. Kelly was charged in connection with the January 6 protests on Capitol Hill. 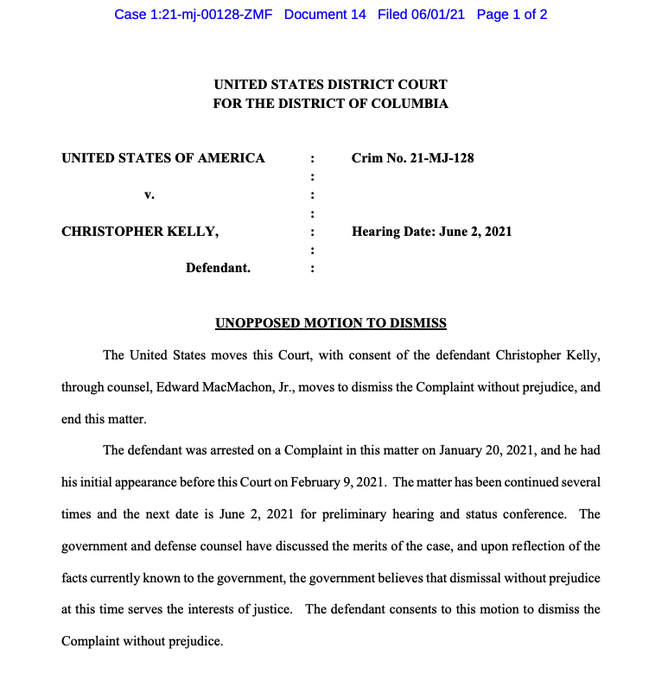 There are several issues worth commenting on here.

First, Kelly has never been indicted by a grand jury even though there have been grand jury indictments handed down as soon as the week following the protests.

Kelly was charged by way of a criminal complaint obtained by the FBI, relying on an affidavit filed by Special Agent Michael Andretta, and signed by U.S. Magistrate Judge Zia Faruqui on January 20. He was arrested and made his initial appearance on February 9.

Under Federal Rule of Criminal Procedure 5.1, a defendant must be indicted within 14 days of making an initial appearance following an arrest on a criminal complaint if the defendant is held in custody. The period is extended to 21 days if the defendant is released on bond. If an indictment is not obtained in that time, the defendant is entitled to a preliminary hearing where a Magistrate determines after the presentation of evidence by the government whether there is probable cause that the defendant has committed a federal crime.

This 14/21 day period can be extended, but only with the consent of the defendant.  It has been 110 days since Kelly made his initial appearance so the failure to seek an indictment has been a function of Kelly’s willingness to extend the time period under the rule while his attorney worked to convince the prosecution to not take his case to the grand jury. The tactic seems to have paid off.

The complaint charged Kelly with the same basic charges which DOJ employed against most of the January 6 protesters — obstruction of a congressional proceeding; unlawful entry into a restricted government building; and violent entry or disorderly conduct.

Last week, I wrote about some potential legal and factual problems that the DOJ is likely encountering with regard to each of these charges. The first charge may be undermined by the potential unconstitutionality of the “Electoral Count Act”, 3 U.S.C. 15, which is the statutory basis for the proceedings taking place in Congress on January 6. The ECA created a procedural mechanism by which Congress supposedly gave unto itself the authority to alter the outcome of the proceedings of the Electoral College as spelled out in the Twelfth Amendment to the Constitution. If the proceedings taking place on January 6 were unconstitutional, then at best they were “ceremonial” and protesters were not actually interfering with “government business or official function” as required by the criminal statute Kelly was charged with having violated.

As for entering a restricted building, that particular statute under which Kelly and others were charged applies only to the White House, VP’s residence, or other buildings where the President or other person protected by the Secret Service will be temporarily visiting. That means the statute would only apply to the Capitol during the limited time that Vice President Pence was present.

As was common in the criminal complaint affidavits, the Agent described the proceedings taking place at the Capitol on January 6, and the events of the crowd as a whole. Starting on page 6 — and continuing for 10 more pages — the FBI Agent described Kelly’s involvement. That seems to me like a lot to walk away from in “Emily Latella” fashion (see YouTube).

The affidavit uses as its foundation information from a “Confidential Source” about Facebook postings on an account in the name of “Chris Kelly.” The Agent matched a New York Driver’s License photo for “Christopher M. Kelly,” believed to be living in or around New York City, to a screenshot of the picture on the “Profile Page” of the Facebook account.

The affidavit then details some messages posted on the Facebook account to and from “Chris Kelly” discussing actions that individual was participating in on January 6. There are also pictures posted in the Facebook communications that appear to be of people inside the Capitol.

The Facebook account and the “Christopher Kelly” in the NY DMV database had a significant amount of matching information such as email address, telephone number, DOB, etc. Facebook messages from Kelly confirmed he was planning on traveling from New York to Washington on January 5, and returning to New York on January 7. Messages sent by him while in Washington made references to “taking this place by force” and that someone he was with had his teeth knocked out.

The affidavit goes on to detail several other communications on January 6 regarding the events at the Capitol and “Chris Kelly” is certainly present on the Capitol grounds.

The government’s motion to dismiss the complaint — and not seek an indictment — does not explain the basis for making the request. But the fact that the government has a photograph of Kelly outside the Capitol — meaning it could identify him in the vast amount of video footage it has of everyone inside the Capitol — suggests that Kelly’s Facebook messages might not accurately reflect what he actually did on January 6. If there was video of him inside the Capitol during the period protest activity was taking place, there is no reason why the government would not have moved to indict him soon after his February 9th arrest, just as it did to hundreds of other protesters similarly situated. The fact that it did not do so suggests there was some gap in the evidence needed to put him inside the Capitol building during the critical time period.

In addition, the affidavit mentions that Kelly might have traveled to Washington with his brother, identified in the affidavit as a retired NYPD officer. If Kelly wasn’t involved in any protest activity inside the Capitol, his brother would have been a likely witness on his behalf.

We may see more resolutions like this one as more defendants, with the assistance of capable defense attorneys, have the ability to examine and challenge the evidence which DOJ intends to use against them. There are fundamental First Amendment principles that allowed those at the Capitol to gather there on January 6 and protest the actions of the elected officials taking place inside. As the conduct of individuals — as opposed to the narrative descriptions of the actions of the crowd as a whole — become the focus of courtroom proceedings, the government may find more and more cases unable to survive the rights of defendants to “confront and cross-examine” the evidence against them.