The White Male Without a College Degree Non-Voter -- A Wave About to Wash Over Joe Biden?

I have referred to this story from Bloomberg News a couple of times previously, but it bears revisiting again on Election Day. It was not previously been behind Bloomberg’s paywall but seems to be now.  I wish everyone could read it.

I first found the story about this same time last year, and found it incredibly revealing in a way only political pros who are driven by data — and not narratives — would truly appreciate.

Four years ago Donald Trump took what was looked upon by most political professionals as a comedic effort to run for President, and won the White House by beating a Democrat Establishment politician — the wife of Democrat  President — who had been planning for 40 years her own inauguration as the first female President.

Pres. Trump was carried over the 270 electoral vote threshold with the following margins of victory in key states the press and pundits assured everyone he could not win:

The author of the Bloomberg piece, Francis Wilkinson, went in search of an explanation from Democrat party officials in Wisconsin for how it was Clinton could have lost the state after Obama had won twice by significant margins.  The conventional wisdom was the cause was attributable to underperformance with Black voters in Milwaukee that did not give Clinton the vote cushion needed to withstand the deficit that Democrat candidates often face in Wisconsin’s more rural counties.

But that narrative isn’t completely true.

In 2016, 15 Wisconsin counties in the southwest corner of the state, on or near the borders with Iowa and Minnesota, flipped from having voted for Obama twice, to voting for Trump.  The vote swing in some of these counties was 25% or better in their final numbers.

What Wilkison learned from her discussions with local party officials was that it wasn’t so much voters flipping from Obama to Trump that drove the huge reversal in the vote totals in those counties, it was first-time voters — voters who hadn’t cast a ballot in the four previous elections or were unregistered — who surprisingly showed up at the polls, took advantage of same-day registration in Wisconsin, and voted.  By far the biggest demographic reflected in these previous “non-voters” were white males with no college degree.  As one of the local Democrat party officials monitoring a precinct on election day described to Wilkinson, the men started arriving when the polls opened, and just never stopped.

They were mostly farmers and blue-collar workers with families.  They showed in large numbers and voted for Pres. Trump by a margin of 50% as a group.

Although not part of Wilkinson’s research, the fact that Clinton led Minnesota by approximately 10% in the polling they week before the election, but carried the state by only 1.5% is likely attributable to this same factor, as the Wisconsin counties on the border with Minnesota showed some of the largest swings in vote percentage from Obama to Trump. If the polling was even close to accurate she would have won the state by nearly 300,000 votes.  But she ended up winning by only 44,000 votes.

The sanguine takeaway from the 2016 outcome in Wisconsin — and likely from the surprising outcomes in Michigan and Pennsylvania — was that the Clinton campaign had taken those states for granted, not enough attention was paid to turning out key Democrat voting groups, and that failure will be corrected in 2020 which should put all three states back in the Democrat column.

But the Wilkison article provided a more dire view of the circumstances that produced the surprising Trump victories in those three states in 2016.  In it she noted that the largest demographic group of “non-voters” in the country is “white males without a college degree.”  The number is estimated to be nearly 20 million voting-age males who do not consistently vote in elections.  The rhetorical question posed to her by the Wisconsin Democrat party analysts was “What if the arrival of these voters in 2016 is only the leading edge of a wave of such voters entering the electorate for the first time in response to the political message pushed by Pres. Trump — populism and nationalism on behalf of  American working men and women, deregulation to free up more domestic economic activity, a more aggressive trade policy against hostile states like China, and greater control of our borders.

In 2016 the Trump campaign was built solely on the unapologetic rhetoric of the candidate in support of those themes.   But the 2020 Trump re-election campaign has tangible results from four years worth of policies on some of these topics which to run on.

The level of enthusiasm for Trump at his rallies — and some of the demographic analysis of his rally attendees showing sizeable numbers of registered Democrats and persons who have not previously voted — suggests strongly that the more dire view of the Wisconsin outcome is likely the more accurate view.

A solid performance today leading to the re-election of Pres. Trump will cement a post-Trump GOP party alignment.

At the same time, it will likely do exactly the opposite to the Democrat party as it will likely be riven with factionalism and recriminations by one constituency against another seeking to assign the blame. Right now there is little that binds those factions together other than their hatred of Donald Trump.

Today will likely show that is not enough to win an election. 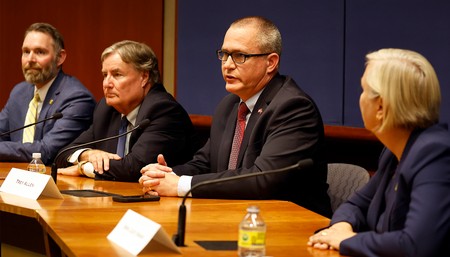