Earlier today I did this story on the many troubling and unanswered questions that have not come to the forefront with regard to the murder of Lee Keltner at a “Patriot Muster” rally in Denver on Saturday.  The killer is named Matthew Dolloff, a “security guard” hired by a local television station, 9News NBC, to provide security for their news crew covering the rally and counterprotest by BLM/Antifa.

As I indicated in my earlier story, here I’m going to cover the law of self-defense in Colorado, and then look at the facts to the extent we can discern them from the videos and still photographs that depict the events leading up to the shooting.

Before I get to that, I want to first write this — Lee Keltner was a veteran, having served in the United States Navy. He was the father of two sons, one of whom was with him on Saturday, and a grandfather.  He was attending a “rally,” not a protest.  He had attended similar rallies in the past — all of which were in support of Denver area law enforcement.  He was a supporter of “Back the Blue”.  He owned a small business he started in 1994, as a skilled artisan manufacturer of custom hats in various western styles.  His death is a senseless tragedy caused by someone who was doing NOTHING important or worthwhile.  I hope his family ends up as the majority owners of the television station who says they hired Dolloff.

The right of self-defense is codified in Colorado law at Colorado Revised Statutes, Criminal Code § 18-1-704 — “Use of physical force in defense of a person.”  It reads as follows:

(1) Except as provided in subsections (2) and (3) of this section, a person is justified in using physical force upon another person in order to defend himself or a third person from what he reasonably believes to be the use or imminent use of unlawful physical force by that other person, and he may use a degree of force which he reasonably believes to be necessary for that purpose.

(2) Deadly physical force may be used only if a person reasonably believes a lesser degree of force is inadequate and:

(a) The actor has reasonable ground to believe, and does believe, that he or another person is in imminent danger of being killed or of receiving great bodily injury;  or

(b) The other person is using or reasonably appears about to use physical force against an occupant of a dwelling or business establishment while committing or attempting to commit burglary as defined in sections 18-4-202 to 18-4-204 ;  or

(3) Notwithstanding the provisions of subsection (1) of this section, a person is not justified in using physical force if:

(a) With intent to cause bodily injury or death to another person, he provokes the use of unlawful physical force by that other person;  or

(b) He is the initial aggressor;  except that his use of physical force upon another person under the circumstances is justifiable if he withdraws from the encounter and effectively communicates to the other person his intent to do so, but the latter nevertheless continues or threatens the use of unlawful physical force;  or

(c) The physical force involved is the product of a combat by agreement not specifically authorized by law.

So, there are two hurdles that Dolloff must overcome if he wants to assert “self-defense” as a justification for shooting Lee Keltner:

First, that he must have reasonably believed a lesser degree of force was inadequate to deal with the threat posed by Keltner; and

Second, that he had reasonable ground to believe that he was in imminent danger of being killed or receiving great bodily injury.

In an odd quirk that I haven’t yet run down, the “Definition” section of the Colorado Criminal Code defines what is meant by “bodily injury” and “serious bodily injury”.  But there is no definition provided for “great bodily injury” which is the phrase used in the self-defense statute.

So far as we know, the canister of mace is the only weapon possessed by Mr. Keltner.  I do not believe the defense will be able to find an expert who will say that mace poses a risk of “serious bodily injury” as defined in Colorado law.

Let’s look now at what happened.  Below is a series of three photographs that have appeared across Twitter.  The notes to the right of each photo are not mine, they were put there by a Twitter user.  But I agree for the most part with the comments. 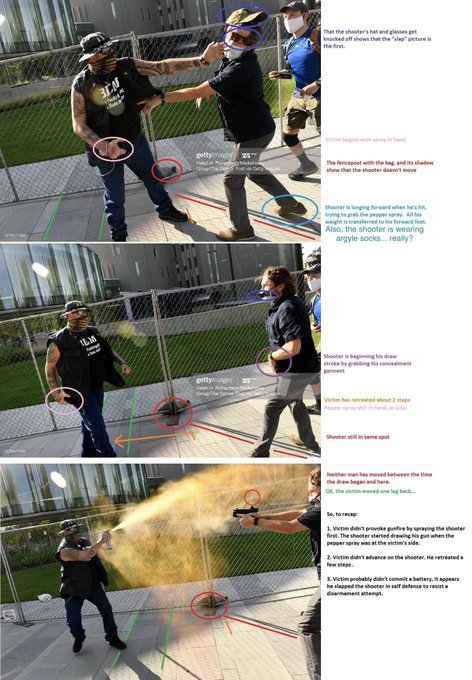 The middle photo shows that Mr. Keltner has taken a step backward and the mace canister is still at his side.  Dolloff on the other hand has lost his hat and sunglasses from the blow struck by Mr. Keltner, but has maintained his feet in the same position.  His left hand is reaching towards his waist — he appears to be wearing a “concealing” garment which minimizes the protrusion of a weapon on his right hip.  His right hand is hidden from view, but in the bottom photo you see him as he fires the fatal shot, and he’s a right-handed shooter so he was grabbing the firearm with his right hand.

That third photo shows that Mr. Keltner had taken ANOTHER step backward while Dolloff remained in the same position.  Between the open palm strike on Dolloff’s face, and the fatal shot, the distance between the men went from two feet to about 6-8 feet.

That is going to be a problem for Dolloff’s claim of self-defense, as will be the fact that he is drawing his firearm while Mr. Keltner still has his mace canister at his side.

At no point does Mr. Keltner threaten Dolloff with “deadly force”.

Here is something I discovered late — someone has taken all the still photos and placed them in sequence in a quasi-slow motion video sequence.  It has several photos before the open-handed slap, and then several photos between the slap and the fatal shot being fired.  You can clearly see Mr. Keltner retreating from the confrontation, and he only raises the canister after he sees Dolloff pull his firearm.

Here's every picture from Getty available in sequence. Nothing is cut out. If it's not there, it's not available. pic.twitter.com/li8MXgvQuK

But in this sequence, if you watch closely you will notice a “skip” of a fraction of a second of action — either the camera wasn’t taking pictures or the photographer didn’t release them all.  You do not see photos of Dolloff removing his weapon from his waist.  The photos skip from him beginning to reach right to him already having the gun extended with both hands.  It is at the :03-04 mark in the top video, and the :08-09 mark in the bottom video that there are photos missing, or the action wasn’t captured.

One thing we do see in this video is the possibility that Mr. Keltner’s attention was directed at the 9News producer — the person in the royal blue shirt — as it appears that Dolloff positioned himself between the two as Keltner approached.  It is possible this intervention by Dolloff is what led to Mr. Keltner striking him to ward him off.

But whether it’s the 9News producer or himself that Dolloff claims to be at risk, Mr. Keltner hasn’t done anything — nor could he be reasonably deemed to be a threat to do anything that would amount to a threat to do “great bodily harm” to anyone.

In looking at the sequence of events, and considering the actions of each in response to the other, I believe the facts are most accurately stated as Mr. Keltner slapped Dolloff when Dolloff attempted to ward him off as Mr. Keltner approached the 9News reporter who was taking a video.  Mr. Keltner then began to retreat as Dolloff reached into his waistband for his weapon — Dolloff drew the weapon in response to Keltner striking him, but the strike might have been “invited” by Dolloff stepping between the approaching Mr. Keltner and the 9News producer.  Mr. Keltner is retreating when he sees Dolloff draw his firearm — that, in my opinion, is the first threat of “serious bodily injury” by either side.

What we are missing is the photograph that shows whether Mr. Keltner raised his mace canister before Dolloff pulled his firearm, or he raised it after.

If Dolloff had his gun out before the mace canister was raised, then Dolloff provoked Mr. Keltner’s response, and Dolloff’s provocation was not justified by a threat of force from Mr. Keltner.

If Mr. Keltner raised his mace canister prior to Dolloff pulling his weapon, then it will be a closer call for Dolloff, but likely still not a justifiable use of deadly force because mace is not likely to cause “serious bodily injury.”

The missing photos would provide that answer.

But I’m 100% confident we will see more videos surface in the next couple of days.  Cell phone videos are ubiquitous at these protests.  From the one video above you can see 3 other people taking videos.

Further, it was reported earlier on Twitter that the Denver Police Department announced they have footage from a surveillance camera that captured the entire event.