There seems to be a positive theme building from some of the videos and stories of last night’s rioting in a Portland suburb near the Portland PD East Precinct Station.

As covered by my colleagues Bonchie and Nick Arama, residents of the neighborhood began to turn out last night to face down the punks that have invaded their peace and tranquility since the Portland PD and State Police drove them out of downtown Portland late last week.  Are we about to see some adult males begin to knock some of these kids on their arses?

Nick covered the story of a woman who had been attacked at her house, and her house vandalized after protesters thought she was wearing some Nazi symbol, having her neighbors come out to defend her when the punks came back a second time.

Bonchie covered the episode where an elderly woman was splashed with white paint and tormented by the Antifa scum when she tried to stand between them and the boarded-up front doors and windows of the Police Station.

But there was a third incident of protesters being challenged by an elderly woman who appears to reside in the neighborhood — she had the audacity to walk up to the trash can fire they started at the entrance to the Police Station and try to put it out.

A garbage can is set on fire next to the boarded-up front door of the station — presumably hoping that the wood covering the doors and windows would catch fire.

The woman, with the assistance of a walker, makes her way headed in the direction of the front door and fire that you can see ahead of her.

Another warning from police pic.twitter.com/4EkEJOeNzl

The woman has a fire extinguisher with her in the walker, and she begins to make an effort to extinguish the fire in the trash can, only to be blocked and prevented from doing so by some stupid punk kid playing like he’s a tough guy who can face down an elderly lady.  At one point he whacks her arm away as she tries to direct the extinguisher inside the trash can.  That should have been “game on” for anyone watching who supported what the lady was trying to do.  As you can see, only other pathetic moron puke punks were watching.  Somebody put down the flippin’ cell phone and step in — you’re not “press” just because you can find the red “record” button on the camera app of your phone.

Here’s a picture of a big guy who came to help.

Help the kid battle the elderly woman.  That guy is in need of a …. corrective response. 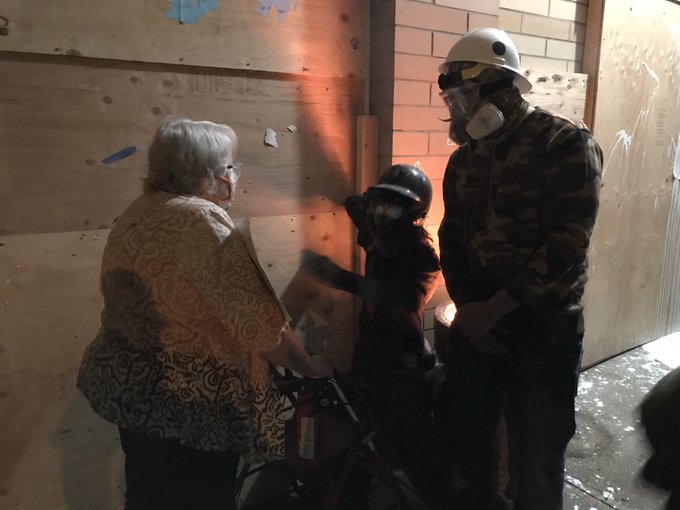 Every parent who has a child out there wreaking havoc in these neighborhoods, creating circumstances where elderly women feel compelled to leave their houses to intercede, should be ashamed of their kids and themselves for allowing this to happen and not stepping in.  This has gone beyond protesting any social cause.  This is rioting for amusement.  This is simply pushing boundaries to see how much they can get away with.  This is just a running battle with the police on suburban Portland streets because its more entertaining than the other alternatives available to them.

These kids are disrespectful punks who know nothing about the residents of this neighborhood and the lives they have led.  These are incredible expressions of bravery by the women to do what they did — to face down this “mob” of idiots.

At some point, the “sons and daughters” of ladies like these are going to show up and blood is going to be spilled.  The police are hamstrung by the cowardice and duplicity of the politicians who dictate to them what they can do.

A “citizen patrol” is not hamstrung in that fashion.  Either the political establishment of Portland is going to allow law enforcement to do its job, or the vast majority of Portland who despises what is being done to their city will take care of that problem.