Are New Mexico Citizens In Jail Today for Acting Lawfully? Seems That Way

As detailed in this story by my colleague Streiff here at Red State, a shooting happened yesterday in Albuquerque, New Mexico, during an effort by a left-wing street mob to topple the “La Jornada” statue in front of the Albuquerque Museum honoring Juan de Ornate, a Spanish Conquistador who led an expedition from Mexico up the lower Colorado River basin, through what is now New Mexico, and beyond.

At some point during protests one or more protesters took a pick-ax to the La Jornada statue.  In the immediate aftermath, a man dressed in white shorts and a blue shirt was attacked by a protester carrying a skateboard.  As described by Streiff in his story, the man in the blue shirt made an effort to evade a crowd descending upon him, and at one point he pulled out pepper spray in order to ward them off.   But that did not work, as you can hear people in the crowd pursuing him yelling “Lets kill him” and similar such threats.  The man in the blue shirt then pulls out a handgun, and fires several shots in the direction of those attacking him.

But let’s now take a look at the “morning after” reporting we are getting from various news outlets — most of them seeming to follow the lead of the Albuquerque Journal who had a reporter on the scene.

The top line of the headlines is now all about the “New Mexico Civil Guard”, and the fact that Albuquerque PD arrested several members of the group at the location of the protest.  Today the most notable elected officials in New Mexico are condemning the presence of the group, and blaming the violence on them — with not very subtle implications that they were involved in the episode that led to the shooting.  So, let’s identify the players and relevant details about them:

Albuquerque Mayor — Tim Keller, Democrat elected in 2017.  As part of his campaign he pledged to increase size of Albuquerque PD from 850 to 1200 officers — oops.

Now let’s turn to this morning’s story in the Albuquerque Journal.  Here are a few select passages:

“Although we are still learning more about the situation, I am horrified and disgusted beyond words by the reports of violence at a protest Monday night in Albuquerque,” [Gov.] Lujan Grisham said late Monday in a statement. “The heavily armed individuals who flaunted themselves at the protest, calling themselves a ‘civil guard,’ were there for one reason: To menace protesters, to present an unsanctioned show of unregulated force. To menace the people of New Mexico with weaponry — with an implicit threat of violence — is on its face unacceptable; that violence did indeed occur is unspeakable.”

“The shooting tonight was a tragic, outrageous and unacceptable act of violence and it has no place in our city,” the mayor [Keller] wrote in a statement. “Our diverse community will not be deterred by acts meant to divide or silence us. Our hearts go out the victim, his family and witnesses whose lives were needlessly threatened tonight.”

Police Chief Michael Geier said in a statement that APD is “receiving reports about vigilante groups possibly instigating this violence.”  “If this is true, (we) will be holding them accountable to the fullest extent of the law, including federal hate group designation and prosecution,” he added.

It’s pretty clear that the elected officials want the narrative to be that the “civil guard” are to blame for having instigated the violence, and the shooting was a result of their presence.  The Police Chief, however, can’t confirm whether they had anything to do with it or not.  But the factual reporting detailed in the story reveals the Mayor and Governor’s words for the lies and deceit that they were.

The night began with peaceful protest and prayer but tensions began to escalate when protesters took a pick-ax to the statue and members of the heavily armed New Mexico Civil Guard, a civilian group, tried to protect the monument.

Hours earlier the protest had begun with a prayer and peaceful demonstration to remove the statue of “La Jornada” in front of the museum. About 300 gathered in Tiguex Park around 6 p.m., where indigenous activists and small-business owners gave speeches.  Following the speeches, demonstrators walked across the street to the sculpture in front of the museum, which was being protected by the New Mexico Civil Guard. That’s when things started to get more heated. As people climbed on the statue and covered Oñate’s head with a green cloth, they led the group in chants and called for action to remove the statue. The civilian militia group stood by and watched, and it wasn’t until someone brought out a pickaxe that they intervened and tried to take it away.

The “civilian militia group” stood by and watched, but then tried to prevent a protestor from taking a pick-ax to a valuable piece of property belonging to the community?  How dare they!!!!

About 10 minutes later as the altercation escalated, the man in the blue shirt fell down and then was chased off. Gunfire erupted.

So how is it again Gov. Lujan Grisham and Mayor Keller that the “civil guard” were responsible for the violence?  Where is it reported anywhere that the man in the blue shirt who was attacked, and then fired his handgun in defense of himself, had anything to do with the “civil guard” folks??

In an email sent to press outlets later, APD Spokesman Gilbert Gallegos commented on arrests made:

“The individuals were disarmed and taken into custody for questioning.” Officers could be seen taking five or six men dressed in military fatigues into custody.

So the armed men in fatigues were “taken into custody for questioning.”  I might like to be their lawyer today.  So who were they?  White nationalists?  Anti-government militia who operate along the US-Mexico border?  Second Amendment extremists?

Turns out, based on a story done by a local television station two weeks ago, they are a group of individuals, some retired military and/or law enforcement, who have a Facebook page, and organized themselves just a couple weeks ago after seeing looting and rioting sweep across various U.S. cities.

That particular story is about a group called the “New Mexico Civil Guard of Curry County”.  Curry County is on the New Mexico-Texas border, and it does not include Albuquerque, which is about 200 miles away.  So it’s not clear at this moment if the two groups are one-in-the-same, affiliated with each other, or just happen to coincidentally share the same name.  But without resolving that question, let’s consider what the news story on the Curry County group says about them.

They call themselves the New Mexico Civil Guard for Curry County.  Their mission: Defend citizens and their private property.  “We will not allow businesses in our community to be put through the pain we’ve seen nationwide,” their Facebook page reads.  “The protests are necessary, we fully understand that, and to an extent the violence is necessary, but we will not allow that violence to be directed at our citizens and their property.”

Well, isn’t that “radical.”   After watching cities be burned and private property looted — often with the big city police departments standing by and watching because of orders from local and state government officials — these private citizens of New Mexico say “Not happening here.”  They recognized the legitimacy of the protests — just not the actions of rioters and looters.

“We’re not against the protesters or whatever you want to call them,” said Petty, who is the group’s captain. “We’re not there to intimidate the protesters or anything like that. We’re not with antifa. We’re there because of everything that’s going on (around the country) and we’re not going to watch our community be destroyed, if it comes to that.”

Bryce Provance, one of the New Mexico Civil Guard leaders who lives in Albuquerque, said many members across the state are retired military and/or law enforcement personnel who are highly trained “in CPR and being prepared, tanning food, and arms training as well.” …. “We are not Antifa … They are actively targeting our members because we don’t agree with the violence and thuggish tactics they are using,” Provance said. “We’re not for any organization that uses violence to silence anybody with dissenting opinions.”

Here is a photograph of the Curry County group that accompanied the news story on them. 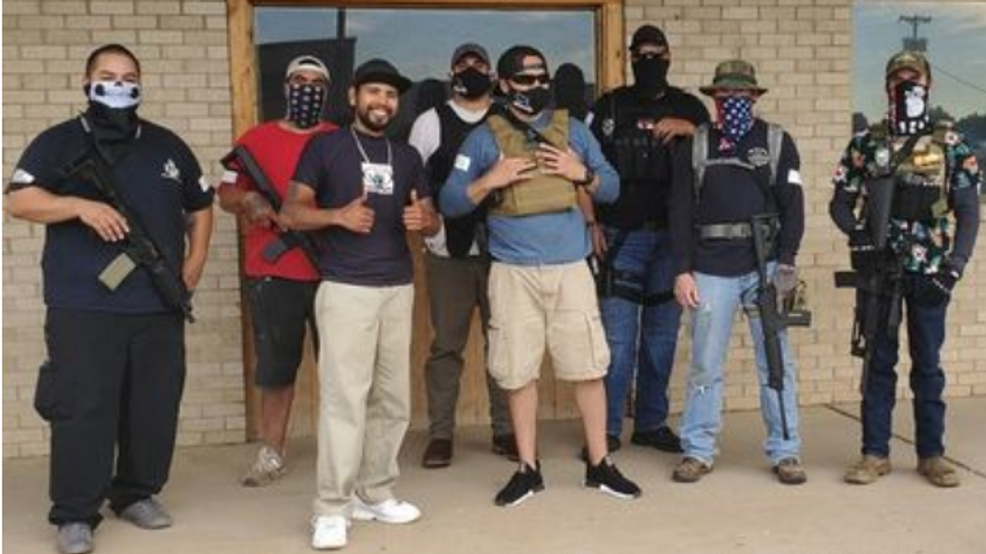 I don’t see any obvious indications of a “white nationalist” group — if anything, they look to have more Hispanic members in that photo than Caucasians.  I don’t see any Confederate Battle Flags or Swastikas.  Are the armed?  Sure.

What does the State of New Mexico say about that?  Let’s check the New Mexico State Constitution:

No law shall abridge the right of the citizen to keep and bear arms for security and defense, for lawful hunting and recreational use and for other lawful purposes, but nothing herein shall be held to permit the carrying of concealed weapons. No municipality or county shall regulate, in any way, an incident of the right to keep and bear arms.

New Mexico is an “open carry” state.  Permits are required for firearm possession only with regard to “concealed carry.”  But even in that regard New Mexico is “must issue” state — local authorities have no discretion to not issue permits to citizens who apply.  It seems that if the man in the blue shirt possessed the required permit necessary to be carrying a concealed handgun, he likely didn’t violate any state law as his actions were clearly in “self-defense” after being violently assaulted.

There are no prohibitions on carrying of long-guns such as those shown in the photograph above.  New Mexico has no laws restricting weapon types or magazine capacity.

We know what the Mayor and Governor would like you to believe — but it looks like they are lying.