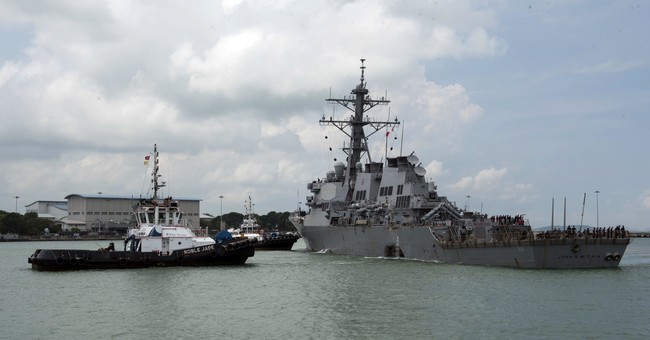 Divers from the Navy and Marine Corps have finally recovered the bodies of all ten of the missing sailors from the USS John S. McCain, the US Navy confirmed on Monday.

The sailors had been missing since the August 21 crash with a merchant ship near Singapore. The hull of the McCain was ripped open, flooding machinery and communications rooms, as well as crew berths.

According to USA Today, there is an ongoing operational pause for Navy fleets worldwide and the Pacific Fleet is undergoing a ship-by-ship review.

In the aftermath and outrage over the increase of collisions involving Navy vessels, three-star admiral, Vice Adm. Joseph Aucoin, was fired “due to a loss of confidence in his ability to command.”

An investigation into the collision revealed,

The McCain suffered a steering failure as the warship was beginning its approach into the Strait of Malacca, before colliding with the tanker, a Navy official told CNN.

The official said it was unclear why the crew couldn’t use the ship’s backup steering systems to maintain control.

Carl Schuster, a Hawaii Pacific University professor and former director of operations at the US Pacific Command’s Joint Intelligence Center, said that he thought it was unlikely that the ship would have been hacked.

“Navigating a ship in a shipping channel is a manual operation. It comes down to watch attention and awareness. It’s a training procedure issue and a watch qualification issue,” he said.

“The signs were that the merchant ship was in compliance and the damage on the USS John S. McCain suggests that it wasn’t in compliance” of traffic rules at the time, he said.

Hopefully, this disturbing trend of increased collisions will end now.