Dystopian Drones Are Here to Make Sure You're 'Social Distancing,' but That's Not Even the Most Troubling Part 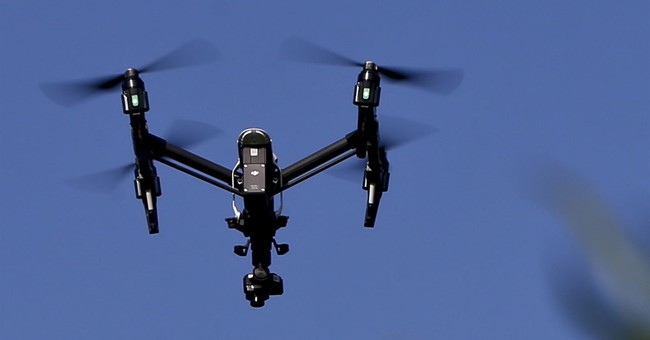 FILE – In this July 11, 2018 file photo, s drone equipped with a thermal camera flies over the plants at the Pennsylvania Department of Natural Resources’ Jennings Environmental Education Center on Wednesday, July 11, 2018 in Slippery Rock, Pa. An aviation bill Congress is rushing to approve contains a little-noticed section that would give authorities the power to track, intercept and destroy drones they consider a security threat, without needing a judge’s approval. Supporters say law enforcement needs this power to protect Americans from terrorists who are learning how to use drones as deadly weapons. (AP Photo/Keith Srakocic, File)

I remember one of the images that struck me so forcefully about how China was approaching the Wuhan virus pandemic there. That was before it really hit here.

It was this image of the drone spying on the people in the village yelling at the granny to go back to her house and put on her mask.

Now, we could say that none of these people were actually around anyone else when the drone hunted them down, so they weren’t endangering anyone. But meanwhile, a truly potent reminder that you aren’t safe anywhere from the dystopian surveillance state if you aren’t complying with their commands.

Hence the reason it was so disturbing to see the tweet about this story of drones now being deployed in at least twenty-two states in the U.S. to surveil people to ‘check on compliance with social distancing.’

"The drones, donated by DJI, a Chinese company, have gone to 43 agencies in 22 states, all to help enforce social distancing rules."

Oh, and DJI "may be sending data to China" pic.twitter.com/LqH6VzonzH

“The drones, donated by DJI, a Chinese company, have gone to 43 agencies in 22 states, all to help enforce social distancing rules.”

Have none of the people who accepted these drones a brain in their head?

Harrington, the GOP spokesperson, points out the concern in the past, citing a 2017 article, with the allegation that data might be sent back to China.

We think DJI is “providing US critical infrastructure and law enforcement data to the Chinese government.”

And now local law enforcement is using them in response to the Chinese virushttps://t.co/UnZC3oXNdv

In China, DJI is described as a "leading Chinese pioneer in the world of consumer drones that adheres to the guidelines of Xi Jinping's new era of socialism w/Chinese characteristics."https://t.co/guc3bXQVJkhttps://t.co/uut4lWU48C

But the company denied at that time that any information was collected by the company or sent back to China.

Anyone with Homeland Security want to weigh in on this type of surveillance? How about AG Bill Barr, the constitutionalist, does he find this troubling? We note that these are being employed by local governments or police. Not only the dystopian nature of it but the dangers it poses?

All this for our own good, of course.