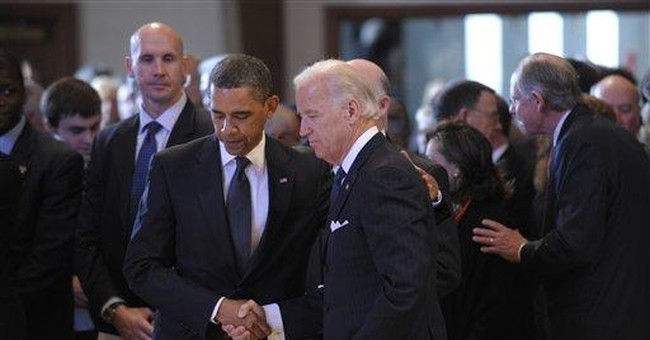 One of the glaring things that people have noticed about the campaign of Joe Biden is that it was missing his former boss, Barack Obama.

Even after everyone else had endorsed Biden, even his opponent Bernie Sanders, as my colleague Joe Cunningham predicted in March.

Now, finally, Obama is weighing in with his endorsement for Biden with a video from his home. I don’t know about you, but it seems decidedly lackluster and formulaic. Really says something that it’s taken this long.

#BREAKING: Fmr. President Obama endorses Joe Biden: "I'm so proud to endorse Joe Biden for President of the United States. Choosing Joe to be my VP was one of the best decisions I ever made." https://t.co/ZCCEqV2uDp pic.twitter.com/S1wx9qGN1J

“If there’s one thing we’ve learned as a country from moments of great crisis, it’s that the spirit of looking out for one another can’t be restricted to our homes or our work places or our neighborhoods or houses of worship, it also has to be reflected in our national government,” Obama said.

“The kind of leadership that’s guided by knowledge and experience, honesty and humility, empathy and grace. That kind of leadership doesn’t just belong in our state capitols and legislatures, it belongs in the White House, and that’s why I’m so proud to endorse Joe Biden for president of the United States.”

Sounds like yada yada yada, yawn. If you’re actually proud to endorse your “best friend,” you don’t wait until the literal last moment, after everyone else.

This comes even after sexual assault allegations with a criminal complaint filed against Biden at the end of last week.

President Donald Trump suggested Obama was delaying his endorsement because he knew things.

According to reports, Obama had tried to talk Biden out of running.

Obama Reportedly Tried to Talk Biden Out of 2020 Run: ‘You Don’t Have to Do This, Joe’ https://t.co/p0nmmAtc1n

"Obama warned Biden's aides to make sure Biden didn't embarrass himself or damage his legacy."

"If every nation on earth was run by women, you would see a significant improvement." – Obama

But basically GOP spox Elizabeth Harrington nails it, he’s the only one they have left, they don’t have anyone else.

That’s pretty darn sad for them that someone who has trouble even completing a sentence is viewed as their only chance.

After all other options eliminated, Obama to finally endorse his own former vice president. https://t.co/woISsAPf0x