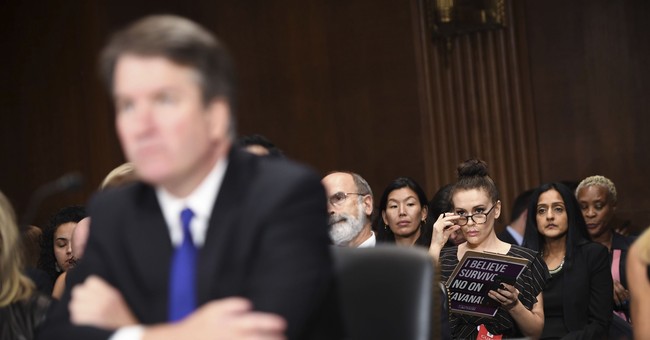 FILE – In this Sept. 27, 2018 file photo, actress and activist Alyssa Milano listens as Supreme Court nominee Brett Kavanaugh testifies before the Senate Judiciary Committee on Capitol Hill in Washington. Now that the #MeToo movement has passed the one-year mark, key voices in the movement are assessing progress and looking forward to the next phase. For actress Milano, it’s about winning the cultural battle, despite a perceived setback with the confirmation of Brett Kavanaugh confirmation to the Supreme Court. (Saul Loeb/Pool Photo via AP, file)

If you needed a little bit of a laugh this Easter weekend, this MRC video with Alyssa Milano might do it for you.

You may recall Milano during the Kavanaugh hearings. She was such a crusader against Justice Brett Kavanaugh saying that we should “believe women,” she even went to the hearings, to make her presence known, sitting in the back with a look on her face and a t-shirt saying, “I believe survivors.”

She appeared with CNN’s Chris Cuomo, talking about Kavanaugh and saying he wasn’t entitled to the benefit of the doubt.

So MRC juxtaposed that interview with a recent interview that she did talking about Joe Biden and the difference is stark, as she twists in the wind, trying to desperately justify herself.

ICYMI: @Alyssa_Milano had to perform some mental gymnastics to defend Joe Biden after Biden was accused of sexual assault, despite her previous vocal belief to always "believe women." pic.twitter.com/swUQJSTb7z

Suddenly, Joe Biden is entitled to the “due process” she never felt Kavanaugh deserved. She doesn’t feel comfortable “throwing away a decent man that she’s known for 15 years” despite the fact that she was perfectly willing to throw away “decent man” Brett Kavanaugh who didn’t have a blemish on his record until Christine Blasey Ford. Meanwhile, Joe Biden has a history of inappropriate touching of multiple women that caused them to be uncomfortable. There’s far more evidence of “issues” with Biden than there ever was with Kavanaugh. She thinks Biden shouldn’t be thrown away without a thorough investigation that she’s “sure” that media would be all over if we weren’t in the middle of a pandemic? Really? I’m here. I’m writing about it. I’ve written about it here. Where is the mainstream media?

I’m sure that they’ll cover it once the pandemic is fully over, maybe in a year, after the election.

But their lack of coverage and Milano suddenly discovering the concept of due process isn’t about politics at all, right?