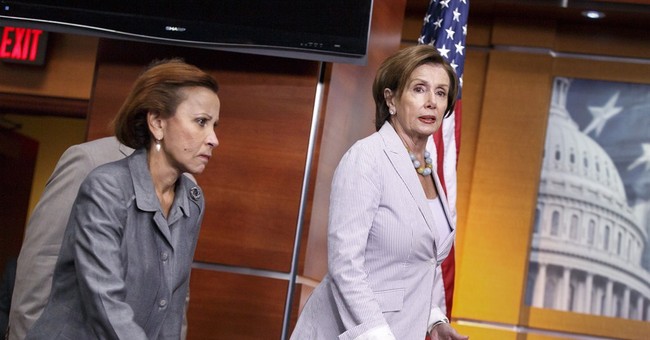 House Minority Leader Nancy Pelosi of Calif., right, and Rep. Nydia Velazquez, D-N.Y. arrive for a news conference on Capitol Hill in Washington, Friday, Aug. 1, 2014, by the Congressional Hispanic Caucus, as the House tries to deal with legislation on the border crisis, a day after Congress was supposed to go into its August recess. (AP Photo/J. Scott Applewhite)

House Speaker Nancy Pelosi (D-CA) held up the virus stimulus relief bill for a week with ridiculous demand for pork and Democratic pet programs including things like voting by mail.

Imagine the chaos and the voter fraud that would result.

But despite being for that, she’s been refusing to allow members of Congress to remote vote.

“There are serious constitutional, technological and security concerns about it,” she said in an interview with MSNBC. “They can be addressed, but for right now, we’re just working very hard to get unanimous consent so we can get this bill done, and then consider what the options are later.”

In an interview with CNN moments later she was even more terse, saying it may be an option in the future, but at the moment “we’re not prepared for [it].”

Meanwhile at least five members of Congress are now believed to have gotten the virus. The latest is Rep. Nydia Velazquez who is isolating at home. She has not been tested but is believed to have it based upon her symptoms.

I have been diagnosed with presumed coronavirus infection. My symptoms are mild. I am isolating myself at my home and following the guidance of the Office of Attending Physician.

My full statement is below. pic.twitter.com/9TgPXoy9dN

Not a lot of social distancing going on in this picture, Velaquez is standing behind 80 year old Pelosi on Friday when they voted on the stimulus bill.

Rep Nydia Velazquez D-NY was on the House floor, in her Capitol Hill office, and at a ceremony with Speaker Pelosi & House GOP Leader McCarthy on Friday. Now Velazquez thinks she may have the Coronavirus. https://t.co/9HuyXKItsw pic.twitter.com/uxNfqT2bOn

So here’s the thing. Maybe I’m just dumb, but what’s so hard about doing remote voting at this time? Have the people counting the votes verify the identity of the member of Congress, do a Face Time/Skype vote. What’s so challenging here? She has no problem with mail-in votes where you can’t really verify anything, but wouldn’t trust being able to identify her own colleagues?

At least practice social distancing that you’re supposed to be preaching which surely wasn’t happening in that picture after the vote or have staggered voting so not everyone is all crowded there at the same time. But that still requires traveling to get there.

How long has this problem of the virus been going on? She accused Trump of denying the virus and not responding although he has been,doing all he could since January. What has she done just to protect the health of her own members? “We’re not prepared for it.” What a good thing that Trump didn’t say that but just had to deal with it as it hit.