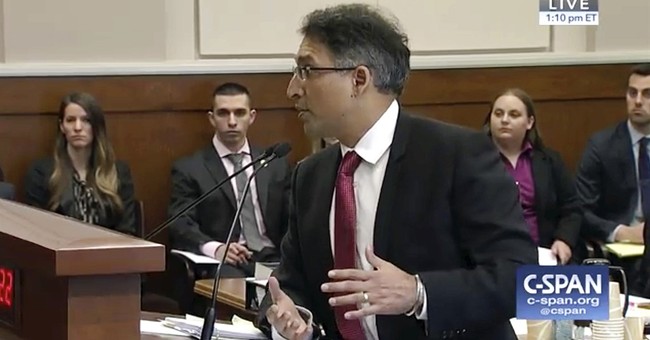 In this frame from C-SPAN video during the 9th Circuit Court of Appeals panel, Neal Katyal, Attorney for Hawaii, speaks in Seattle, Monday, May 15, 2017. The 9th Circuit panel is hearing arguments over Hawaii’s lawsuit challenging the travel ban, which would suspend the nation’s refugee program and temporarily bar new visas for citizens of Iran, Libya, Somalia, Sudan, Syria and Yemen. The judges will decide whether to uphold a Hawaii judge’s decision in March that blocked the ban. (CSPAN via AP, POOL)

The anti-Trump brigade has been all-in attacking President Donald Trump over dealing with the Wuhan virus.

Ironic from Democrats who can’t even hold a caucus without it imploding and had over 12,000 die from swine flu under Barack Obama.

The Never Trump folks are really going around the bend, as we reported earlier with folks like Jen Rubin claiming more Republicans would die than Democrats and David Frum inventing smears against the President.

But when you have Obama guy plus Never Trump, you can double down on the ridiculous.

Neal Katyal was the acting solicitor general during the Obama administration and he’s fought Trump’s travel ban in court in a variety of cases. The Supreme Court ultimately upheld the ban. Knowing that and then looking at the tweet he put out makes you say, Trump has really broken people.

Mike Davis, who’s behind the Article 3 Project to help get judges confirmed and was the former Chief Counsel for Nominations to the Senate Judiciary Committee for Sen. Chuck Grassley (R-IA) managed to save the tweet.

And the 19.1K people who liked your tweet need to go into political self-quarantine. pic.twitter.com/Q5ANOyfdKq

Oofah. Really, Neal? And this comports with the Constitution how? Plus, yes, who the heck would like that, knowing it’s not possible and it’s not happening?

Funny thing was he got hammered by those on the left for including George W. Bush in there, so he later apologized for the tweet. Because Bush = Katrina and Iraq to folks on the left. But these folks completely gave Barack Obama a pass on the over 12,000 who died from the swine flu.

I heard the feedback to my tweet, and I decided to delete it. Thanks for checking me. I really appreciate it. Stay safe everyone.

But not before he prompted comment back along the same lines from Never Trump pundit Max Boot.

Ah, sure. Again, not reality. The markets are reacting to global uncertainty. That would crash the economy into the cellar. But you do you, Max.

Then we confirm Hillary Clinton for VP, Pelosi steps down and gets reappointed Speaker.

I may never get my vision back with how far back my eyes just rolled.

I thought they closed the bars in NYC