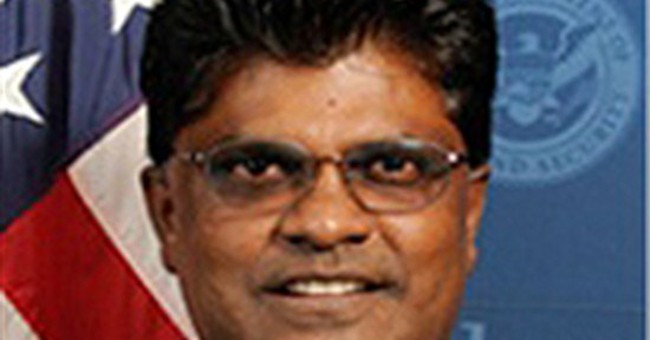 This undated photo obtained from the Department of Homeland Security shows former Acting Inspector General Charles Edwards. A Senate subcommittee says Edwards was too cozy with the political appointees of President Barack Obama whose activities he was supposed to oversee. A 27-page report from a Senate homeland security subcommittee says Charles Edwards improperly rewrote, delayed or classified reports to accommodate the department. It says he also asked for guidance from senior Homeland Security Department officials instead of his own staff. (AP Photo/Homeland Security)

Democrats and their friends in media are fond of claiming that the only scandal in the Obama administration was that he wore a tan suit.

Indeed, whoever runs The Daily Show Twitter account periodically tweets this out. Joe Biden is also fond of saying there was not a “whiff of scandal.”

Of course, that’s utter nonsense. There was unfortunately so much scandal we’re still having to unravel it and investigate it now.

What is true is that virtually no one has ever been held to account for all the many many many scandals of the Obama administration.

On Friday, a jury returned indicted former Obama administration Acting DHS Inspector General Charles Edwards and his former aide, Murali Yamazula Venkata on charges including wire fraud, conspiracy to commit theft of government property, conspiracy to defraud the United States, aggravated identity theft, and theft of government property. Venkata is additionally accused of destroying records, according to a release from the Department of Justice.

Edwards had served as the acting DHS IG from 2011-2013. But when he left, he maintained contact with people within the DHS Office of the Inspector General. Venkata and others (the release does not say who the “others” were) allegedly conspired to steal confidential and proprietary software from the DHS OIG so that Edwards could re-package it and sell it for his own company, Delta Business Solutions.

From Law and Crime:

The indictment further alleges that, in addition to stealing DHS-OIG’s software and the sensitive government databases, Venkata and others also assisted Edwards by reconfiguring his laptop so that he could properly upload the stolen software and databases, provided troubleshooting support whenever Edwards required it, and helped him build a testing server at his residence with the stolen software and databases, which contained PII. As further part of the alleged scheme, Edwards retained software developers in India for the purpose of developing his commercial alternative of DHS-OIG’s software.

Should we even ask about what the DHS head and the new IG who were in charge between those times were doing while this was going on?

But this wasn’t the first question raised about Edwards.

Edwards, who, as the acting IG, was supposed to be looking out for the ethical standards at the DHS. But he resigned in the middle of a whistleblower scandal where he was accused of unethical actions in December of 2013, days before a Senate hearing on the allegations.

A Senate Homeland Security Committee found a complete mess in how Edwards was handling the office. The report is a festival of how not to run an independent office, from allegedly not knowing what he was doing to allegedly using its resources for his own personal ends. Among other things they found that he “altered and delayed investigations at the request of senior administration officials, compromising his independent role as an inspector general.” They found he compromised his objectivity by being friends with the DHS officials he was supposed to be independent of and changed things on their request. They looked into allegations but did not confirm that Edwards was involved in reports being altered to avoid embarrassing the Obama administration in an election about the 2012 Secret Service prostitution scandal (remember that scandal?).

But they did determine that “certain information” from a draft report was “altered or removed” before the final release. The lead investigator told the subcommittee that he was directed by his supervisor “to delete derogatory information” — information considered “potentially damaging to the administration.”

According to the report, the same investigator said he told an internal review team that he had concerns with deleting this material because: “The DHS OIG was sitting on information that could influence an election.” […]

The office of former DHS Secretary Janet Napolitano pushed back on the details in the Senate report.

According to The Washington Post, her office said neither Napolitano nor her staff “ordered that anything be deleted” in the report on the Secret Service.

Interestingly, Edwards, when he was in office, was also in charge of looking into allegations against Alejandro Mayorkas, the DHS’ Citizenship and Immigration Services director. Mayorkas had been nominated to the DHS’ number two position in 2013, but was being questioned over allegations about leveraging influence to obtain expedited visas for foreign investors. An IG report that ultimately came out in 2015 scolded Mayorkas for allegedly repeatedly intervening on behalf of well-connected participants in an investor-visa program, including Gov. Terry McAuliffe (D-Va.) and Tony Rodham, a brother of former Secretary of State Hillary Clinton.

The inspector general report faults Deputy Secretary of Homeland Security Alejandro Mayorkas for creating “an appearance of favoritism and special access” as a result of highly unusual steps he took while serving as director of U.S. Citizenship and Immigration Services, which oversaw the investment-based program known as EB-5.

“Mayorkas communicated with stakeholders on substantive issues, outside of the normal adjudicatory process and intervened with the career USCIS staff in ways that benefited the stakeholders,” Inspector General John Roth wrote. “In … three instances, but for Mr. Mayorkas’s intervention, the matter would have been decided differently.” [….]

The report also draws attention to the role played by Rodham, who ran an EB-5 visa investment known as Gulf Coast Funds Management, which directed funds to GreenTech. Rodham’s sister was secretary of state during much of the time that Gulf Coast and GreenTech were pressing USCIS for approvals to accept investments that could lead to green cards for foreigners willing to front up more than $550,000 in principal and fees.

DHS head in 2015 said in response to the report that he had confidence in Mayorkas, that he needed to be cautious about intervening in cases. Mayorkas said he disagreed with the conclusions of the report. Mayorkas went on to work for Wilmer Hale, the same law firm in which Robert Mueller is a partner. He’s leading their coronavirus task force.

But remember no scandals in the Obama administration.