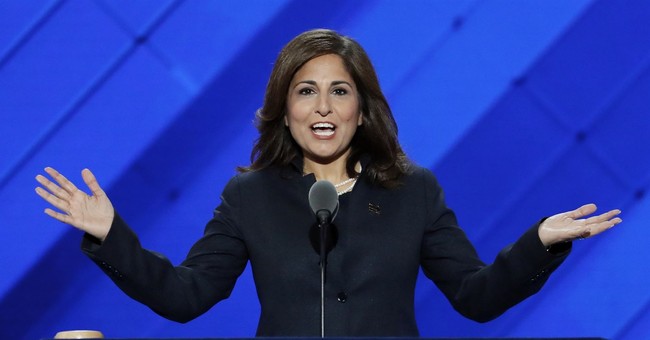 FILE – In this July 27, 2016, file photo, Neera Tanden, president of the Center for American Progress, speaks at the Democratic National Convention in Philadelphia. A major liberal policy group is raising the ante on the health care debate with a new plan that builds on Medicare to guarantee coverage for all. Called “Medicare Extra for All,” the proposal to be released Feb. 22, 2018, by the Center for American Progress gives politically energized Democrats more options to achieve a long-sought goal. (AP Photo/J. Scott Applewhite, File)

Democrats are in a bit of a bind.

The only two candidates they have who are viable of the nomination are a socialist and a man who has been facing questions of cognitive decline.

Establishment Democrats are doing everything they can to cut Sen. Bernie Sanders (I-VT) out of the nomination and push and protect Joe Biden ahead to the nomination.

While Joe Biden came back in South Carolina and Super Tuesday, it seems less because of anything he did and more because of the intervention of others, like Rep. Jim Clyburn (D-SC) who gave him a critical endorsement and some folks like Barack Obama reportedly arm-twisting behind the scenes to get people to endorse him like Pete Buttigieg (while Obama is not endorsing him publicly himself).

As my colleague Elizabeth Vaughn observed, some like CNBC’s Jake Novak are counseling that the Democrats’ best bet with Biden is for him to keep a low profile so that all his problems are not readily apparent, although Novak couches as his “personality, demeanor on the campaign trail, and his debate performances are all weak by contrast,” and leaves the questions of decline to “the medical experts.”

But Americans who have seen videos after video of issues with Biden, kindly termed as “gaffes,” are still raising the question. Nobody is making a medical determination, you can’t do that without being a doctor who has examined a patient. But people are observing an issue.

Yes, some Democrats and/or progressives are going there too, whether the Democratic establishment likes it or not.

They’re making the pretty cogent point that Biden can’t hide forever and President Donald Trump isn’t going to hold back on him in a general election, so it’s going to come out. Not to mention, that it’s irresponsible and not right to vote for someone who you think may have significant issues that will impair his ability to do the job. Now, obviously some of them are Bernie supporters. But that doesn’t make them any less right. They’re also chastising the Democrats who are refusing to acknowledge there’s a problem.

Here’s @mehdirhasan on how self-delusional and willfully blind Democratic Party elites are being when it comes the grim, ugly, uncomfortable reality of Joe Biden because of how desperate they are to stop Sanders:https://t.co/tLoxOLdfZN https://t.co/csodi9vkfm

The difference is actually stunning. I was at the debate against Paul Ryan and Joe was so skilled and sharp! https://t.co/OMDFf2I5CZ

Democratic insiders know Biden has cognitive decline issues. They joke about it. They don’t care.

That’s not making folks like Clintonista Neera Tanden happy. Tanden, the President of the Center for American Progress, a liberal think tank in Washington, DC, worked with the Clintons for years, she’s also worked for the Obama campaign and administration. So it’s probably pretty safe to say that makes her a standard bearer for Democratic establishment politics.

She responded to Stoller saying that “It was beneath him” to raise the concern. Shh! You’re not supposed to talk about that! Get back in line!

This is really beneath you.

I’ve never heard any Democrat talk like this. I expect these kinds of low attacks from Sean Hannity. Not an intellectual of the progressive cause. It’s pathetic.

So what does this say that Democrats like her aren’t raising the concern? That maybe Stoller is a little more intellectually honest, regardless of what political side he’s one or who he is supporting?

They’re truly boxing themselves in by “hiden’ Biden.” They may get the nomination but he’s going to be eaten alive by Trump and the Bernie Bros are going to be saying “see, we told you so.”