Breaking: Amy Klobuchar Is Out, Announces Who She Will Endorse and the Behind the Scenes Pressure 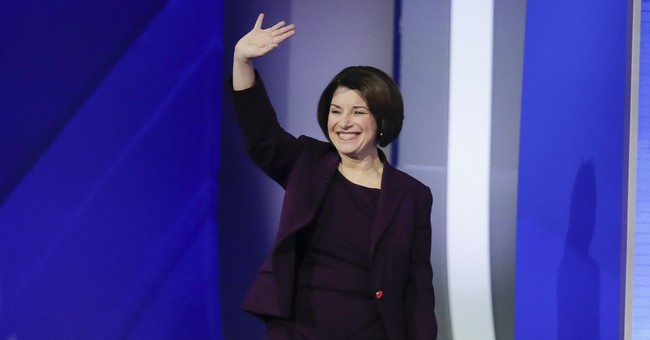 After Joe Biden won the South Carolina primary convincingly, looks like a little subtle pressure has been going on behind the scenes to have folks drop out and get behind him to maximize his chances against Sen. Bernie Sanders.

First, Pete Buttigieg dropped out yesterday, within hours of telling Meet the Press that he would be pressing on through Super Tuesday, leaving people to wonder what kind of deal he might have cut behind the scenes, perhaps a position in a presumptive Democratic administration.

According to the New York Times, both Joe Biden and Barack Obama had a conversation behind the scenes with Pete Buttigieg on Sunday after he dropped out.

Mr. Buttigieg talked with Mr. Biden and former President Barack Obama on Sunday night, according to a Democratic official familiar with the conversations. Mr. Biden asked for Mr. Buttigieg’s support and the former mayor indicated he would consider the request. Mr. Buttigieg wants to sleep on the decision, he told aides, some of whom believe he should move quickly to endorse Mr. Biden.

Mr. Obama did not specifically encourage Mr. Buttigieg to endorse Mr. Biden, said the official, who insisted on anonymity to discuss private conversations. But Mr. Obama did note that Mr. Buttigieg has considerable leverage at the moment and should think about how best to use it. Should Mr. Buttigieg endorse Mr. Biden on Monday, it could reshape the Democratic primary if many of his supporters shift to Mr. Biden, creating a more formidable centrist challenge to Mr. Sanders’s progressive movement.

Now, Amy Klobuchar has just announced that she’s dropping out and that she will be endorsing Biden.

NEWS: @amyklobuchar confirms the Senator is flying to Dallas to join @JoeBiden at his rally tonight where she will suspend her campaign and endorse the Vice President.

It’s intriguing that both are dropping just before Super Tuesday, rather than waiting until after. It sounds like whatever is being offered behind the scenes must be a pretty good offer if they aren’t even willing to go one more day to see what they can do. It also means someone thinks it’s going to be a tight fight and they’re doing all they can do at this point to try to maximize it for Biden.

But in some sense, she may have just helped Sanders in Minnesota. That was the one state that she was predicted to have an impact on, she and Bernie were battling it out there. Now that may throw more votes to Sanders.

Amy Klobuchar is throwing in the stapler

With Klobuchar dropping out, Biden only needs to collect the Bloomberg stone to complete the moderate gauntlet

I love these people blubbering about how Buttigieg and Klobuchar are being selfless by dropping out. They have no chance of winning. They’re dropping out because it’s in their best interest and they want a spot in Biden’s administration. It’s not a selfless act you silly fools.

Stick a comb in it, she's done.