Disgraceful: Krugman and NY Times Op-Ed Colleague Do More Politicizing of the Coronavirus to Attack Trump 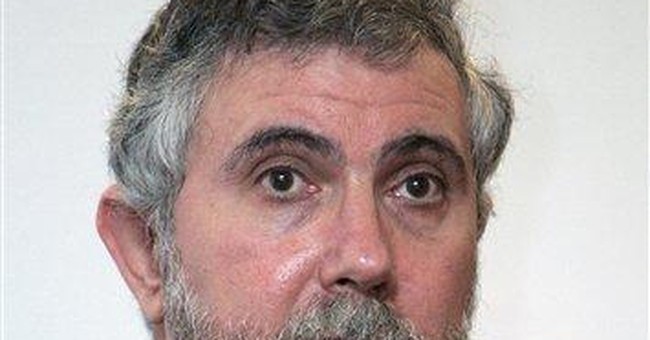 As we reported on Friday, TDS-ridden Paul Krugman seemed to be celebrating the drop of the DOW to 25,000.

He also wrote an article, “When a Pandemic Meets a Personality Cult” whose title tells you everything you need to know with how twisted he is. Among the other falsehoods he claims in the article is that President Donald Trump cut the CDC which is patently untrue, funds have actually increased.

He doesn’t care about spreading falsehoods fear mongering as long as it serves the narrative of attack.

When you’re more about attacking the president than about talking honestly about a virus, you really need to check yourself.

Unfortunately, with Krugman, he seems lacking in any kind of self-awareness.

Both Krugman and another NY Times op-ed columnist, Gail Collins, tried to get the term “Trumpvirus” going, as the Washington Examiner’s Byron York pointed out.

Boring but possibly useful thread on economics of Trumpvirus. Econ 101 tells us that there are two kinds of macro shocks: demand shocks like 2008 financial crisis and supply shocks like 1979 oil crisis. Policy implications differ 1/

Now, the virus started in China, has barely scratched the shores here, with very few cases, in part because President Donald Trump acted quickly about a month ago to restrict entry from affected areas in China.

Listen to Dr. Anthony Fauci of the National Institute of Allergy and Infectious Diseases (NIAID) praising Trump for restricting entry from infected areas of China about a month ago, noting that’s likely reduced the spread by Trump being proactive.

Dr. Anthony Fauci: If President @realDonaldTrump had not prevented travel from China “we would have had many many more cases” in the U.S. pic.twitter.com/K5qetK6dij

Trump also formed a task force to address the issue over a month ago, in addition to the folks already on the job, like Fauci. Media’s response at the time? Why wasn’t the task force more “diverse?”

But New York Times folks like Krugman and Collins want to sell you on the term and somehow blame Trump for it?

But sure, media and Democrats aren’t politicizing it, right? They don’t take a side, right?