Busted: Mike Bloomberg Runs Anti-Trump Ad With Migrants in 'Cages,' but Pics Are From Obama-Era

In this photograph provided by “Meet the Press,” New York Mayor Mike Bloomberg speaks on NBC’s “Meet the Press” in Washington Sunday, Aug. 9, 2009. Bloomberg opened with remarks about midair collision between a helicopter and, and a single-engine plane over the Hudson Saturday, which killed nine people, including a 15-year-old boy, and Italian tourists on a tour helicopter. Bloomberg said a recovery effort is still underway, that both aircraft are in 30 feet of water with low visibility, that a couple of bodied had been recovered, and that the search would continue until all bodies are found. (AP Photo/NBC, William B. Plowman)

Mike Bloomberg is dropping a bundle trying to do what he can to buy his way into the Democratic nomination.

One thing he spent some of his money on was this ad he just released against President Donald Trump.

“America demanded change and change is what we got,” suggesting all the pictures were from Trump’s presidency.

Alyssa Milano loved it, calling it the “best ad of the political season.”

But apart from being wrong on virtually everything, the pictures that Bloomberg included of illegal aliens in ‘cages’ were from 2014, when Barack Obama was president. Pretty neat trick to blame Trump for that “fundamental transformation.”

The Daily Caller and Twitchy picked up on the trickery.

Here’s from the Bloomberg video:

Detainees sleep and watch television in a holding cell where hundreds of mostly Central American immigrant children are being processed and held at the U.S. Customs and Border Protection Nogales Placement Center on Wednesday, June 18, 2014, in Nogales, Ariz. CPB provided media tours Wednesday of two locations in Brownsville, Texas, and Nogales, that have been central to processing the more than 47,000 unaccompanied children who have entered the country illegally since Oct. 1. (AP Photo/Ross D. Franklin, Pool)

You can see all the matching elements if you zoom in on the Obama picture – person with legs sticking out from under the blanket, five people in white shirts on bench, black shirt person on bench, etc.

FILE – This June 18, 2014, file photo shows young detainees being escorted to an area to make phone calls as hundreds of mostly Central American immigrant children are being processed and held at the U.S. Customs and Border Protection Nogales Placement Center in Nogales, Ariz. Thousands of immigrant children crossing alone into the U.S. can live in American cities, attend public schools and possibly work here for years without consequences. The chief reasons are an overburdened, deeply flawed system of immigration courts and a 2002 law intended to protect children’s welfare, an Associated Press investigation finds. (AP Photo/Ross D. Franklin, Pool, File)

Can’t get a video or a caucus right. 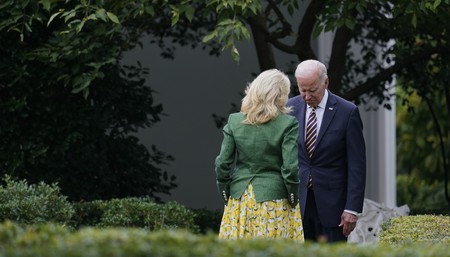