There is a new poll out, showing that registered voters believe Republicans will handle the major issues facing America better than the Democrats are handling them. This is an encouraging poll for the GOP, but they can’t take their foot off the gas until they win back the majority in the House and Senate.

As I reported earlier this week, some GOP Senators are trying to temper the expectations for the Senate races. But that might also be their way of encouraging more people to vote. If the GOP base gets out in droves and votes in November, they will win the majority in the House and Senate. The Senate will be tougher because there are 21 Republican seats up for reelection and just 14 Democratic seats, but the House seems to be going GOP’s way.

Would do a better job handling…

“Between passage of the Inflation Reduction Act, killing al Qaeda’s leader, less pain at the pump, and the Republican-appointed Supreme Court justices taking away abortion rights, the political landscape is less horrible for Democrats … There are successes Democrats can point to that didn’t exist in the spring, but the biggest single change I see in this poll is the increased disapproval of the Supreme Court and suspect that is a significant factor.”

“In recent congressional elections, an even ballot test has meant the Republicans are extremely likely to win a majority of seats … This is because of two things. One, Democrats are more geographically concentrated in a smaller set of districts and two, Republicans have drawn more districts to their advantage. This effect should remain in 2022, although it may be diminished after the latest round of redistricting.”

The majority of people surveyed say it is important to investigate Hunter Biden and January 6. 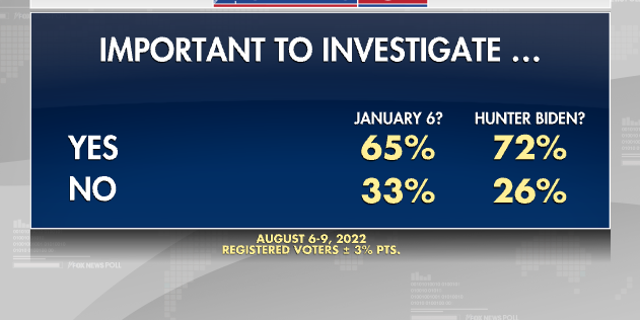 This is an encouraging poll for the GOP, but there is still a lot of work to do to win the Senate majority. If the GOP voters come out in droves, they will win the majority. If some sit out, then it ensures a win for the Democrats.

Levon Satamian has a bachelor's degree in broadcast journalism from the California State University of Northridge. He is a sports columnist and political writer for RedState. His Twitter is @Levon824