Kira Davis: The Loyalties of CA Voters and Black Voters Have Reaped the Same Dreadful Consequences 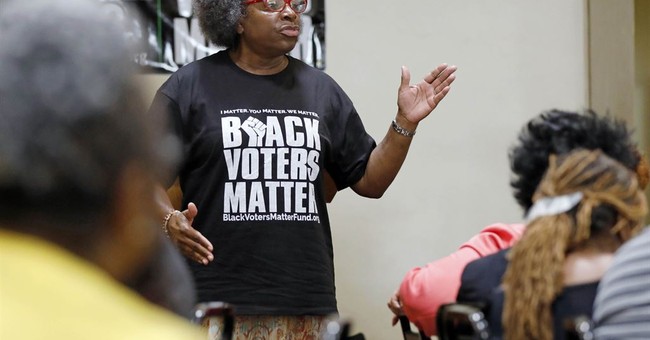 In this Aug. 24, 2018 photo, Betty L. Petty of Sunflower County Parents and Students United, addresses a meeting of the Black Voters Matter Fund and several Mississippi grassroots organizations at MACE, Mississippi Action for Community Education, headquarters in Greenville, Miss. Democrats and Democratic-affiliated groups are making strategic shifts to ensure that in November the party avoids a problem that has bedeviled it in years past: low turnout in off-year elections. (AP Photo/Rogelio V. Solis)

My friend and colleague Christopher Arps is often attacked for being black and Republican. The typical question he gets is, “How can you be a Republican? What has the Republican party ever done for you?”

Chris’ answer is one I’ve parroted myself ever since I first heard it.

“I don’t want the Republican party to do anything for me. I want them to lower taxes, keep government interference to a minimum and get the hell out of my way so I can take care of myself the way I see fit.”

In California, voters have sold out to the Democrat party in such high numbers that they now hold a supermajority in the state legislature. That means that anything and everything they come up with gets passed. With a governor in office who is solely focused on running for president one day, there is no one to veto anything. In 2020 alone, there are over 2200 new bills waiting to make their way through the legislature. There are no incentives to slow down. There are no roadblocks. There is no party opposition. Americans like to complain about the “gridlock” in Congress but the truth is that’s how the Founding Fathers intended it to be. It should be difficult to impose new laws and legislation on the American people. When it’s easy you get California.

Now here we are, in a situation in this state in which faithful Democrat voters are now being crushed by the very lawmakers they trusted. They have learned to hate the opposing party and, in doing so, have created an environment in which the opposing party is basically gutted and ineffective. Seems ideal if you’re a Democrat, no?

The sad reality has hit us all in ways none of us ever saw coming. This is what happens when you don’t have a voice in the opposing party. One party rule can quickly turn to fascism if there are no checks and balances. California voters in our major urban centers have spoken for the rest of the state and decided they don’t want an opposing party in Sacramento, but the result has been to rob us all of any balance and any voices that might cause the legislature to at least pause before they obliterate the livelihoods of a million people. We need voices on the other side of the aisle, and not just because we need a pushback.

What we need is a stake in the game no matter who is in office.

Nationally, black voters have the same issue. My friend Chris may catch a lot of flack for being a Republican, but he understands that politics are cyclical. One party doesn’t get to rule all of the time. While we were all wringing our hands and fussing about whether or not Trump could actually win the White House in 2016, the one thing most people forgot about was that we were in a Republican cycle. Generally speaking, most Americans tire of the party in office no matter who it is. Sometimes a change is as good as a rest and it is statistically rare for Americans to not make the switch after a term is up.

If we know that Democrats will not be in federal office forever, does it not behoove us to be invested in some way in the opposing party? Like California voters, black voters find themselves in a position to be ignored, used and abused because we have left ourselves no room for negotiation. Statistically, we are so sold out to one party that when the other party comes to office (as they always do, eventually), we feel upset, frightened and desperate. That is how the Democrat party likes us to feel. Fear keeps our votes firmly rooted in their camp and it’s why they never bring real solutions. If any of our issues are ever really solved, there goes their leverage in the black community.

If we had greater representation in both parties, the landscape would begin to look a lot different for us.

I’m not suggesting California voters should automatically switch party preference. I’m not suggesting black voters should all suddenly become Republicans. What I am suggesting is that perhaps it would be wise for us to stop insulting those who do choose to cross the aisle. In fact, perhaps some of us might actually want to reexamine our voting values and see if we need to be the ones crossing the aisle for an election or two. If we allow ourselves to be exclusively beholden to one party, there is absolutely no incentive for said party to actually care for our interests.

In California and in black America the Democrats have happily taken our undying loyalty and in return given us nothing but platitudes and debt. If we ever want them to take us seriously again, we have to make sure our stakes are planted elsewhere once in a while.