Author of CA's AB5 Is Also Behind "Motor Voter" and Ballot Harvesting Laws; Wants To Be Next Sec of State 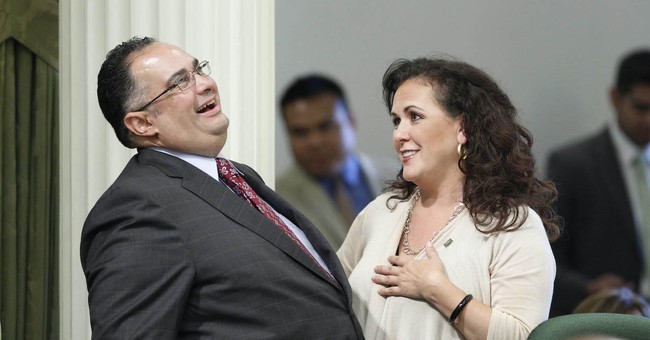 Assembly Speaker John Perez, D-Los Angeles, gets a laugh from a comment made by new Assemblywoman Lorena Gonzalez, D-San Diego, as the Assembly plowed through dozens of bills at the Capitol in Sacramento, Calif., Thursday, May 30, 2013. Gonzales was sworn in to the Assembly Tuesday after winning last week’s special election for the 80th Assembly district seat.(AP Photo/Rich Pedroncelli)

California Assemblywoman Lorena Gonzalez first showed up on the radar of many Californians and political watchers due to her anti-freelancing bill, AB5, which prohibits Californians from being able to choose how, when, and where to labor. Many don’t know, though, that she is essentially behind California’s “Blue Wave” in 2018 and is running for California Secretary of State in 2022.

How is Gonzalez, the former Teamsters boss, responsible for California’s 2018 Blue Wave, you ask? She is the legislator who authored both California’s terrible, completely disastrous Motor Voter law and its ballot harvesting law.

For those who are unfamiliar with the Motor Voter law, essentially any time a Californian interacts with the DMV, whether to get a drivers license or state ID card, or even to simply renew a license, registration, or purchase personalized plates, they’re registered to vote unless they affirmatively decline:

I’ve written extensively on California’s ballot harvesting law and its shortcomings; my most comprehensive piece can be found here. But, as this report from Stanford University’s Hoover Institution argues, Motor Voter could be the more harmful piece of legislation:

The funny thing about the aftermath of the last election in California: the media did their best to debunk the notion that “ballot harvesting” unfairly swung elections the Democrats’ way, without paying much attention to the potential impact of the “motor voter” program (which, according to post-election data, might have cost Republicans one of the seven Orange County seats).

Indeed, “motor voter” registration remains a legitimate concern as California prepares for next year’s statewide vote—or so one gleans from a state government audit released last week that shows the DMV can’t say with certainty who’s participating in California’s elections and whether would-be voter information is being processed correctly.

Now Gonzalez has her sights set on becoming Secretary of State in 2022, where she and her office (and the unions) would control the voter rolls, vet signatures to determine if a proposed ballot initiative qualifies for the ballot, print election ballots, count votes, handle all corporate registrations and filings, and more. If there is any doubt that labor unions would play a key role in the functioning of the Secretary of State’s office should Gonzalez be elected, consider the fact that she admitted that while AB5 was being considered in the legislature, the AFL-CIO typed up the form used to request exemption from the proposed law and “held meetings with groups of folks seeking clarification” (emphasis mine).

There is no good reason for #AB5. Unions were the authors, not merely involved in it.
My colleagues tried to give their input about our profession and they were given a form and told to contact AFL-CIO. That’s the extent of OUR involvement as a profession. pic.twitter.com/sEf2IIFyer

In addition to all of the responsibilities listed above, the next Secretary of State faces the daunting task of upgrading the office’s technological systems, which are a complete mess. The unions desperately want in on all of that, and are investing heavily in Mrs. Gonzalez-Fletcher’s candidacy. Californians who care about free and fair elections and wish to operate their businesses free of an environment of threatened and real government retaliation against political opponents must ensure that she is never elected.