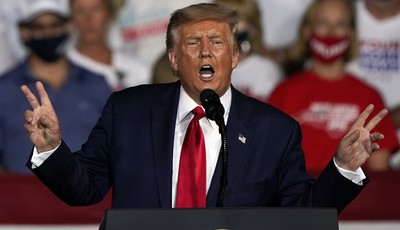 Will this finally be the beginning of the end of U.S. involvement in unnecessary military activities overseas? On Wednesday, the Trump administration announced that it will be pulling 1,200 troops out of Iraq in September. This is part of the President’s effort to keep his promise of stopping “endless wars.”

CBS News reported that General Frank McKenzie “announced the number of troops in Iraq would be reduced from roughly 5,200 to 3,000.” The general’s announcement was made during a change of command ceremony with Iraq’s defense minister.

“This reduced footprint allows us to continue advising and assisting our Iraqi partners in rooting out the final remnants of ISIS in Iraq and ensuring its enduring defeat,” McKenzie explained. “This decision is due to our confidence in the Iraqi Security Forces’ increased ability to operate independently.”

The General pointed out that the decision to withdraw American soldiers from Iraq is a “clear demonstration of our continued commitment to the ultimate goal, which is an Iraqi Security Force that is capable of preventing an ISIS resurgence and of securing Iraq’s sovereignty without external assistance.”

The news about the Iraq troop withdrawal is certainly welcome for those who have grown weary of our soldiers being in harm’s way. But there is even better news: The U.S. could be removing more troops from Afghanistan in the near future, as well.

According to CBS News, a “senior administration official” indicated that the White House would be making another announcement about troops in Afghanistan in the “coming days.”

If this is the beginning of a major withdrawal of American troops from foreign countries, it would be the ultimate fulfillment of one of President Trump’s most often-repeated campaign promises. Not only is he bringing our soldiers back from military conflicts in Iraq and Afghanistan, but he also announced in July that we would be removing 12,000 from Germany.

The President’s decision is likely to ruffle the feathers of the neocon elite. Indeed, the Lincoln Project faction will certainly whine about this move. But does anyone truly care what the Bill Kristols and Rick Wilsons of the world think at this point? It doesn’t seem likely.

However, it is worth noting that despite the President’s push for ending foreign entanglements, these folks will be fighting him every step of the way. If Trump manages to win re-election, he will still have his work cut out for him when it comes to reining in America’s military presence overseas.

How the Highland Park Shooter Reportedly Obtained His Guns Is Beyond Ridiculous
Townhall
Lauren Boebert SHREDS Eric Swalwell for trying to tie her to Highland Park gunman SO savagely 'Fang Fang' trends
Twitchy
Chris Pratt's "The Terminal List" Is Sending Leftists Into Conniption Fits While Audiences Love It
Redstate
Yes, Ukraine Has a Nazi Problem, and Its Name Is Andrej Melnyk
PJ Media