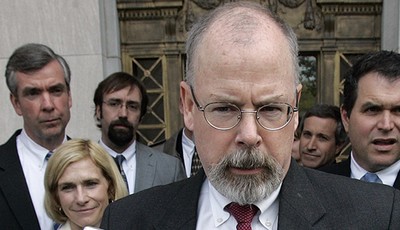 White House Chief of Staff Mark Meadows recently indicated that we might be seeing more developments coming from special counsel John Durham’s investigation. According to Meadows, who was previously a congressional investigator, those being targeted in the probe might be in for a world of hurt.

On Tuesday, Meadows made an appearance on Fox Business in which he explained the situation to anchor Maria Bartiromo. He stated that he did not have an update on Durham’s probe, but he indicated that the records he has seen cast a negative light on the FBI officials involved in the origins of the Russian interference investigation, specifically, those who were looking into ties between the Russian government and President Trump’s 2016 campaign members.

During his appearance, Meadows said:

“Additional documents that I’ve been able to review say that a number of the players, the Peter Strzoks, the Andy McCabes, the James Comeys, and even others in the administration previously are in real trouble because of their willingness to participate in an unlawful act and I use the word unlawful at best, it broke all kinds of protocols and at worst people should go to jail as I mentioned previously.”

At this point, Durham has charged one person with crimes involved with the Russiagate probe. Former FBI lawyer Kevin Clinesmith entered a guilty plea last month after he was charged with making false statements. He is alleged to have fraudulently altered a CIA email during the process of seeking a permit to wiretap former Trump campaign adviser Carter Page.

The Chief of Staff also commented on former FBI agent Peter Strzok, who is currently making the rounds to promote his new book in which he attempts to justify the conduct of the agents involved in the Russia probe and claims that Trump was “compromised” by the Kremlin. Meadows stated that the documents he viewed did not support Strzok’s claim and insisted that the President “encouraged not only declassification, but full transparency.”

Durham’s investigation has been met with scorn and derision from the Democrats, who are claiming that it is motivated by politics. With no sense of irony, they have castigated Attorney General William Barr and Durham for supposedly using the Department of Justice to target Trump’s enemies. The pot and the kettle come to mind, don’t they?

National Security attorney Bradley Moss posted a tweeted questioning why Meadows would have been allowed to view documents pertaining to Durham’s probe. “Why would the [White House] know the details of what Durham has been reviewing?” he wrote.

Moss also argued that it would be “highly inappropriate” for the Chief of Staff to view privileged information. “It would be highly inappropriate for there to be White House coordination with Durham’s probe in this manner,” he told Law&Crime. “However, it is not clear Meadows has actually seen something only Durham would know about or if he is merely referencing documents Congressional allies sent to Durham for consideration.”

Susan Hennessey, a former Intelligence Community attorney, also weighed in on Twitter. “It’s not clear Meadows is actually referring to documents provided by DOJ or investigation materials. He just says it’s something he claims is relevant,” she asserted. “I think there are even odds he’s just trying to spin a story out of some dumb internet conspiracy.”

Walter Shaub, who used to head the U.S. Office of Government Ethics, excoriated the Trump administration, stating that the White House “is corruptly using the Justice Department as a political weapon, just as leaders do in authoritarian countries.”

But despite the Democrats’ disingenuous whining, Durham’s investigation continues. If Meadow’s statements are any indication, Clinesmith will not be the only member of the F.B.I. who will face charges. If more indictments are on the horizon, it could mean that not only did the left fail to pin Russia’s election interference on the President, but the whole operation backfired in a major way. After a long investigation, it might be possible that those involved in the attempt to concoct the Russiagate narrative will finally see justice.

Jeff Charles is a freelance writer, political commentator, and contributor for RedState.com. He co-hosts the Red + Black Show. He is also the founder and host of the "A Fresh Perspective" podcast.

If you have any leads or just want to yell at me, hit me up by email: [email protected].