Kimberly Klacik At The RNC: ‘I Want Baltimore To Be An Example’ To The GOP 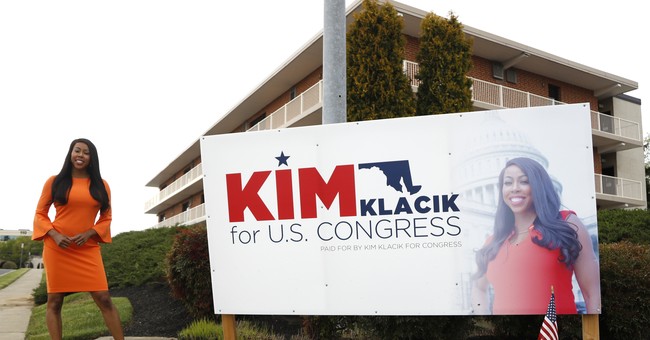 Kimberly Klacik, who is running to represent Maryland’s 7th district in Congress, made quite a splash when she addressed the audience at the Republican National Convention on Monday. Her highly-anticipated speech was expected to be powerful enough to cause MSNBC to cut away from it when it was her turn to speak.

During her speech, Klacik castigated the Democrats for failing the people of Balitimore, Maryland for decades. “The Democrats have controlled my city, Charm City, for over 50 years and they have run this beautiful place into the ground, she said. “We want safety in our neighborhoods. We want jobs and innovation, like tapping the potential of the Port of Baltimore to create manufacturing jobs for Americans. We want lower taxes. We want school choice. We want a chance to get ahead, not just get by!”

Then, Klacik touched on something that has been an issue with the Republican Party for 60 years. She said, “I want Baltimore to be an example to Republicans around the country that we can compete in our inner cities if we reach out to the citizens and deliver real results.”

The GOP has been notoriously inept when it comes to reaching black Americans and other minorities, mostly because it has refused to compete at the local, state, and federal level. But Klacik’s candidacy might provide an example demonstrating how outreach can be done. Even before she ran, she drew national attention to the problems plaguing residents of Baltimore, which has been under Democratic control for about 50 years.

As a congressional candidate, Klacik engages with the community on a regular basis, interacting with residents of the city. Even a cursory glance at her Twitter page will reveal several videos showing her conversing with people living in Baltimore — the very people she is trying to reach.

Anyone who follows me knows that pushing the Republican Party to start engaging with black voters again is one of my highest priorities. Klacik seems to be one of the few who are setting an example for other candidates.

However, it is important to note that the success of these candidacies depends largely on the support they receive from the party itself. Candidates like Aja Smith, Tamika Hamilton, who are both running for congressional seats in California, along with John James, and Antoine Tucker, who are running in Michigan and New York respectively can’t stand against the Democratic political machine alone.

In many cities, the GOP doesn’t bother to run candidates at any level, but the few individuals who decide to run receive little to no support from the party. When we have people like Klacik and others who are running, they must be able to count on the support of the GOP like Democratic candidates can count on their party for support.

Boots on the ground is the only way that the GOP can hope to regain the trust of black Americans. Face-to-face conversations are the most effective way to bridge the gap that has existed since the ‘60s. Regardless of what happens in November, the Republican Party would be wise to emulate people like Kimberly Klacik. With the demographic shift that is on the horizon, failing to create a bigger tent will spell disaster for the former Party of Lincoln. Perhaps her efforts in Baltimore can become the example that the rest of the party can build on.